To get an idea of how much Chris and Quinn LaMorte of Ocean Township, N.J., love their 2011 Skater 36 catamaran consider this: They sort of honeymooned in it. The couple tied the knot near their Garden State home on New Year’s Eve in 2015. The following day, they ran their 36-footer, which is powered by twin Mercury Racing 700 SCi  engines, in the Joey Gratton Memorial New Year’s Day Fun Run in Sarasota, Fla., where the LaMortes keep the boat in the winter. 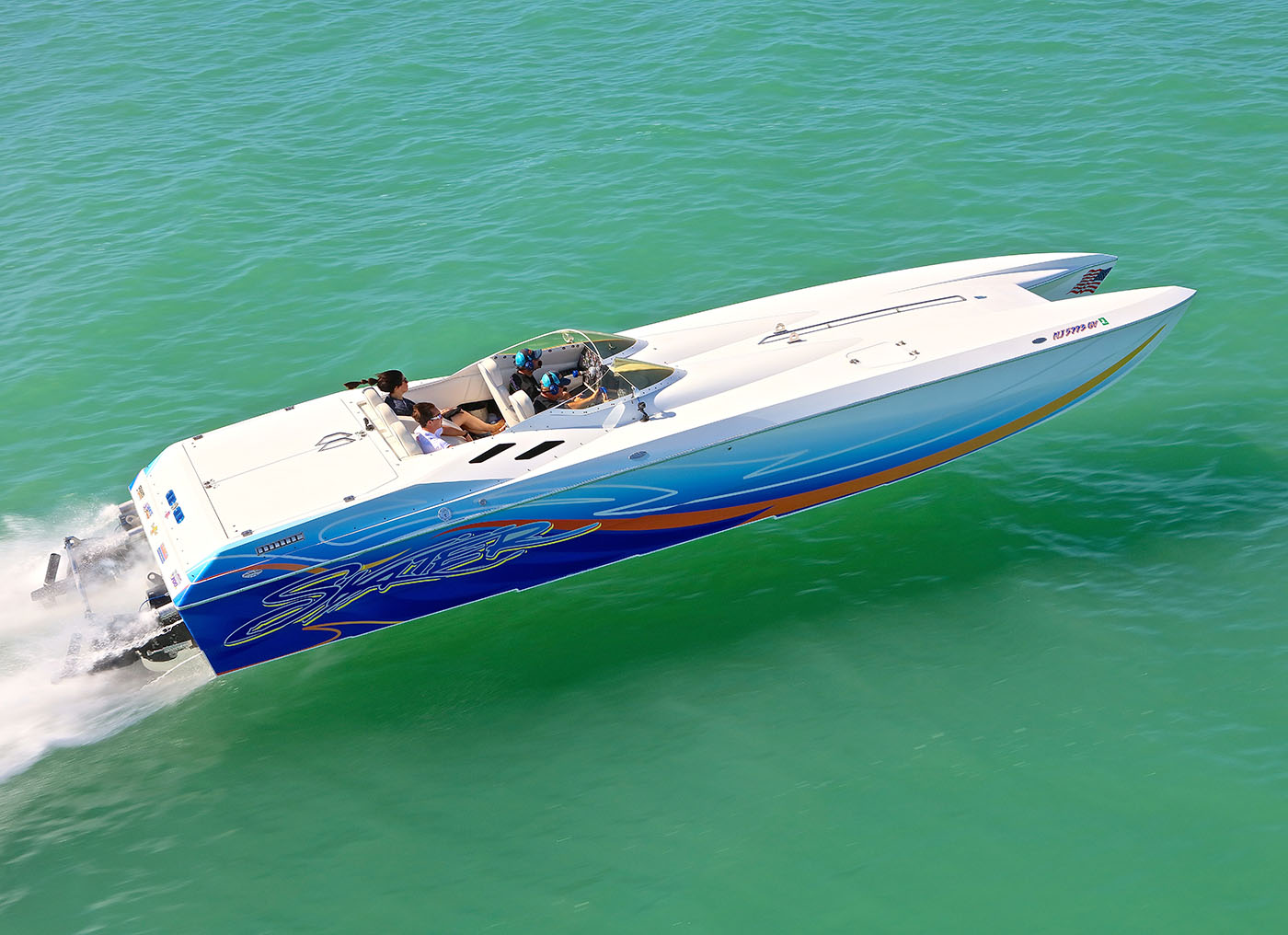 Until recently, Chris and Quinn LaMorte thought their 36-footer was the only Skater catamaran they would need in the foreseeable future. Photo by Pete Boden/Shoot 2 Thrill Pix.

If that’s not love, I’m not sure what is.

Since then, they have run the cat in a slew of events and—by both of their accounts—have been delighted with it. They repowered the boat with its Mercury Racing engines about a year after they married and it has kept them more than satisfied. They certainly didn’t think they needed another Skater catamaran, at least until a 28-footer powered built in 1994 and powered by Mercury Racing 250XS outboards came on the market in Long Island, N.Y., about a week-and-a-half ago.

“A buddy of mine was looking at it but decided it wasn’t the right time for him,” said Chris LaMorte. “But the price was right for us and being a diehard Skater fan it was right up my alley. 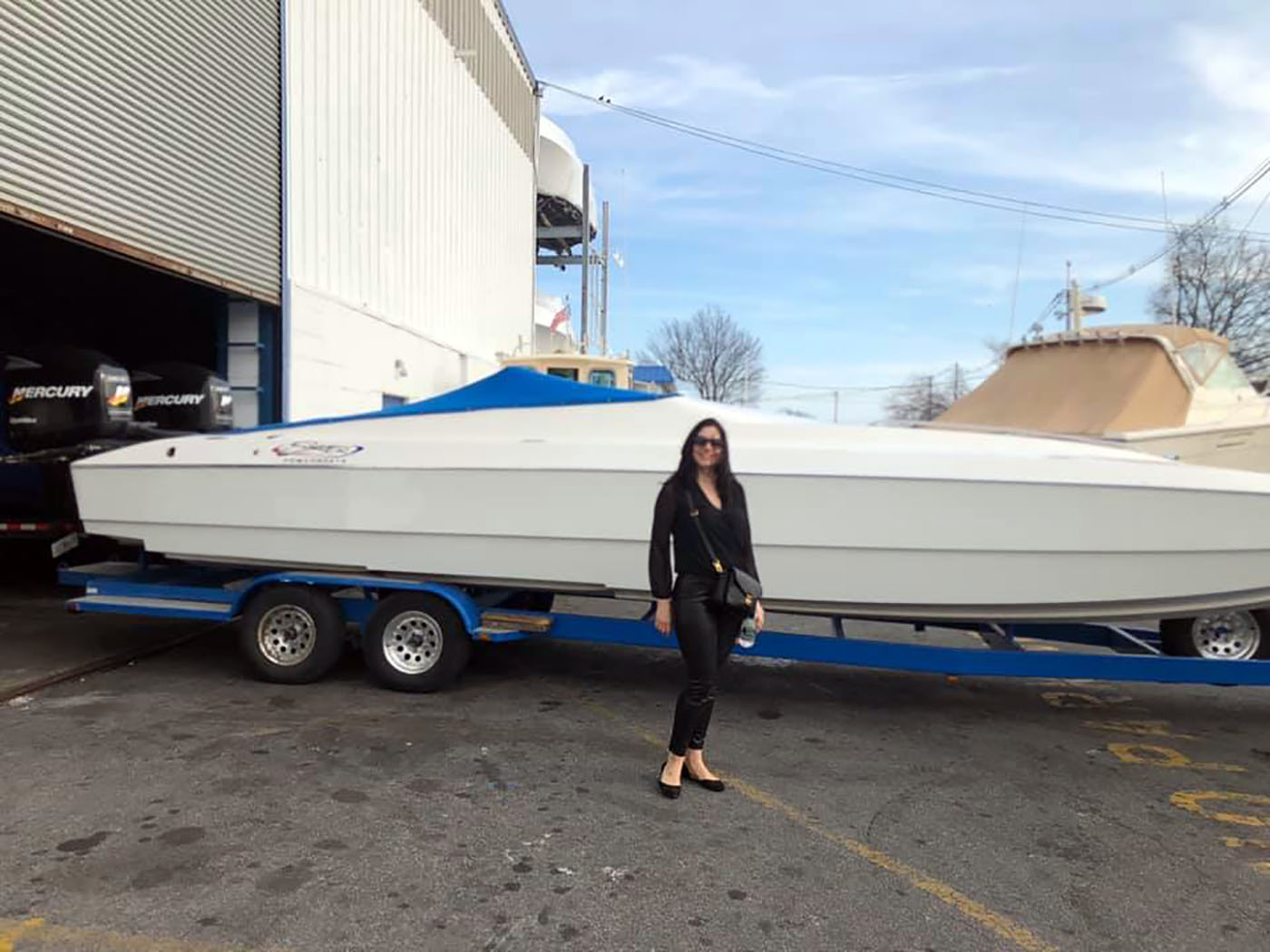 Like her husband, Quinn LaMorte was attracted to this vintage Skater 28 catamaran for its simplicity and ease of use.

“I’ve owned the Skater 36 for eight years now and it’s been great—I love it,” he continued. “But I actually wanted a 28 before I got my 36, so when this one came up I thought it would be a good little second boat—easier to move around, easier to tow and just easier to use overall—for when we don’t want to use the inboard boat. And Quinn was on board with it. She thought it would be cool. If she weren’t into it, I wouldn’t have done it. But she’s really into it.”

LaMorte paused, then laughed. “She’s already calling it her boat,” he said.

Like her husband, Quinn LaMorte was immediately drawn to the outboard-powered Skater 28 for its simplicity.

“Chris didn’t think I would be on board,” she said. “But I like going out with friends and doing trips, and the little boat will be easier to move around and tow.”

So now the LaMortes have two Skater cats, or at least they will when they pick up their 28-foot classic this weekend.

Their immediate plan is to keep the Skater 28 in storage on its trailer near their New Jersey home. Currently at its winter home in Sarasota, the 36-footer will head to Appearance Products in Grand Rapids, Mich., for interior refreshment in the near future. That may mean they campaign their Skater 28 cat in the Jacksonville River Rally and Poker Run in May, which is the next event on their boating schedule.

Chris LaMorte said he’d eventually like to repower the Skater 28, which reportedly tops out at 100 mph, with newer outboards such as Mercury Racing 300R V-8 models. He also said that the 28-footer would be the ideal boat to have on a lift behind a waterfront home he and his wife hope to own someday.

In the meantime, they have the best of stern-drive and outboard-power worlds. And from time to time, they’re going to be glad they have both Skaters at their disposal.

“I told him I might miss the engine noise from the 36,” said Quinn LaMorte with a laugh. “We shall see.”