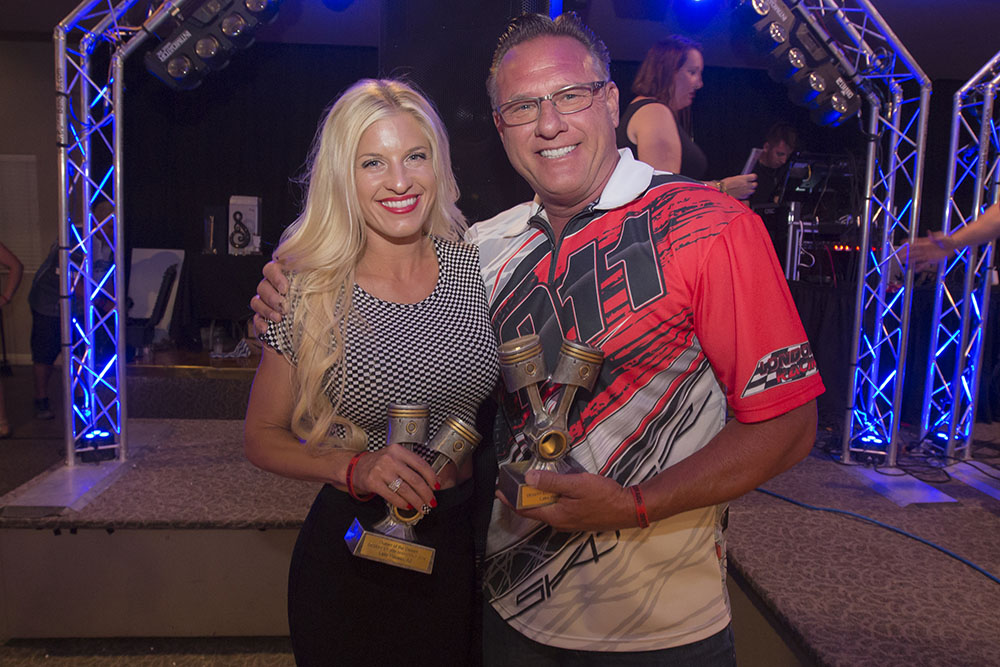 After picking up their trophies for being the fastest overall male and female in the Desert Storm Poker Run Shootout, Summer Richardson and her father, Don London, had a good time at the awards party. Photo by Tom Leigh/Tommy Gun Images

The memories Don London and his daughter, Summer Richardson, created en route to earning this year’s King and Queen of the Desert crowns following two impressive top-speed runs in the same boat on Saturday in the Desert Storm Poker Run Shootout will last a lifetime and then some.

After talking with both Don London and Summer Richardson about their achievements Saturday in the Desert Storm Poker Run Shootout in Lake Havasu City, Ariz., it’s hard to tell who’s more proud of whom—but being a father of two girls myself, I’m going to have to give the nod to Don on this one since he’s awfully proud of his daughter and her ability to run a boat.

Then again, Richardson was extremely proud of how much work her father put in alongside engine guru Carson Brummett to get his Dial 911 Skater Powerboats 388 catamaran ready to lay down a jaw-dropping overall-best 185 mph on the event’s new three-quarter-mile course. And while she was 32 mph off her father’s clip after they switched out the seats so she could run Dial 911, Richardson still rattled off an impressive 153-mph pass—she told her mom, Connie, she’d keep it around 130 mph after pushing it up to 176 mph on Desert Storm’s one-mile track in 2016 so she might have some explaining to do.

The Queen of the Desert, Summer Richardson reached 153 mph on the event’s new three-quarter-mile course in the Dial 911 Skater. Photo by Tom Leigh

Kidding aside, the fact that the father-daughter team from Southern California kept its focus after a very busy week of events and hosting friends and family members was pretty impressive. And it’s not the first time it’s happened. In 2013, the daughter and father earned the Queen and King crowns when Richardson ran 138 mph in a DCB F32 catamaran powered by twin Teague Custom Marine 1025EFI engines and London ran 180 mph in the 38-foot Skater that was powered by twin 1,800-hp supercharged Brummett Marine engines back then.

Nowadays—as of about a week ago—the Dial 911 Skater is powered by a pair of Brummett’s latest-and-greatest new turbocharged offerings that make between 1400 hp and 1900 hp, depending on the fuel. According to London, on 91- and 100-octane fuel, the engines produce 1425 hp and 1680 hp respectively. On ethanol, the engines make about 1,900 hp.

“We opted for a slightly smaller turbo than we could have for the simple fact that we wanted more drivability downstairs,” London explained. “We went with a 14-pound window in a wastegate combination. We’re not pulling the same rpm as we did with the PSI engines—I went though the radar trap at 8,000 rpm; we used to be about 8,200 rpm—but the boat gets on it so quick. The drag racer in me loves acceleration. I left the start gate at 28 mph, let the boat roll up and stuck the throttles down, and the feeling was incredible. We chose a little larger prop than we used for the poker run, and while it felt a little wiggly at first, the combination settled down and was perfectly planted at speed. 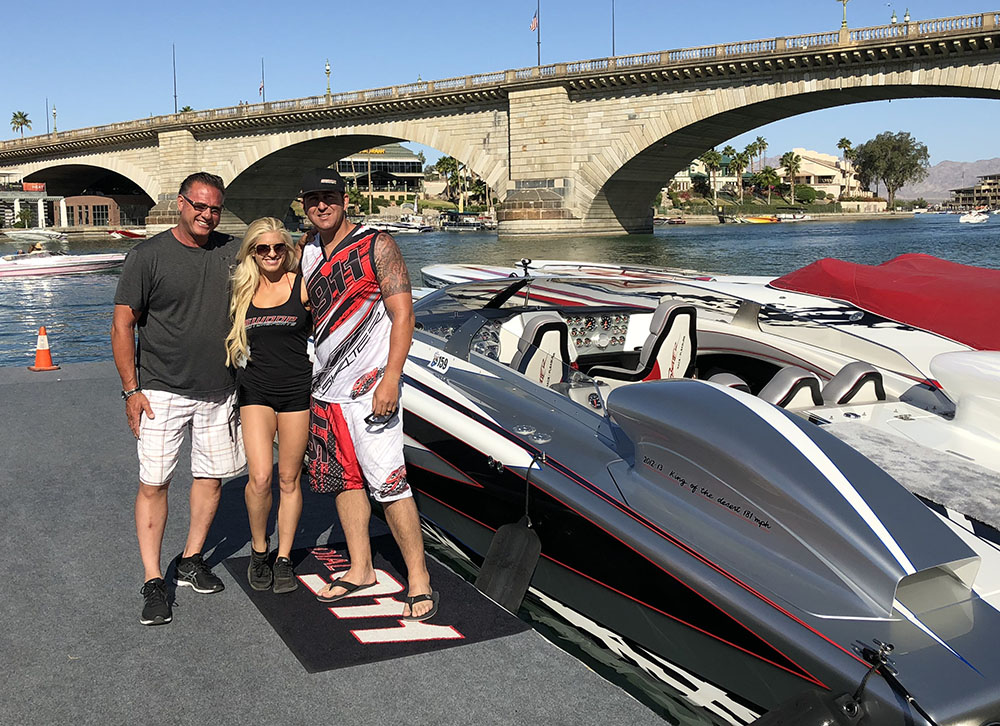 Don London, Summer Richardson and Travis Richardson pose next to the Dial 911 Skater at the London Bridge Resort docks before heading out for the Shootout. Photo courtesy Swoop Motorsports

“I actually hit 192 mph in the boat,” he continued. “We didn’t run nearly that fast in the poker run obviously—we had five people in the boat and were out there to have a good day on the lake. Our family had a phenomenal time all around. Desert Storm is always one of my favorite events of the year, so I try to do everything in my power to put on a good show.”

London, who is toying with the idea of participating in Central Missouri’s Lake of the Ozarks Shootout in August, gave a lot of credit to Carson Brummett for allowing London into his shop to work on the project for several weeks.

“He doesn’t let a lot of people come into his world and work in his toolbox, but we definitely have a closer relationship because of it,” London said. “When you show up every day at 6:30 a.m. and work side by side all day, you get to spend a lot of time talking and learning more about each other.” 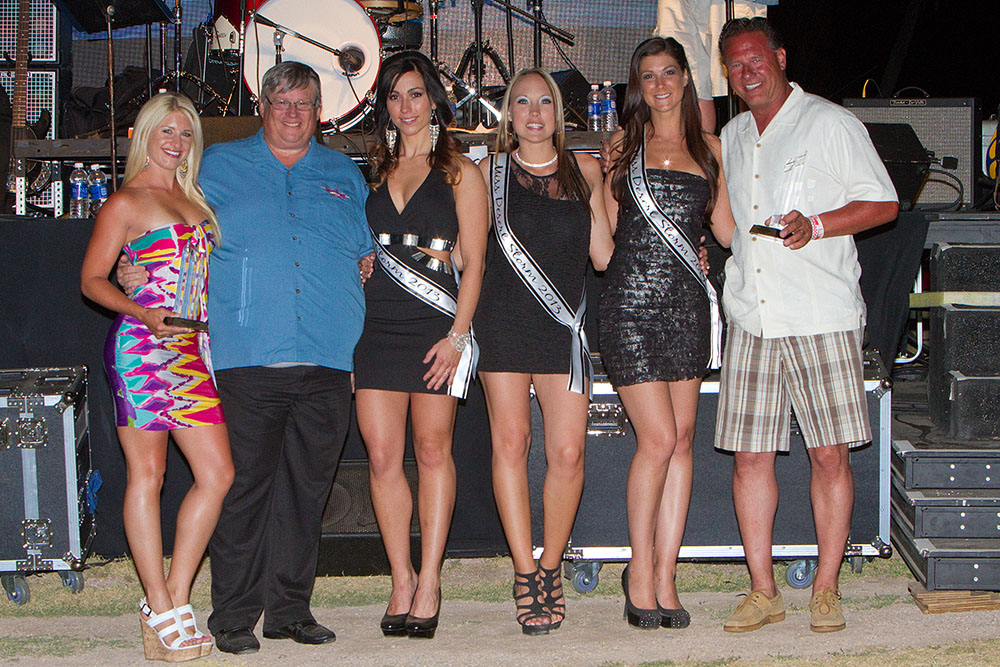 London also credited the supportive team behind it all, including his son-in-law, Travis Richardson, and his youngest daughter, Bree London.

“I promised my family I would stay safe with my runs, especially since I didn’t have any seat time with the new turbos, so I’m happy with my speed on the three-quarter-mile track and even happier to have enjoyed such an incredible time with my family,” said Richardson, who enjoyed Desert Storm despite the fact that the Swoop Motorsports 377 Talon from Hustler Powerboats that her husband and her recently updated had a mechanical issue and sat at the London Bridge Resort docks for most of the event. “I’m so proud of my dad’s speed as it’s not an easy task to conquer. He pushed to make it happen, and with support from Carson Brummett and the crew at Teague Custom Marine, Dial 911 was ready just in time.”

Along with excellent weather and a strong showing of spectators, Richardson said Saturday’s top-speed event is one she will never forget thanks to her and her father repeating as Queen and King of the Desert. She also won’t forget it because the course was closed early after rescue boats were dispatched to a fatal boating accident unrelated to the Shootout (read the story here).

“With the loss of our close boating friends we send our deepest condolences to the families affected by the tragic turn of events,” she said. “We will miss them dearly.”