You are at:Home»Advice»Keys To Key West 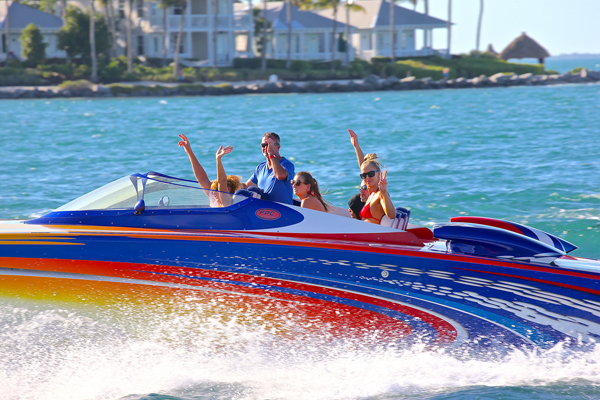 At present, there are more than 180 high-performance powerboats signed up for the 25th annual Florida Powerboat Club Key West Poker Run. Any way you look at it—for example, if each boat averages 40 feet in length, that translates to more than a mile of fiberglass, carbon fiber and such—that’s a lot of catamarans, V-bottom sportboats and performance center consoles to get from Miami’s Biscayne Bay to the city at the end of the road. Think four people per boat, a reasonable number, and you’re talking about more than 700 people, most of whom will head down on Thursday with the club.

I don’t know how this sounds to you from an organizational standpoint, but to me it sounds like a nightmare. I’d rather stick hot needles in my eyes than have to organize an event of this scale. OK, that’s a tad dramatic, but you get my point.

Fortunately, however, Stu Jones of the Florida Powerboat Club doesn’t have a violent aversion to such things. In fact, he’s pretty damn good at it. Sure, he’s had his issues—he’s been punched more than once and cussed out many more times by unhappy customers during the years—but you don’t run a successful for-profit poker-run organizing business for a quarter of a century without being good at it while learning things along the way.

With the annual FPC Key West Poker Run just around the corner, I caught up with Jones—I’ve covered his events since the mid-1990s—yesterday and asked him one question:

What can next week’s poker run participants do to maximize their pleasure and minimize their pain? Here’s what he had to say.

“The safety guidelines are there for a reason: to protect you, your crew and the sport. We cannot afford to have another accident in the high-performance powerboat world. So don’t drink, wear your PFDs and stay with your group.

“Running with boats in a different class is a big no-no. Imagine if you’re in the high-performance class and you get a late start, and you’re running 125 to 130 mph to catch up. Running through a group of 55-mph center consoles at that speed is dangerous and totally uncool.

“We don’t have the entire waterway. Biscayne Bay looks huge, but we’re essentially running on a river through it. It’s an imaginary highway, and we have to stay on it.”

Stick To The Plan

“Understand that there was just a hurricane in the Florida Keys and we had to change many aspects of the event. We have four places for lunch. Pick one and stay with it because it won’t work if people change their minds and go wherever they want.

“We can’t feed 650 people at one place. So stick to the plan we lay out for you. We have done all the research and made all the arrangements. It’s going to be very different this year, so we have created detailed itineraries and they will be different from boat to boat. So please, stick to the plan and it will all work.”

Dock In Your Spot

“For every single boat in the club we have in this event, we gave the owner the option of us booking them a slip in one of five locations or getting a slip themselves. There are no gray areas—we can’t change it up. This is Key West, and dockage is at a premium. If you didn’t ask us to book a slip for you, we didn’t book one for you.

“And if we did book a slip for you, again, it’s important that you dock in your assigned area. All of the docking locations we have set up for the poker run are full. They can’t take ‘extras.’ We put a lot of planning into this and the details are critical if we want everything to go smoothly.”

Enjoy The Town And Spread The Love

“Despite the hurricane, Key West is in good shape. Most of the hotels and marinas are open. But people in the hospitality industry there are just getting back to work, and the hurricane and its aftermath took an emotional toll on them.

“Last week they had Fantasy Fest and it was down 20 percent. This week, they have the Parrot Heads in town and they don’t spend money like members of our club do, so the people of Key West are very happy the poker run and Speed Week are coming back. They need us there, spending money. Trust me, they are going to appreciate it.”

“I just had a great conversation with the people from the National Wildlife Refuge organization, which manages the sanctuary areas in the Keys. Boca Grande Key will continue to be closed throughout the weekend so please don’t assume it will be ‘back in business.’ It’s not.