After owning their boat for exactly one week, Daniel and Tara Laborde of Hammond, La., took All Laborde, their brand new M4200 luxury performance center console from Mystic Powerboats in Deland, Fla., out on their waters for the annual Tickfaw 200 Poker Run in the Louisiana Bayou. 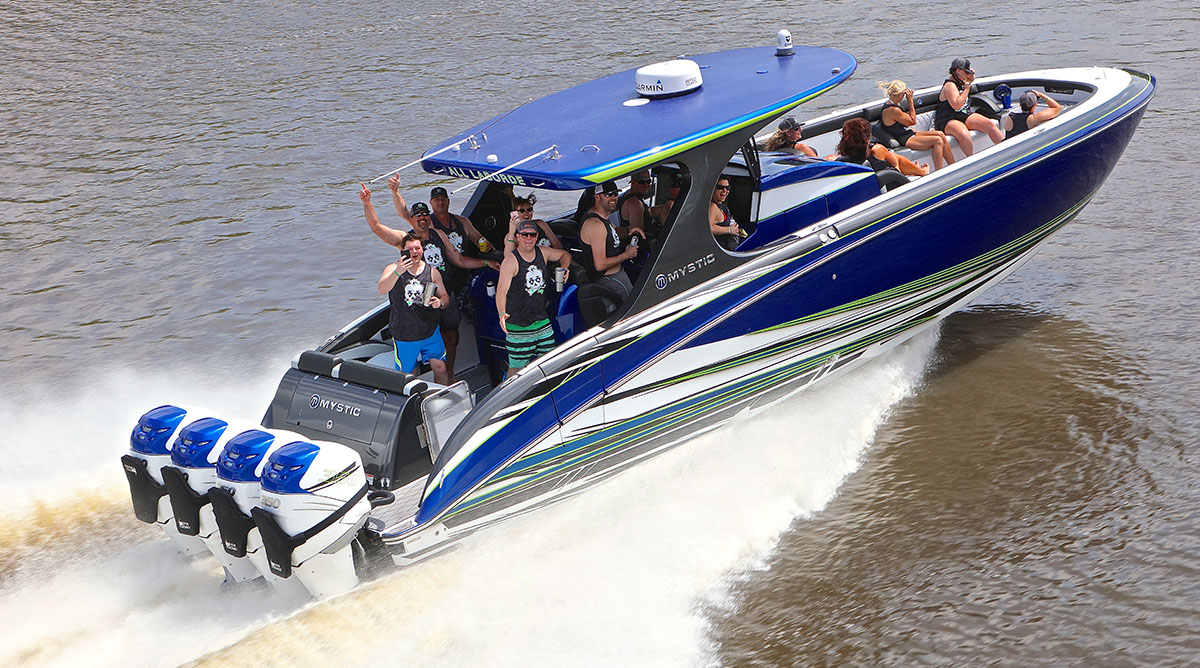 Vastly option-equipped with electronics, including radar and night vision, a stylish interior and a custom paint job from Doug Harrell Designs, the M4200 also was fully loaded with friends and family members for the multi-day event hosted by Blood River Landing in Springfield. And, as you’d expect, the All Laborde crew—decked out in matching custom Tickfaw 200 black tank tops—had an incredible time in the poker run.

“We’ve only had it a week, but I really like the comfort aspect of this boat,” said Laborde, who has owned a variety of boats over the years, including several Fountain Powerboats models, and has been looking to get into a center console the past couple of years. “I really like the fact that people have their own space, my wife has her own space and I have my own space. Because I’m most important guy.”

Laborde laughed then continued his explanation while checking out the scenery from Rum Buoys on a Friday afternoon in early May.

“I’m serious, it’s up to me to keep everyone on our boat safe,” he said. “I like to have a good time and I encourage everyone on board to have a good time, but I also let them know enough is enough. It’s all about safety first with me. That’s the main reason I ordered the boat with night vision and radar. Not only do those help for boating around here at night, they’re really for when we go to the Bahamas. For trips like that, we’re going to need the radar and maybe even the night vision. I wanted those two things and a kick-ass stereo—the rest was up to my wife.” 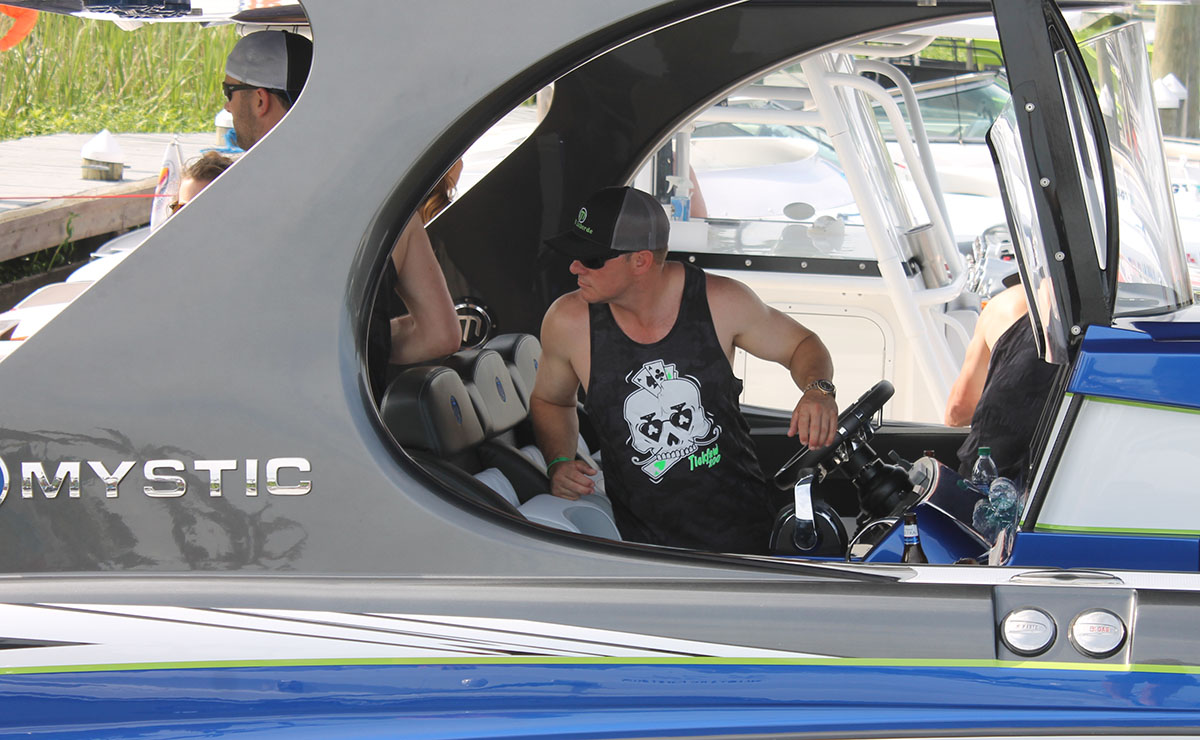 He chuckled again, admitting that Tara played a much larger role in the overall look of the boat, which is powered by quad Mercury Marine Verado 350 engines, than he did.

“Color, textures, style—she chose all of that,” Laborde said. “With everything we do, it doesn’t matter what project we have going on, she’s the person who designs everything and I just say I like that or I don’t like that. She’s good at making everything look right. And so far so good based on the feedback we’ve received about the Mystic.”

After not having much luck finding a used center console he liked, Laborde said he set his sight on a new boat and looked at several brands before deciding to go with the Mystic. 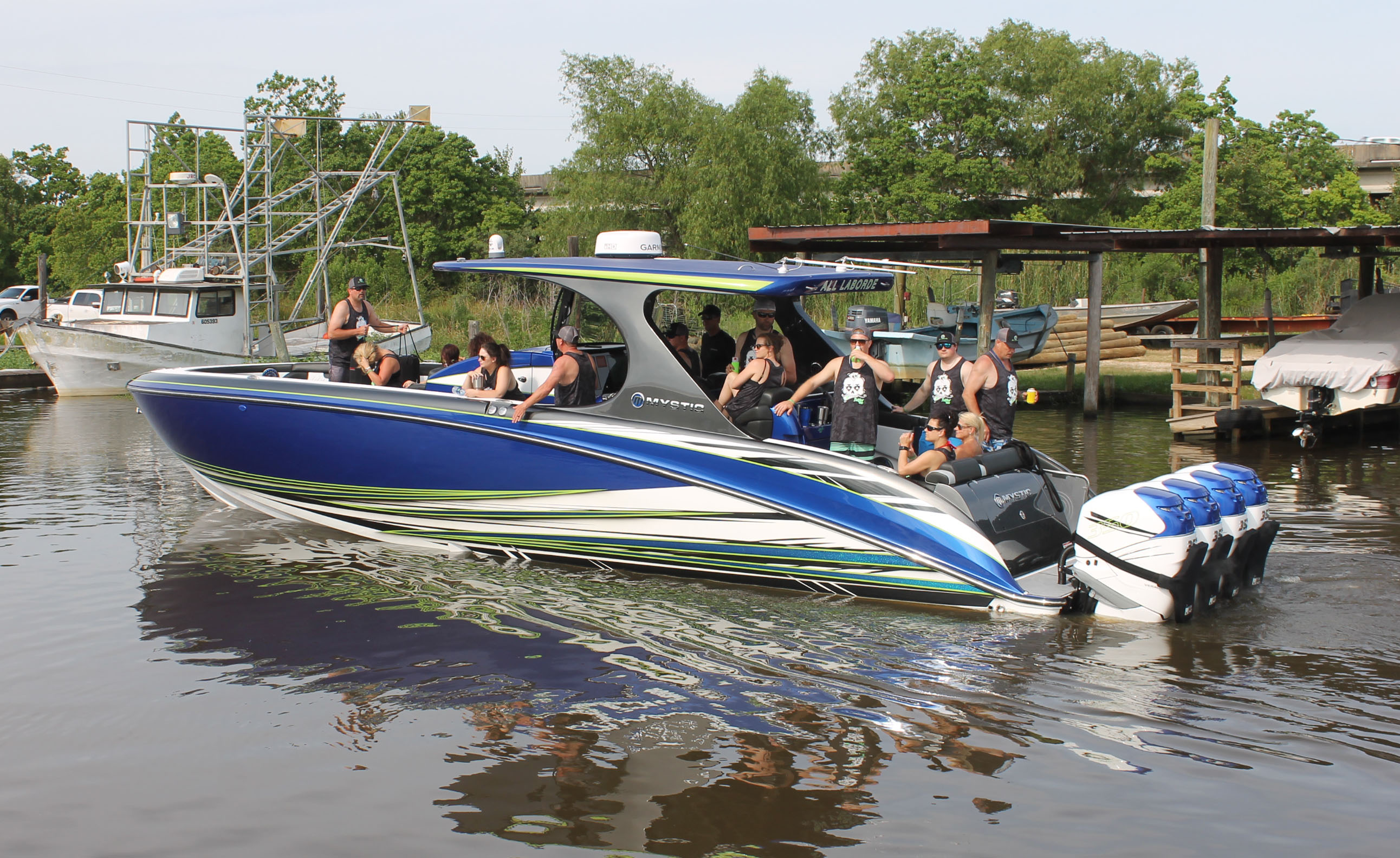 The All Laborde crew had a blast at the Tickfaw 200 Poker Run in early May.

“I’ve known Greg Weber for 10 years—I’ve bought three boats from him and have a good working relationship with him,” Laborde said. “He’s always been straight and honest with me so when I decided to take the plunge and buy a new boat, I worked out a deal on the Mystic with Greg. And I couldn’t be happier. The boat is amazing.”

Weber, who accompanied the Labordes during the event, thoroughly enjoyed his first Tickfaw 200 Poker Run experience.

“Daniel and Tara had a great time at Tickfaw—it was so fun to be part of that with them,” Weber said. “I think the boat came out great; there’s nothing super unique about it, but it’s very well optioned out. The paintjob is a one-off with a lot of influence from Tara.

“Daniel is a longtime customer of mine and has purchased several boats from me in the past,” he added. “He and Tara obviously liked the Mystic over some of the other brands they looked at, but I think our longstanding relationship helped in their decision. I look forward to seeing where their boating adventures takes them.”