A little more than three years ago, Alan Wise, a Tennessee performance boater and avid fisherman who got his hands on the Sunsation Boats company demo model 34 CCX powered by three Mercury Racing Verado 400R engines, filled me in on his plans for the 34-footer he purchased a couple of weeks after Sunsation’s Jared Morris ran it to 88 mph at the 2016 Lake of the Ozarks Shootout in Central Missouri.

He took delivery of the center console through Sunsation’s Central Missouri dealer Performance Boat Center, and was as happy as can be. In fact, you can read all about it in the column I wrote in October of that year.

From that day forward—well even before he picked up the Sunsation that he still owns—he’s had his sights set on owning an outboard-powered sport catamaran.

Not anymore. Wise took delivery of his remarkably cool new MTI 340X catamaran powered by twin Mercury Racing 450Rs the weekend before Thanksgiving and hauled it home from Lake of the Ozarks after he and his fiancé, Denise, got the full rundown courtesy of MTI owner Randy Scism with assistance from Performance Boat Center sales manager Jason Taylor.

Designed and applied in house at MTI, the 34-footer’s paintjob went well with the matte-finished Mercury Racing 450R engines.

Maybe you’ve already seen pictures. I saw a few last week and was pretty impressed by the somewhat stealth-like, kind of industrial, angular paint design with the matte black, gray and red color scheme that was handled by Wes Jones and the talented team at MTI with a significant amount of input from Wise.

“The boat is bad-ass—that’s the best way I can describe it,” Wise said. “Everything about it came together great. I love the design, the interior, the features and, of course, the ride. Randy made a point to come to the lake and ride with us and give me some pointers. I think we covered about 80 miles with him, which went pretty quick actually.

“It was a really nice experience,” he continued. “The boat runs so well and the power is amazing. The engines are very responsive. To me the 450Rs are way more spontaneous in the low to midrange than the demo boat I test drove with Verado 400R engines.”

Wise wanted the cockpit of his new 340X to have a more modern appearance than other MTIs he’s seen.

Wise said he attended the Mercury Racing 450R introduction event in Nashville in June but didn’t get a chance to ride in any of the boats with the new engines. In a way, that made the first ride in his new 340X that much more special.

“Randy and Wes and everyone else at MTI were great to work with, the same goes for the guys at Performance Boat Center—I’d definitely build another boat with them again,” Wise said. “There wasn’t anything I asked for that they couldn’t handle. I wanted my boat to look different, and I think we succeeded. A few people told me they think it’s one of the best-looking MTI builds to date. I don’t know about that, but I do know we brought some new things to the table, including wireless cell-phone chargers and a different interior look.”

Wise, who requested the pop-up FLIR thermal night vision camera MTI installed in the deck as well as the deck’s red gelcoat base so all the storage compartment tubs are red when the hatches are open. He also selected all matte-black hardware from the pin and pop-up cleats and grab handles to the STR X-Act outboard brackets and the windshield receiver. 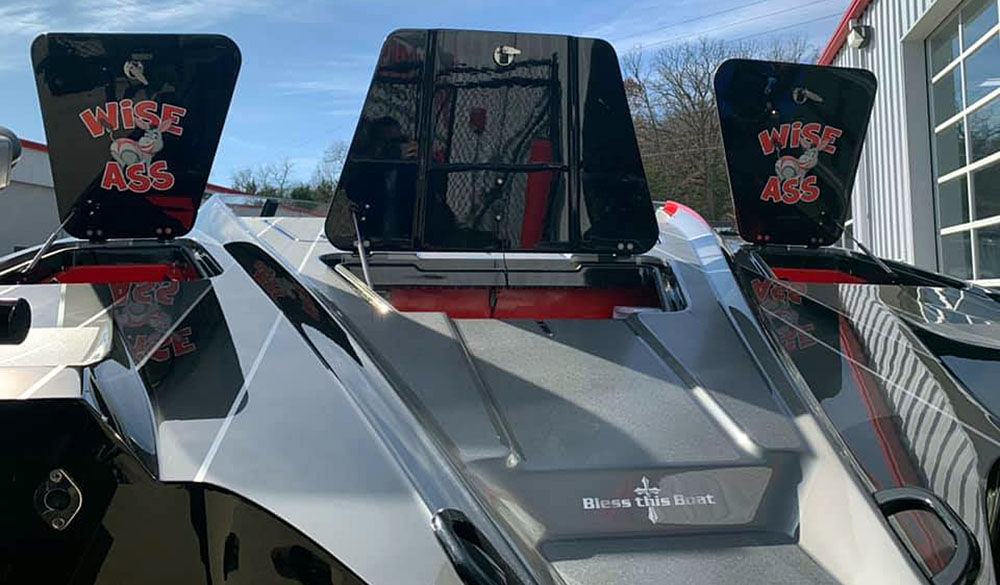 Not only was Wise impressed with the 360-degree visibility he enjoyed while driving the 340X, he also sat in the back seat while Denise drove and Scism throttled, and was impressed with the comfort and the fact that he could really hear the engines purring.

“Alan had his eye on an outboard cat so he came to us at the Miami International Boat Show and one thing led to another and he ended up ordering an MTI,” said Brett Manire, co-owner of Performance Boat Center. “He said he wanted to do one unlike anything else—something over the top—and I think he accomplished that. He worked closely with our sales guy, Jason, and the team at MTI, and they didn’t miss a thing. The boat is so sharp. I love the matte-finished 450Rs. It’s a potential trend-setter for sure.”

Wise said he plans to take the 340X, which he calls Wise Ass (he had MTI paint matching smiling donkeys on the underside of the hatches for the two outside rear storage compartments), to the spring MTI Owners Fun Run in the Florida Keys as well as to the Tickfaw 200 Poker Run in Louisiana, the Emerald Coast Poker Run in Florida, the Lake of the Ozarks Shootout and the Lake Cumberland Poker Run in Kentucky.

Assuming his schedule allows him to get to those events—and maybe more—Wise is sure to enjoy an incredible year in his new MTI 340X.