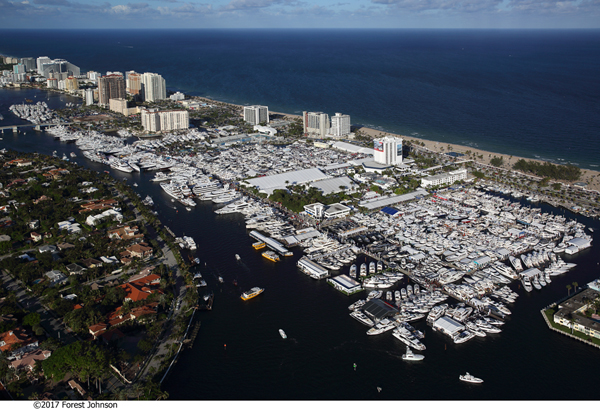 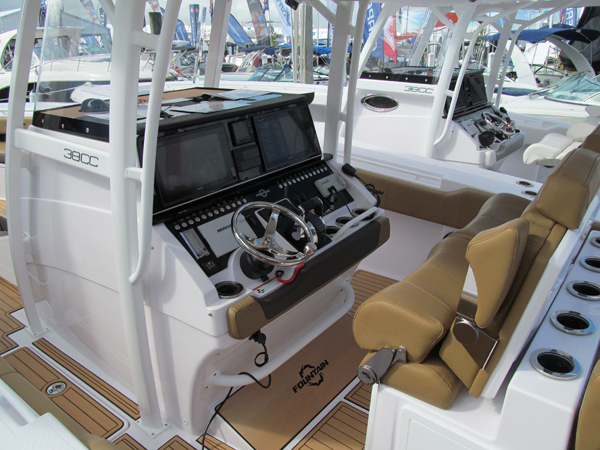 Iconic Marine Group generated lots of attention as Fountain unveiled a new look for its 34CC and 38CC models: completely refreshed above the deck, while preserving the legendary hull that provides Fountain performance and efficiency.

However, the buzz was all about the return of Reggie Fountain as a consultant to the legendary brand synonymous with his name. “It’s been exciting to have Reggie back in the mix,” says Joe Curran, COO for Iconic Marine Group. “His wealth of knowledge for the Fountain brand is endless and the expertise he adds to the engineering team has helped us get the brand back into the market.”

MTI showcased its V-42 with a quad Mercury Racing 400R outboard package that easily tops out at 80 mph. This “super”console features a full cabin with head, a selection of two hard top designs and seating modules to fit your boating lifestyle. Its latest cat — the 2018 MTI 340X boasts a full six person cockpit and wrap around windshield. The 34 footer with 10′ beam and twin Mercury Racing 400R’s generates a stable, smooth ride to the 118 mph mark. 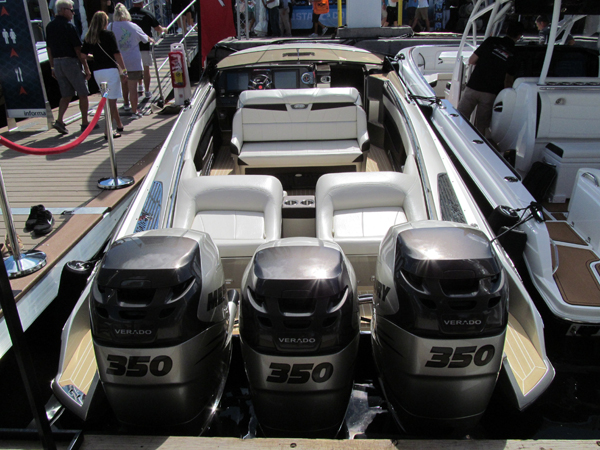 We’re all about refining what we have and building lots of options, Geoff Tomlinson explained. Photo by Offshore Public Relations.

Nor Tech’s redesigned 360 American Flyer (a redressed version of the MC Flyer) combines elegant retro styling of the classic runabouts. The stunning 36′ vee hull was displayed with triple Mercury Verado 350 hp engines and dressed in subtle mocca fades. The 360 sports full Bimini top, cabin with full head, ample seating, zero controls and hits the high 80 mph notch. As Dealer Manager, Geoff Tomlinson explained, “We’re re-introducing it and getting it back in the market. We put one of these on our Facebook page and in less than an hour, we had it sold.”

Statement featured a striking red/gray/white 35′ hull and twin 350 hp Verado’s for 60+ mph run, while its 38 footer with a blend of cobalt blue/gray/green/black fades sported triple Mercury Racing 400R’s delivering 80+ mph speeds. Each model boasts a can’t-miss “Statement” emblazoned along its side and as Craig Barrie stated, “The biggest form of advertising is on the water.”

Mercury and Mercury Racing continue to generate a powerful punch to the market via impressive Verado 350 hp and Mercury Racing 400R packages that outfitted a majority of displayed boats, offering enthusiasts a choice of twin, triple or quad applications and a wide color selection.

The new Platinum Series Throttles from Livorsi Marine feature a design that’s ergonomically comfortable to the operator, while lighter and more compact for fitting into tight spaces. Three throttle/shift configurations are available: fully mechanical, fully electric and mechanical/electric (hybrid). Choose from flat or the new contour base in an array of colors, chrome or carbon fiber.

Garmin introduced ActiveCaptain, an all-in-one mobile app, for boaters. It provides a seamless content management system for enhanced connectivity, community and planning functionality. It’s available as a free download from either the App Store or Google Play and is compatible with a range of Garmin chart plotters and MFDs.