Chris Mills, the talented, humble, low-key owner of Boat Customs, in Caledonia, Mich., seemed rather relaxed during a conversation earlier this week. That was a welcome change being that the respected designer and painter had been running fairly ragged the last couple of years with a revolving door of extensive, seemingly never-ending projects. 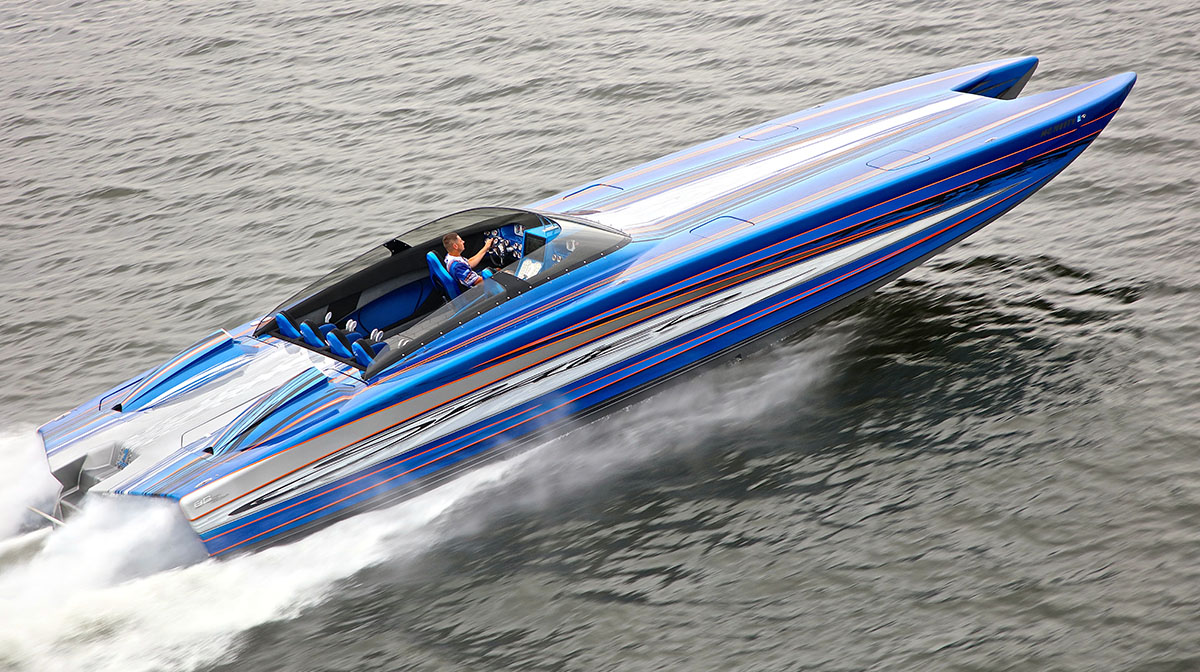 Dan and Lisa Sherman’s 46-foot Skater Powerboats catamaran made quite a showing at Super Cat Fest and the Lake of the Ozarks Shootout in Central Missouri. Photo by Pete Boden/Shoot 2 Thrill Pix

But thanks to wrapping up several boats throughout the summer, including a few one-of-a-kind Skater Powerboats catamarans and a radical Fountain/Skater V-bottom conversion, and taking a hard look at the company’s overall business philosophy, the stress level appears to have dropped around Boat Customs’ 12,000-square-foot facility.

“We’ve been working our hearts out, often putting in 100-hour work weeks, which is no fun at all,” Mills explained. “We realized though that the rigging and other things that weren’t our specialty were more of a distraction and a time-suck so we’re pulling back some to focus on what we do best—making boats look incredible.”

Mills added that the company’s concentration is going to be on paint, glass work and wraparound windshield conversions, a skill set his team has perfected by working closely with Lee Aerospace, which supplies windshield for Skaters and other boat brands.

For some that news may come as a disappointment, especially for those folks who were enamored with 1 More, Dan and Lisa Sherman’s 46-foot Skater that was on display over the summer at the Boyne Thunder Poker Run in Michigan and the Lake of the Ozarks Shootout and Super Cat Fest in Missouri. Powered by 1,000-plus-hp Sterling Performance Engines, the custom 46-footer, which was originally built with turbine engines and quarter-canopy-style windscreens and took the better part of two years to complete, was loaded with in-house constructed components from the billet dash panels and controls to retooled engine scoops and rear seats. 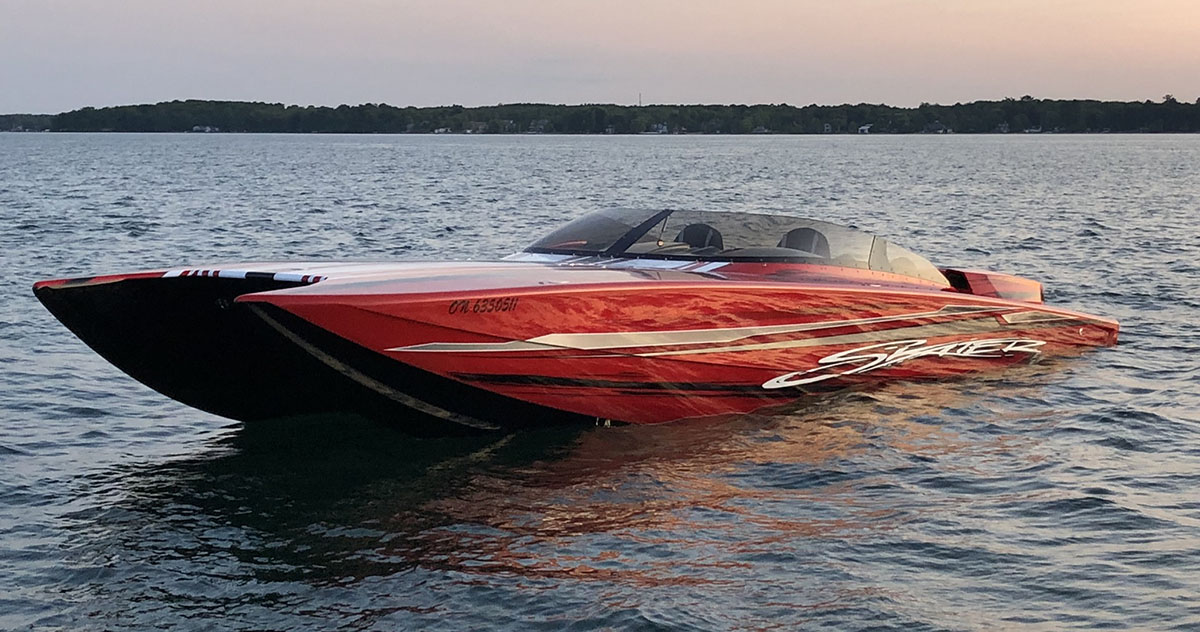 Clay Leibel’s 338 is one of the prettiest Skater catamarans to ever hit the water. Photo courtesy Clay Leibel

“I guess you could say we got a little out of control with some things,” Mills said, then laughed. “It’s a beautiful boat though, and there’s nothing else quite like it.”

The Shermans’ project was about as close as it comes to building a new boat—and good luck arguing that it doesn’t look like it could be a new Skater. Considering the substantial changes made to the 46-footer, not to mention the man-hours it took to accomplish them, the cat is arguably Boat Customs’ most impressive effort to date.

Dan Sherman, who also owns a 42-foot Mystic Powerboats center console, a 42-foot Fountain V-bottom, a 31-foot twin-outboard pontoon and a 36-foot Skater with partner Scott Stinebring, admitted it was difficult to remain interested in the project considering the boat was dormant for close to four years. Still, he said he’s glad he waited it out.

“I love the boat—I’m very pleased with how everything turned out,” Sherman said. “From Chris’ paintwork and his custom touches like the billet handles for the rear seats that match the throttles to the interior that Craig (Ellis) and his team at Appearance Products nailed, the boat is a knockout. We only had it on display at Boyne, but I got to run it a little before Lake of the Ozarks and it’s awesome. I didn’t get a lot of time in it as we had some debugging to do, but I took it out with friends and family and ran it up over 100 mph and it’s a nice ride.

“I left the boat with Performance Boat Center at Lake of the Ozarks after the Shootout,” he continued. “Myrick (Coil) and the experienced team over there are going to dial it in for me over the winter and make sure it’s perfect. That part isn’t Boat Customs’ specialty, and if you don’t have the tools and the parts that you need to really test and dial in a boat, you can spend another five or six figures in testing alone. I’m not looking for a big top speed—that’s not my style—but don’t get me wrong, I’ll let Myrick run it for a big number in 1,400-hp mode on 110-octane fuel to see what it’s got. For me though, I want to be able to cruise at a respectable speed where everyone in the boat feels comfortable.”

Also during the 2019 season, Boat Customs delivered the gorgeous new Tilt, a 40-foot Skater owned by Michigan’s Ed Tirakian, and turned Canadian Clay Leibel’s previously all-white Skater 338 into a work of art, complete with a custom dash, distinct engine scoops, a new windshield, bustle modifications and seat backs painted to match the stunning 33-footer. The company’s most recent delivery was made to New Jersey’s Ray Contreras, the former offshore racer who opted to convert his canopied Skater 388, which he raced competitively for more than a decade, into a pleasure boat with a wraparound windshield.

“I think Ray’s boat came out great,” Mills said. “Appearance Products did an amazing job with the interior and I like the modernized look and feel of the boat with the newer Garmin technology and engine monitoring systems. It’s an interesting combination with the Supercat racing engines in a pleasure boat, too.”

Double Take, a popular 46-foot Skater, is getting a wraparound windshield and more thanks to Boat Customs. Photo by Pete Boden

No surprise, Mills said he has a couple of Skaters in the shop currently, including the well-known 46-footer Double Take, which is getting a new wraparound windshield and some minor touchups done to it per its new owners, John and JP Frohlich. He also said he’s been in talks with a couple of manufacturers recently about painting some of their new boats.

With a simplified outlook on the business, Mills is looking forward to spending more time in his happy place—the paint booth.