You are at:Home»Awesome Boats»Carbon-Fiber 40-Foot MTI Wows Its New Owner

When David Spear and Billy Moore showed up to the Texas Outlaw Challenge at the end of June in Spear’s recently acquired 40-foot catamaran from Marine Technology Inc., in Wentzville, Mo., there weren’t too many people who knew they were coming, let alone that they were going to run a pristine closed-canopy MTI powered by twin Mercury Racing 1350 engines in both the poker run and the top-speed shootout.

That’s mainly because the boat, which was introduced at the Miami International Boat Show in 2012, had been out of the limelight and seldom used by its former owner on South Carolina’s Lake Hartwell. Spear, who also owns The Sleeper, a stunning Outerlimits Offshore Powerboats SL 44 V-bottom with twin 1,350-hp Chief Performance/Precision Power Offshore engines, purchased the catamaran about week before the Texas Outlaw Challenge with assistance from Moore, who handled the boat—including overseeing the build of the lightweight all-carbon boat in 2011—for its original owner.

According to Moore, the 40-footer only had 30 hours on it before he and Spear took it to Clear Lake and ran it up to 150 mph in the Texas Outlaw Challenge National Shootout Championship to win their class and finish third overall. (You can watch a 15-minute YouTube video from the cockpit of their last four runs in Texas.) 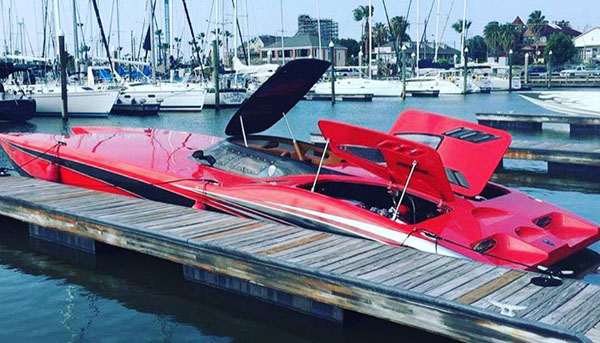 With significant resemblance to a Ferrari, the all-carbon MTI powered by twin Mercury Racing 1350 engines was a hit at the docks. Photo courtesy Texas Outlaw Challenge

“We did it all in Texas and had a great time,” said Spear, who enjoyed the entire event, including the street parties, the party at Kenny Armstrong’s following the shootout on Friday and the poker run the next day, with his wife, Lisa. “Although the conditions were windy and prevented us from using the larger props we tried first, we propped down to get more control and ended up running 150 mph, which wasn’t bad for our first shootout. We were able to get a great feel for the boat—it’s an incredible machine.

“Having Billy by my side was especially helpful since he’s so familiar with the boat and has an amazingly calm and knowledgeable way of talking to you and teaching you what to do,” he continued. “I tried to take everything he told me in like a sponge. He really knows what he’s doing in a boat.”

Moore, an accomplished offshore racing throttleman and setup specialist, said he had a great time in Texas and is looking forward to running the Distant Thunder MTI again with Spear.

“It was nice to get out there and show off the boat,” said Moore, whose father Bobby is a legendary offshore racing throttleman. “It’s really a special piece since it’s a full carbon edition boat with a specially built lid to keep the driver and passengers out of the sun and in the air conditioning. It’s such a fun boat to blast around in—the acceleration is incredible. It’s kind of like being in a shifter cart.”

Moore said driving the MTI, which tops out above 170 mph and has a Ferrari-like appearance, was interesting along the new three-quarter-mile shootout course.

“That was my first shootout,” Moore said. “It was interesting because there is definitely strategy involved in getting the most out of your boat in that short of a distance. We made several passes toward the end because we were having so much fun and so were the spectators. The main thing for me was that David had a good time. Based on that, I think the first outing in the boat was a success.” 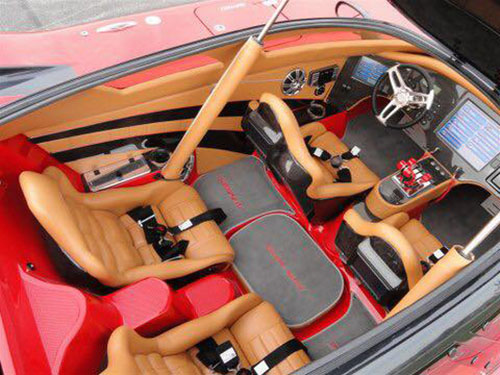 A look inside the plush cockpit of the 40-foot MTI Distant Thunder. Photo courtesy David Spear

Spear, who owns a home in Houston but lives in the Middle East with his wife most of the year thanks to his job as a senior advisor for a major U.S. oil company, is looking forward to returning to the States to run the MTI, which he said took some getting used to because out all of the boats he’s owned throughout this life, he’s never driven one that protects him from both the sun and the wind.

“We should be back sometime in September and we’re looking forward to running our boats,” said Spear, who also owns a sport fishing boat and has owned everything from cruisers and wooden boats to ski boats and performance boats from the likes of Cigarette Racing Team. “I feel so lucky to have found the MTI, especially since it’s been a freshwater boat. It’s immaculate—it looks like it just came out of the boat show.”

And while he hasn’t owned the boat too long, Spear is already talking about swapping out the Mercury Racing 1350 engines with a pair of the company’s 1550/1350 dual fuel motors or the race-inspired 1650 engines for top-speed shootouts next year.

“I believe the boat could handle the power,” Moore said. “Now would you want to put 1650s in it and use for pleasure boating? No. But swapping the engines out to go run some shootouts would be incredible.

“First though, we need to get David some more experience in the boat,” he continued. “He’s been a boater his whole life so he knows how to handle things. Before he bought the boat I told him, ‘You’re buying the boat from one of my customers, but I’m not going to sell it, hand you the keys and tell you to go have a good time.’ I want to make sure he knows the boat inside and out, is comfortable with it and understands that it’s a powerful machine. The good thing is, David is eager to learn how to run the boat.”

And everyone else is eager to see Spear’s “new” boat at an event near them.