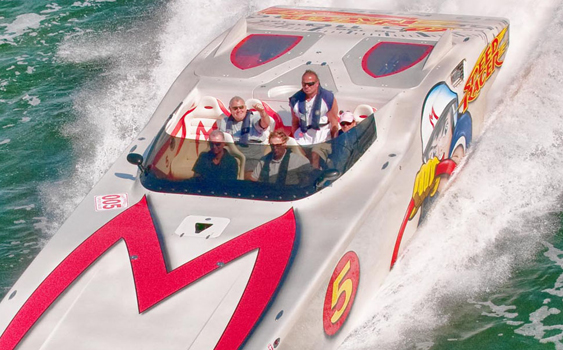 Recently sold, Christie’s Speed Racer was one of the most popular boats on the poker run circuit.

At least three people—Frank Civitano, Joe Nasso and me—were particularly bummed when Bob Christie told us he was selling his prized Speed Racer 44-foot Marine Technology, Inc., catamaran last year. Of course, our collective sorrow was completely self-serving because Christie has let each of us drive the cat in poker runs while he throttled. As a friend of mine once said, without self-interest there is no interest.

But Christie, who has homes in New Jersey and Florida, was burned out on the hassle of flat-trailering a wide load cat and had no interest in taking on the expense of a new tilt trailer and the rig required to pull it. That’s a major conundrum for a guy with a wide-load cat, especially one who “doesn’t like to boat in the same place all the time.” And that wasn’t all.

“At poker runs with Speed, we usually had more people who wanted to go in the boat than we could fit in the boat,” said Christie.

So amidst the anguished cries of all of us who know and love Bob Christie—and, OK, driving Speed Racer—he put the 44-footer up for sale and ordered the first quad-engine outboard center console ever built by Statement Marine. The 36-footer was delivered to Christie at the 2013 Miami International Boat Show in February and he took it on the Florida Powerboat Club’s Miami Boat Show Poker Run the following weekend. 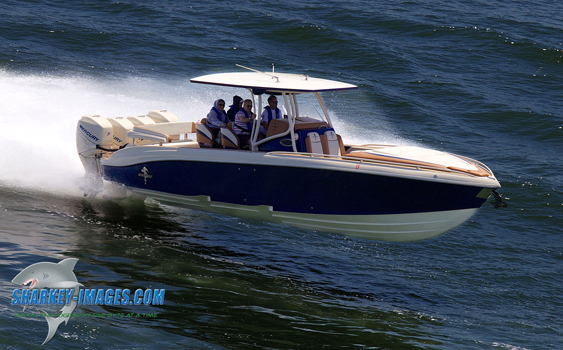 Christie on his center console: “The Statement is absolutely fabulous—we’ve done five poker runs in it already.”

And so Bob Christie, his wife Madelyn, their three daughters and all his friends—even the pouty ones who no longer have Speed Racer to drive—will live happily ever after, right? Well, yes, or at least sort of.

“The Statement is absolutely fabulous—we’ve done five poker runs in it already,” Christie explained. “We have two sets of bolsters in the cockpit so four people have bolsters, the rear bench and seating up front. Those seats can get a little windy. But we have all the space we need. It’s the kind of boat my wife said she would like to have for our grandkids and going out to dinner. We all love it.”

When asked that question, he laughed.

“I’m bored at 75 mph,” he said. “There’s definitely a ‘wow factor’ in having four engines—they have lots of torque and will pin you back in your seat—and I went with quad 300s rather than triple 350s because the 300s run on regular fuel, but I want to go faster. You should see my wife make fun of me when I drive, trying to make it go faster. I am starting to think about retiring, and I don’t want two boats. My wife said, ‘My boat is the beach house. If you want a fast boat, sell that one and go get a fast boat.’”

These are good problems to have, of course. No one knows that better than Christie, an entirely self-made success who works as hard as anyone I’ve ever met. And he is as happy with the Statement center console in terms of its build quality, features and performance for its intended purpose as he has been with any other boat he’s owned. He just wants to go faster—a cause that those of us who get to drive his boats can certainly get behind.

“I don’t know what I’m going to do at this point,” said Christie. “But I’m definitely thinking V-hull because it’s something I can tow easily. If I were going cat, I’d go back to an MTI in a heartbeat. But I’m thinking V-bottom.”

As are a select few of his friends. But they’ll take what they can get.