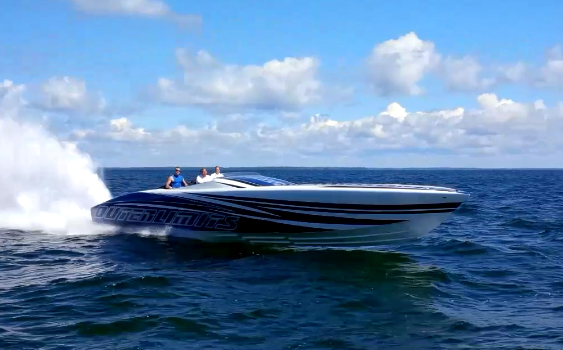 Here is a simple truth about high-performance powerboat owners: They are never completely “satisfied” with what they have tied up at the docks. That’s not to say they don’t love and appreciate their current rides. But given the means and the opportunity to upgrade, most wouldn’t hesitate.

Dave Scotto of Ontario, Canada, is a perfect example. Since he was 17 years old, he has owned a series of boats—from a 19-foot Panther ski-boat with a 250-hp outboard engine to his current beauty, an Outerlimits Super Leggera 52 V-bottom with twin Mercury 1650 Race engines. And he’s loved every one of them. Of course, he loves his new 52-footer, the first and only V-bottom to date to be equipped with 1650s, most of all.

“When I buy something, I want to buy the best,” said Scotto. “I feel that Outerlimits builds the best boat in the world.”

Lest you think the 46-year-old is some spoiled silver-spoon reject from “Lifestyles of the Rich and Famous”—and one who has always owned new go-fast boats—think again. A self-made entrepreneur who created a nail (the kind you hammer) importing business, Scotto stair-stepped his way up to his current 52-footer. He started with a used 32-foot Hustler that he gutted and repowered. In the process of restoring the Hustler he met Mike Fiore, who was still working at Hustler Powerboats with his father, Paul, who founded the company. He eventually sold the 32-footer and bought a used 38-foot Scarab, which  he also sold.

In 2009, Scotto was ready to buy his first brand-new go-fast boat. And he wasn’t messing around.

“I kept in touch with Mike,” said Scotto. “I said to him, ‘One day I will own one of your boats.’ I ran my business hard for the next ten years and made some money. When I was ready, I called Mike at Hustler, but they told me he didn’t work there anymore. So I got his number at Outerlimits at his first place in Bristol [R.I.] and I said, ‘Mike, I am ready to build a brand-new boat.’ I don’t think he believed me. The next moment I was on the road. I jumped in my truck and drove down there.”

Scotto and Fiore met for six hours. By the time Scotto headed back to Canada, he had ordered a Super Leggera 44 V-bottom powered by twin Mercury Racing 1075 SCi engines. He ran the boat hard for three years and fell in love with it.

But love is a funny and fickle thing when it comes to go-fast boat owners. In the fall of 2012, Scotto decided he wanted to go bigger and ordered his SL 52. 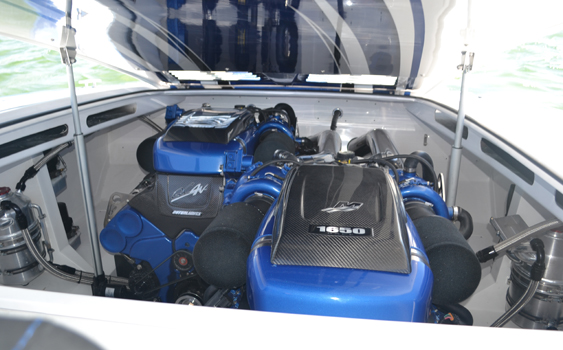 From the moment he saw them at the 2013 Miami International Boat Show, Scotto was Mercury Racing 1650 Race engines to power his new boat.

“I initially ordered it with [Mercury Racing] 1350, but then I went to the [2013] Miami Boat Show with Mike,” said Scotto. “The guy at Mercury pulled the sheet off the 1650 and I said to Mike, ‘I want them.’ He said, ‘What are you talking about? Those are race engines. You don’t want them. You can’t even get them.’ So I left the boat show and went away on vacation.

“Mike was building my boat and sending me pictures while I was away—I’m the kind of guy who wants a pictures of his boat being built every day,” he continued. “I was sitting at the bar having a piña colada with a friend and I get a text from Mike. It says, ‘Dave, do you really want 1650s?’ I literally fell off my chair. I sent him one back, ‘Phone me now!’ Within two minutes my phone rings. He said, ‘Were you serious about wanting 1650s in your boat? I’m not joking.’ I said, ‘Yes, I’m serious.’” 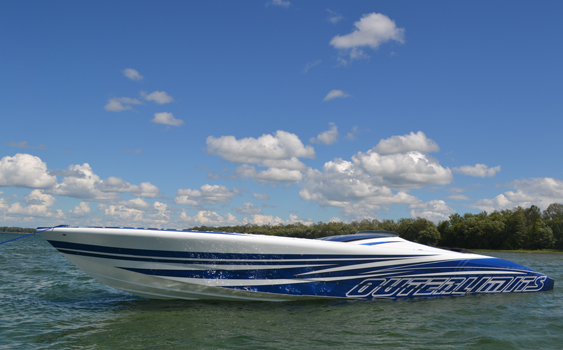 Scotto: “I feel that Outerlimits builds the best boat in the world.”

And that’s why in late July Scotto found himself in the cockpit of his new 1650-powered 52-footer—officially dubbed the SL 52 R—with Fiore at the helm for its first sea trial. Scotto was blown away.

“I have been in a 40-foot cat with 1350s, and there is no comparison,” said Scotto. “When Mike hammered it, it actually forced me into the back seat. There are no words to explain it, but the torque, for me, is the biggest thing ever. The acceleration is phenomenal. And it’s a big boat. A 52-foot boat doing 150 mph is pretty amazing. That’s why I say Mike builds the best V-bottom in the world.” 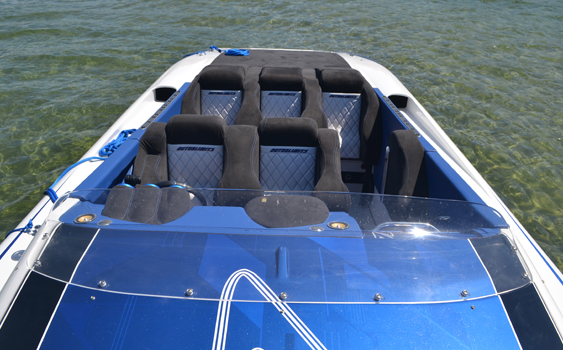 The SL 52 R is the second Outerlimits Scotto has owned.

Next up for Scotto is this coming weekend’s Lake of the Ozarks Shootout in Missouri. While Scotto will run his boat around the lake with friends during the event, Fiore will pilot it during the 52-footer in the top-speed competition. For the moment, at least, Scotto is satisfied, make the delighted, with his current ride.

“I’ll have this boat until Mike makes a bigger, faster one,” said Scotto.