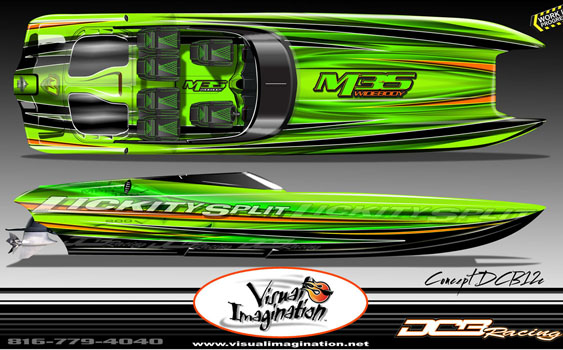 Although this rendering is a work in progress, Visual Imagination will start applying the first paint job to a new M35 Widebody from DCB Performance Boats next week.

Thanks to a new M35 Widebody ordered by Lake Havasu City, Ariz., customer JP O’Donoghue, DCB Performance Boats now has a new option for future owners—paint. Yes, the El Cajon, Calif., company that is known for impeccable gelcoat graphics is turning one of its 35-foot catamarans over to Visual Imagination in Peculiar, Mo., for a one-of-a-kind paint job.

According to DCB founder Dave Hemmingson, the M35, which will be powered by twin Mercury Racing 1350 engines, is being shipped to Missouri next week where it will receive its custom paint job from Mark Morris and company at Visual Imagination. Morris, who is excited to put his stamp on the M35, expects the paint job to take six weeks to complete. After that, the boat will return to DCB for rigging, interior installation and more before making its debut at the Desert Storm Poker Run in April.

“I’m excited about this boat because I think we’re going to get a great three-dimensional look to it thanks to Mark Morris,” Hemmingson said. “I’ve bonded with Mark and he’s a great guy. Actually we’re looking forward to doing some more boats in the future with him. We’re not going to stop doing gelcoat, but we’ll do some crazy painted boats here and there, and Mark is going to be our guy.

“Really it’s just another option,” he continued. “If someone wants that 3D shadowing effect or the real candy colors, paint is hard to beat. If you want gelcoat, we’re as good as it gets in that department. It really depends on the customer’s needs.”

With a white-and-black gelcoat base, DCB’s M35 is nearly ready for its custom paint job.

The customer in this case fell in love with DCB’s boats at the 2014 Los Angeles Boat Show and ordered an M35 a few weeks later after visiting with Hemmingson at the DCB shop. The catch was that he wanted the boat, which he’s named Lickity Split, to stand out with an unprecedented paint job rather than the company’s tried-and-true gelcoat graphics. So Hemmingson went in search of a painter and was thoroughly impressed by Morris and the Visual Imagination crew.

O’Donoghue’s good friend, Brad Kloepfer, who is handling most of the build process approvals and plans to drive the 35-footer with O’Donoghue, has been impressed by Morris as well. To complement the soon-to-be-applied green, orange and black paint job, Kloepfer said the boat is going to be fully loaded with only the top-of-the-line accessories offered by DCB. 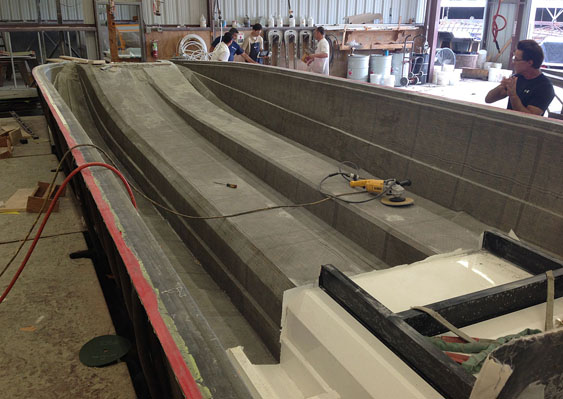 Owner JP O’Donoghue has been able to watch the build of Lickity Split from the early stages of construction.

He also said the boat will be towed by a matching SportChassis P4XL luxury sport utility vehicle and that he’s currently putting together Lickity Split apparel as well as a website to promote the 35-footer and the various poker runs he and O’Donoghue plan to attend next year.

“Both JP and Brad are really good guys—we’re fortunate to have them as part of the DCB family,” Hemmingson said. “We’re looking forward to hanging out with them and doing some events, starting with the Desert Storm Poker Run. The boat is going to have every option you can think of. It’s a super fun project—it really is. I can’t wait to see how it comes out and how much attention it gets.”

To follow the new M35 as it gets painted, rigged and water-tested, be sure to look for updates on speedonthewater.com.