MTI models of all shapes and sizes are currently being taken care of by the MTI staff at the company’s new sales and service center at Haulover Marine Center in North Miami. Photo courtesy of Tim Gallagher

I’m sensing a little bit of a theme here, as I am once again writing about the eventful  times at Marine Technology Inc., aka MTI, the Wentzville, Mo.-based catamaran and center console builder. Following a June 2017 column (read it here) and another similar one in early January (read it here), the pace hasn’t let up at all this year as the company continues to build and deliver its popular MTI-V 42 center consoles, plus two super-sized 57-footers, alongside catamarans from 34 feet to 52 feet.

Following the all-encompassing Fort Lauderdale International Boat Show in South Florida last week, in which MTI announced its new sales, service and storage center at Haulover Marine Center in North Miami, the company jumped right into “Key West” mode as many of its customers from around the country are in town this week for the Florida Powerboat Club Key West Poker Run and Super Boat International Key West Offshore World Championships.

Not only did MTI just deliver a couple of new boats that were on display at the Fort Lauderdale show—a sporty 340X catamaran powered by twin Mercury Racing Verado 400R engines to Pennsylvania’s Ron Schwartz and an attention-getting four-Verado 400R-powered MTI-V 57 luxury performance center console, a sport fishing-specific model for South Carolina’s Richard Bennett—the company took several orders at the show and even sold its demo model MTI-V 42 center console.

“We had a fantastic Lauderdale show—we made a few deals and have a bunch of demo rides lined up after we get back from Key West,” said Tim Gallagher, MTI’s sales and marketing manager. “We’re continuing to push forward with deliveries and getting the sales and service center up and running. This week is a crazy one for us.” 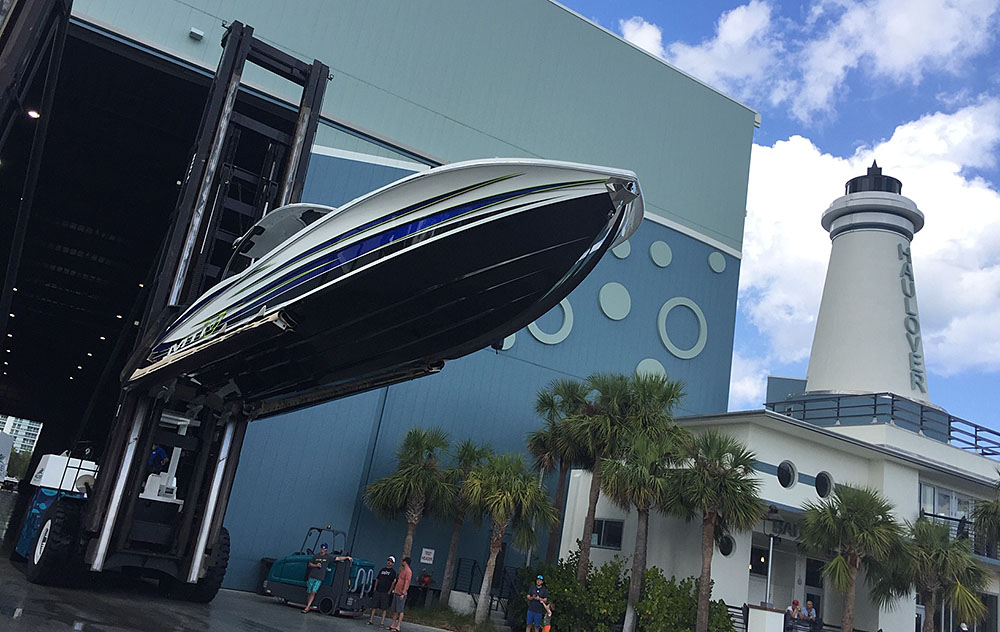 The team at Haulover Marine Center prepares to put an MTI-V 42 into the water for this week’s Key West Poker Run. Photo courtesy of Tim Gallagher

With more than 20 boats currently in the facility, Gallagher said the MTI service center , which is managed by Milton Calafell, is pretty full at the moment—that’s not surprising considering how many customers are in town for the poker run.

Along with the dozens of MTI owners registered for the poker run that heads from Miami to Key West today and tomorrow, one international customer is taking delivery of his new MTI—a 43-foot catamaran powered by twin Teague Custom Marine 1200-hp engines—tomorrow just in time for the poker run.

Gallagher, who mentioned that MTI has a lunch run planned for Saturday, said he’s excited about the future of the company’s new South Florida full-service sales, storage and service center.

“Our guys have access to Haulover 24/7, which allows us to give our customers the level of service they’ve come to expect,” said Gallagher, who said MTI has a section of the north rear corner of the facility to handle service, detailing, you name it. “We call it the ‘white-glove’ service. MTI owners can drop off their boat and we’ll properly clean it, store it, maintain it and more so the boat is ready for its next day on the water.”

The more stress-free he can make the customer experience, the better, Gallagher said, adding that MTI has some more “customer experience” events in store for 2019. Sounds like the topic for another “MTI Madness” column in the future.