You are at:Home»Awesome Boats»In Simple Praise Of Plain White Boats

Heading to Key West, Fla., today to cover the Super Boat International Offshore World Championships and the Florida Powerboat Club’s signature poker run as I have more times than I can remember, I know I soon will be surrounded by a sea of color. And I’m not just talking about the fascinating and often quirky locals and tourists in the city at the end of the road. I’m talking about the high-performance powerboats that will be found at various docks in Key West Harbor for much of the week.

Let’s be honest: Most high-performance powerboat owners aren’t shy when it comes to coloring their rides. That doesn’t mean the work of go-fast boat graphics hotshots such as Dean Loucks of The Art Of Design, Mark Morris of Visual Imagination, Stephen Miles of Stephen Miles Design and Chris Mills of Boat Customs is anything less than stellar. But it’s fair to say that their clients are more likely to go over-the-top than understated when it comes to color.

For the record, I like over the top. I just don’t like it all the time. And now and then, a simple white boat can be simply spectacular. That they tend to be few and far between in the high-performance world makes them that much more compelling.

Also for the record, white is a brutally revealing color—or absence of color as some define it—for a boat. White reveals every tooling imperfection and showcases every ill-conceived line. For the builder and the buyer, it takes guts to go with a white boat.

But then, take a look and Mike and Kathie Stevenson’s DCB Performance Boats predominantly white M44 catamaran, which was the El Cajon, Calif., company’s second 44-footer built when it was completed a little more than a year ago. Yes, it’s elegant. But it also has attitude—loads of it, in fact. 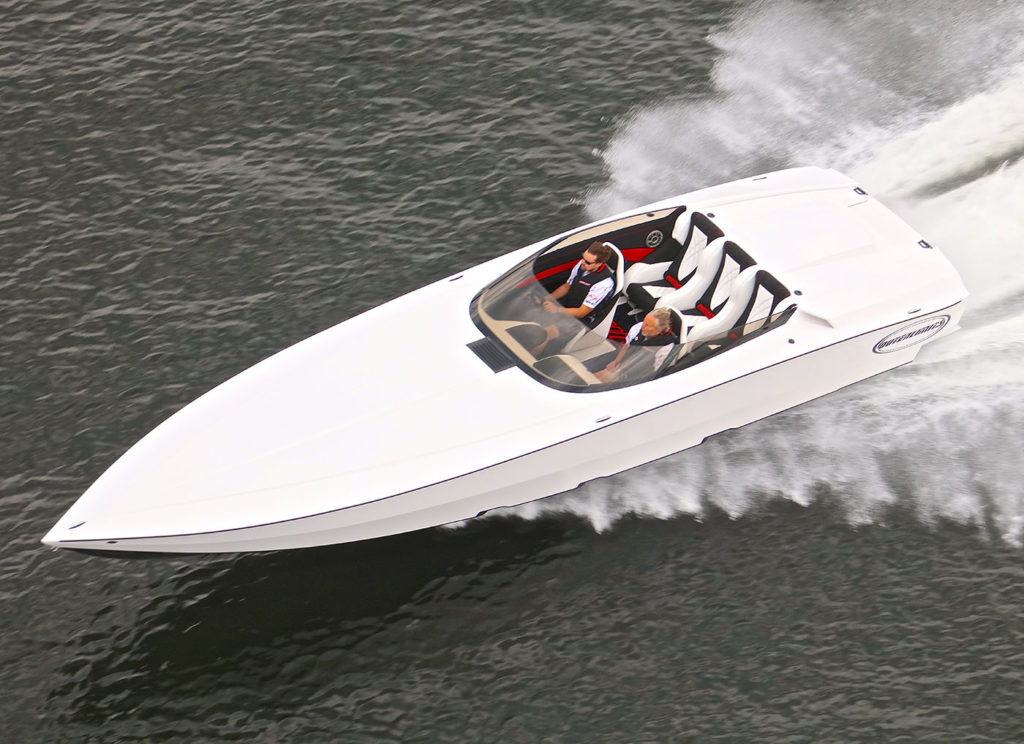 Of course, the world would be tedious and dull if all go-fast boats were white. My longtime friend John Caparell, who owns a tastefully colorful, downright sexy 32-foot Doug Wright catamaran, is well known in the high-performance powerboating community and pretty much hates white boats, contends that owners express their personalities through the graphics on their boats. I agree with him.

But Slug Hefner, another longtime friend and well-known member of the go-fast powerboating, has not one but two—a Mystic C5000 catamaran and a Mystic C3800 catamaran—predominantly white boats. And yet no one in his or her right mind would describe Hefner as anything less than colorful.

In painting, canvas is a medium for expression. Vertical or horizontal, canvases are blank slates until an artist applies colors to them.

But in boat painting, the vessel is the canvas and it’s anything but a blank slate thanks to its hull and deck lines and other styling cues. The finest custom high-performance are works of art, albeit unfinished, before the first mist of paint is air-brushed onto them.

So here’s to white high-performance boats. No doubt, too many of them would make the go-fast V-bottom, catamaran and center console world a dreary and—by definition—colorless place. But now and then, they can be pure knockouts.