A few months back, Kelly Flory, a longtime public relations associate dating back to my days of putting together the Accessories section of Powerboat magazine in which many of the Martin Flory Group clients’ products were featured each month, informed me that MFG was now working with Jaguar Powerboats. She also explained that the High Point-N.C.-based company, which was founded by decorated offshore racer Jack Clarke and is now run by his son, John, was planning to debut its first 43-foot center console-style catamaran at the 2020 Miami International Boat Show, which takes place next week at Miami Marine Stadium on Virginia Key. 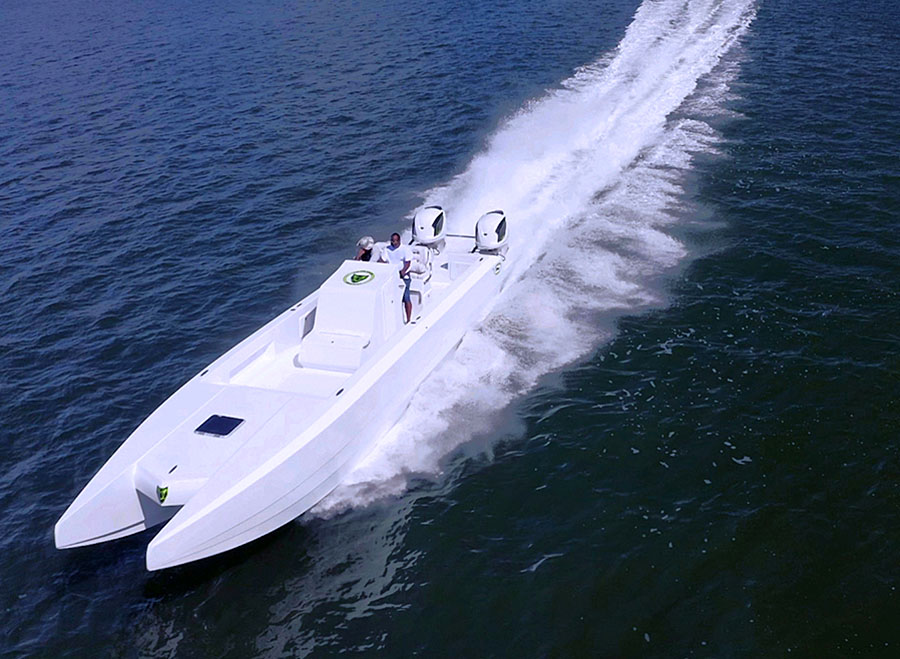 A recent press release sent from Flory opened with a question about whether a 43-foot center console cat with a pair of Seven Marine 627SV outboard engines capable of topping 100 mph could be classified as a family day boat or a hardcore fishing platform, and the answer, which appears to be yes to both, is sure to be proven at the Miami show as well as in the coming months.

According to the release, the new J43 model from the custom boatbuilder draws upon a robust racing heritage while delivering a safe, stable and fuel-efficient ride at any speed. All I know is that I can’t wait to see hull No. 1 at next week’s Miami International Boat Show, where it will be on display and available for demo rides at dock 327.

“Our goal wasn’t to build a full-on raceboat,” said John Clarke, president of Jaguar Powerboats. “While some customers will no doubt take advantage of the J43’s unprecedented speed, it is, first and foremost, a safe boat that slices through rough seas and carves through turns like it’s on rails.” 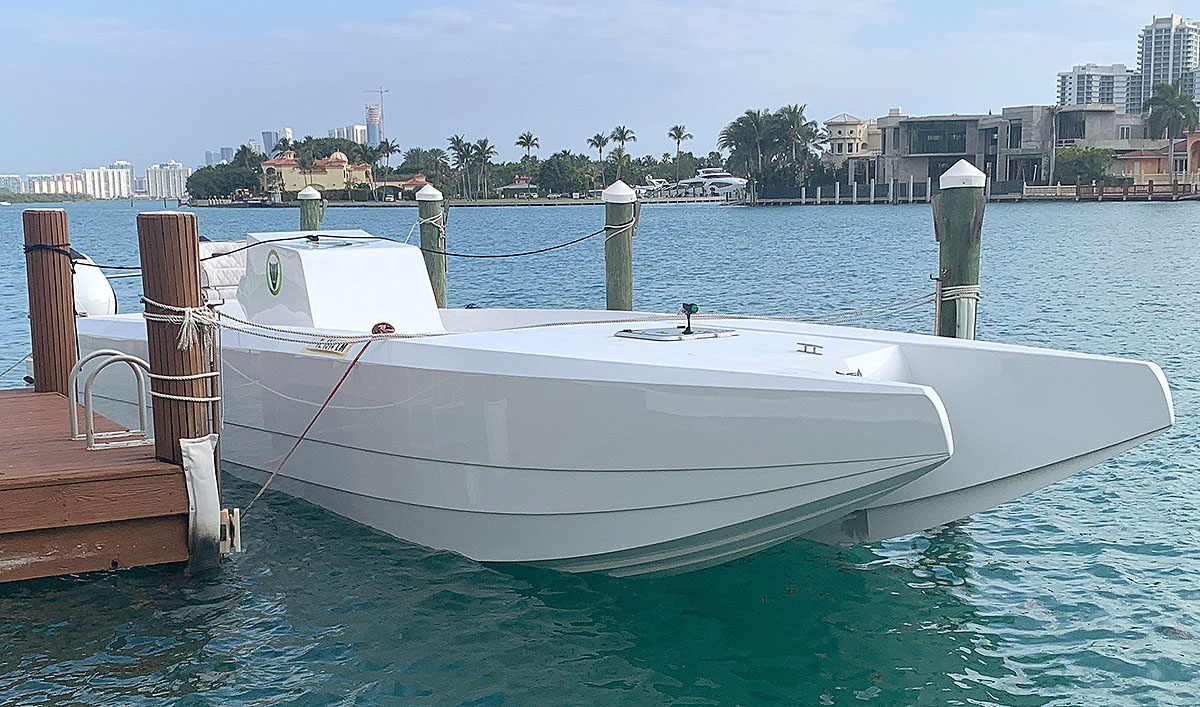 Along with its new J43 catamaran, the team at Jaguar Powerboats has some beautiful builds underway.

Clarke added that the J43 is a statement in hydrodynamics with steps engineered to generate massive lift to decrease the wetted 40-foot running surface and resultant friction. Complimentary to this, centerline pads draw air up under the hulls to maximize speed without sacrificing stability or maneuverability.

Clarke also said that the bows of the J43 are designed like a raceboat with a precise anti-stuffing angle that stops the boat from nose-diving at high speeds when in rough seas. He explained that if a particularly large wave is encountered, the hull rides up and over on the front of the aerodynamic tunnel. And if water does get into the boat, it’s self-bailing. As for draft, at a mere 18 inches, it will easily beach where other comparably sized boats have to remain anchored offshore.

There’s no doubt that with twin 627-hp engines, the J43 is expected to be unquestionably fast, but Clarke said it’s also incredibly fuel-efficient. At 60 mph at a modest 4,000 rpm, the dual Seven Marine outboards burn just 50 gallons per hour. He added that comparable performance monohulls of this size are redlining their engines while gulping massive amounts of fuel. 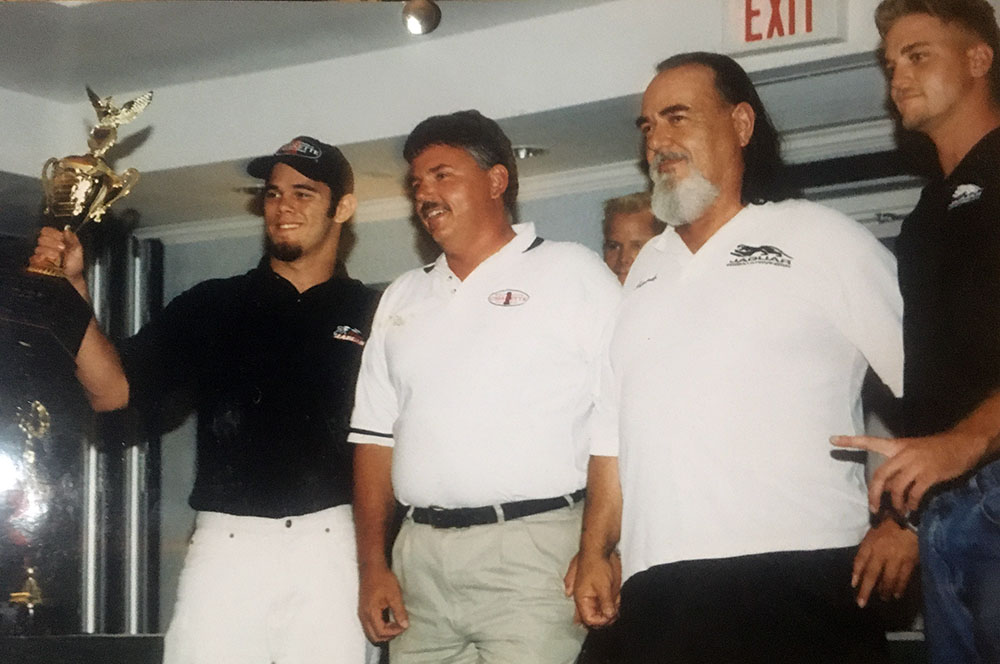 The 4,300-pound Kevlar-reinforced, race-quality unibody hull and deck of the J43 are built using 100 percent Core-Cell and vinylester resin. The boat is vacuum-bagged twice to ensure maximum stiffness and reduce any chance of delamination and dry spots. So confident in their construction, Jaguar Powerboats has a lifetime warranty on the hull and deck.

Completely customizable, the 43-footer is available in three configurations—family day boat, dedicated fishing and a cuddy cabin for overnight cruising. With a 9-foot 4-inch beam, there’s plenty of deck and internal space for any activity. Rigged per the customer’s specifications, the cat can be built with a range of fuel capacities from 200 to 600 gallons. Power options include two or four outboards or twin diesel inboard engines with a maximum 3,000 horsepower. As configured, hull No. 1 of the Jaguar J43 costs $750,000. You can check out a video of the boat here.

“We’ve spent the better part of a year testing the J43’s hull and engines in every conceivable condition,” Clarke said. “Our focus has been more on performance and safety than deciding the color of the LEDs on the hardtop. I guess my dad was right: racing is in my blood!”

If you’re going to be in Miami, be sure to go get a closer look at the new J43—it’s definitely on my list of must-see boats at the show.