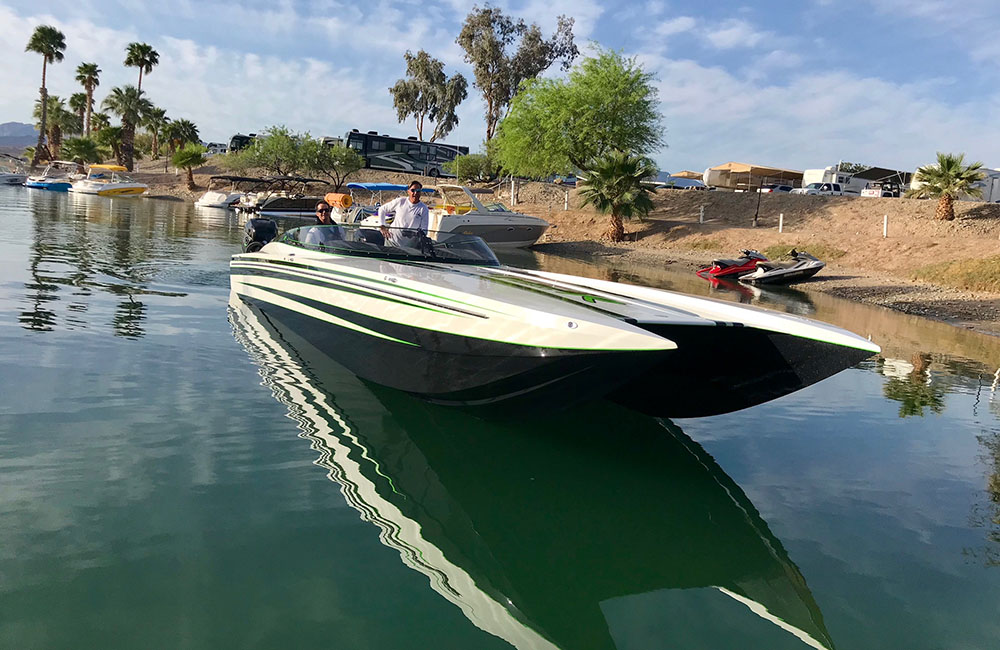 Look for Tony Chiaramonte and the new DCB M33R at an event near you this summer.

For those who pay any kind of attention to my stories here or on speedonthewater.com, the name Tony Chiaramonte probably doesn’t need a whole lot of explaining. His name comes up in pretty much every DCB Performance Boats new-delivery article as he handles a bulk of the hands-on customer service for the El Cajon, Calif., company in which he is part owner.

It also comes up most of the time in any top-speed shootout coverage as several DCB customers turn their boats over to Chiaramonte to get the most out of them on three-quarter-mile courses from Missouri to Arizona and places in between.

Related Link: The Art of the Delivery

Needless to say, the guy is busy—a road warrior without a doubt. The beat goes on this year as Chiaramonte is headed to Lake Havasu City, Ariz., his home away from home, for the Desert Storm Poker Run next week. From there, he’ll be meeting the company’s M33R demo model in Louisiana for the Tickfaw 200 Poker Run and then heading to the Lake Powell (Ariz.) Spring Run in June, the Texas Outlaw Challenge at the end of June, the Missouri-based Lake of the Ozarks Shootout in August, the Lake Cumberland (Ky.) Poker Run in September, the Lake Powell Challenge in mid-September and of course the annual DCB Regatta at the end of September back in Lake Havasu.

For some, that sounds like a dream job. For Chiaramonte, at times it is. Following a few days outside at the Lake Havasu Boat Show and the longest day of demo rides he’s ever given on Sunday, the last day of the show, it was far from a dream job. Driving DCB’s brand new M33R catamaran powered by Mercury Racing Verado 400R engines over and over doesn’t sound like hard work. But after logging close to 400 miles—about the distance between Los Angeles and San Francisco—he was exhausted and he still had boats to take care of and the work week ahead of him. 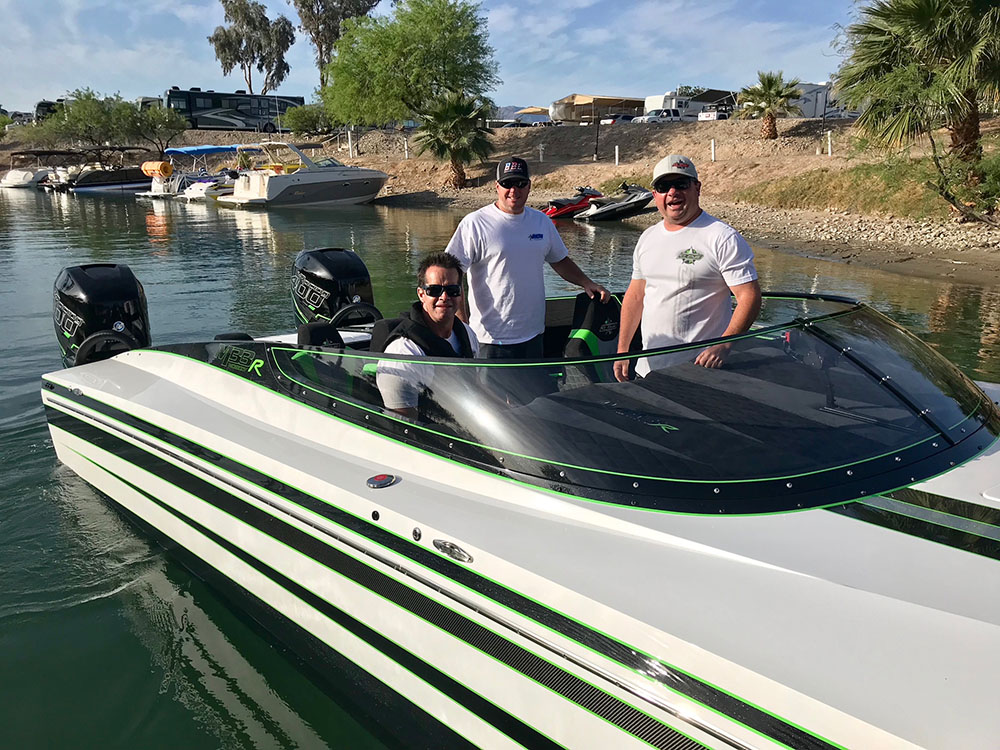 DCB customer Greg Timmons (from right) and his friend, Matt Brayton, were the first ones to grab a demo ride with Chiaramonte in DCB’s new 33-foot cat on Sunday.

“I think I did 16 demo rides on Sunday,” Chiaramonte said. “I ran up and down the lake so many times it wasn’t even funny. The boat is amazing, but I’ve already told you that so you can ask someone who went for a ride. We launched the boat at 7 a.m. and didn’t take it out until 7 p.m. It was a long day. The good news is that we only burned 147 gallons of fuel. That’s not bad for 380 miles.”

DCB customer Greg Timmons, who owns an outboard-powered M28 he took delivery of in 2017, was first in the line to catch a ride with Chiaramonte and he was blown away.

Admittedly in the market for a new boat, Brandon Allen owns a DCB F34 catamaran with twin 850-hp engines and used to own one of the company’s outboard-powered F26 models with a pair of Mercury Racing OptiMax 300XS engines. He said he really liked his 26-footer, describing it as fast and sporty but a little overmatched on a rough Lake Havasu day, he just wasn’t sure if another outboard boat was for him.

You’ll have a hard time convincing him otherwise now that he got a chance to drive the new 33-foot cat on Sunday. 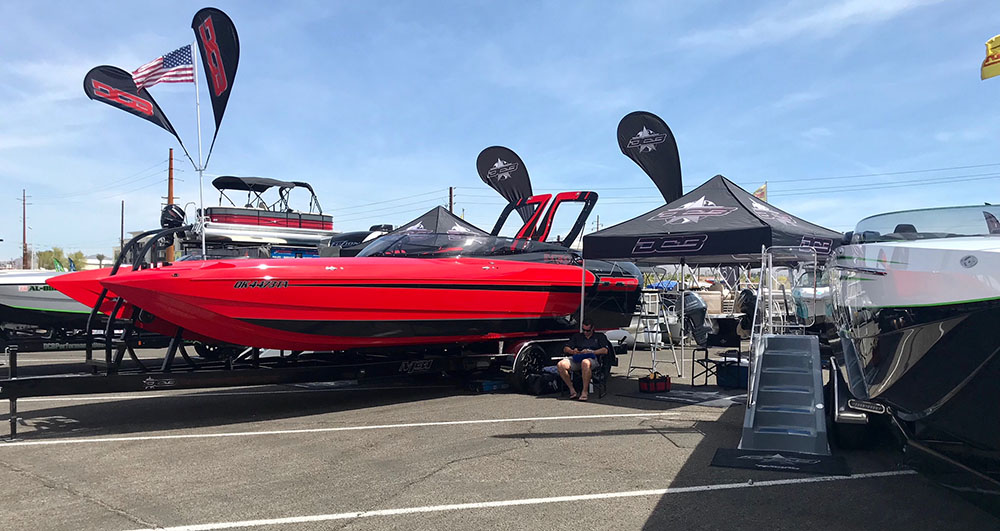 With three boats on display, Chiaramonte and the team at DCB lined up a few sales during the Lake Havasu Boat Show.

“Tony told me to be honest cause he knows I’m a critical person—I’m a helicopter pilot, I don’t have a choice but to be critical,” Allen said. “Anyway, I was expecting the boat to feel like a bigger version of my 26 or one of the M29s I’ve been in before. That wasn’t the case at all. It didn’t feel like an outboard boat on take off. I laid into it, full throttle, and it took off with the trim at zero. I couldn’t believe it. Then Tony told me to turn it without touching the trim. I thought he was crazy but I did it and the boat turned perfectly. It didn’t lean one way or the other. I turned it the opposite way and it went right back the other direction.

“I kept waiting for the transition when the boat got a little loose before settling back in, but it never happened,” he continued. “The boat went over chop like some of the bigger M35 Widebody models I’ve been in. I’ll put it this way—I couldn’t find anything to talk myself out of buying one. Everything I made the boat do, it did it perfectly. I’ve never driven anything like that M33R.”

And that’s exactly why Chiaramonte and the team at DCB are planning to hit the circuit hard this year with the new boat.