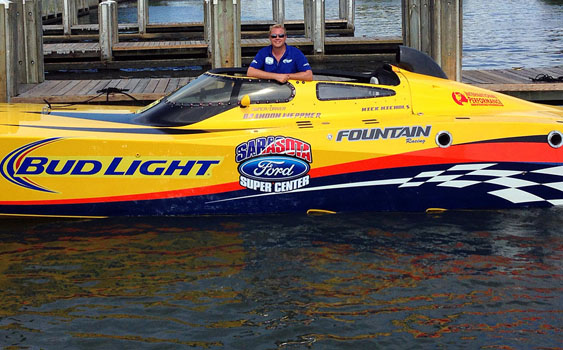 A grinning Brandon Weppner has had his eyes on the former Fountain raceboat for many years.

For many years Doug Utter, the owner of Utter Construction in Bethel, Ohio, heard about how Brandon Weppner was going to buy his iconic Fountain Powerboats raceboat that he converted into a four-seat pleasure boat in 2007.

Utter and Weppner, who is from Louisville and now lives in Sarasota, Fla., met about a decade ago at the Lake Cumberland Poker Run in Kentucky and their families became great friends after several annual houseboat reunions at the popular event.

“I remember when I first saw Doug’s boat, I could tell there was something mean about it,” said Weppner, who works in the business, handling marketing and customer relations for Nor-Tech Hi Performance Boats. “It just has that look. It’s extremely attractive and the boat is way ahead of its time with its layup and setup. It’s such a legend, too. I couldn’t take my eyes off of it.

“Since then I’ve been fortunate to run the boat with Doug several times at Cumberland; in fact, we’d really only see each other once a year at the poker run,” the 28-year-old continued. “I always told him I’d eventually buy the boat, so every time I saw him he’d ask me when I was going to come pick up my boat, and I’d tell him ‘One of these days man.’”

Well that day has come and Weppner couldn’t be more excited about what he has in store for the boat, which is one of a few specially constructed race-rigged 42-footers built in the early 2000s by the Washington, N.C., company that are arguably the fastest and most decorated boats in offshore racing history. 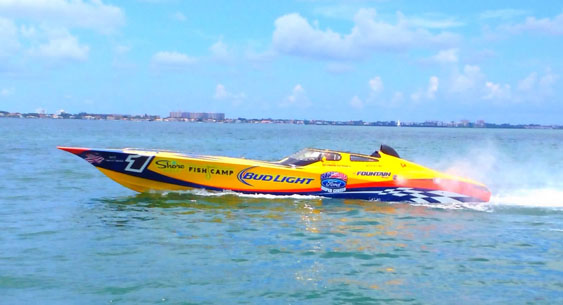 Weppner, who owns the Fountain with his friend and business partner Nick Nichols, a former NFL defensive lineman who also lives in Sarasota, has gathered a handful of partners in hopes of turning the boat into a celebrated icon in and around the Sarasota community.

“We want to be a part of as many events in Sarasota as possible and allow people to get up close and personal with the boat,” said Weppner, who wanted to thank his sponsors—Bud Light Gold Coast Eagle, The Warrior Empowerment Foundation, Sarasota Ford, Owen’s Fish Camp, Shore Diner and Utter Construction. “We plan on being involved with several notable charitable events and hosting a few of our own Wounded Warrior rides throughout the year.” 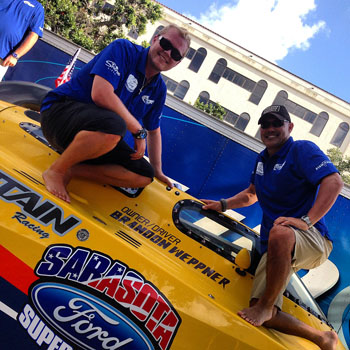 Weppner and Michael Greenwell of the Warrior Empowerment Foundation hang out on the boat during the Sarasota Grand Prix street parade.

An obvious promotional vehicle thanks to the logos, Weppner said the boat, which is powered by a pair of 525-hp Mercury Racing engines, might turn up at a few poker runs outside of Sarasota such as Lake Cumberland and the Emerald Coast Poker Run in Destin, Fla.

“I will continue to preserve this legend and keep it active for all to enjoy,” added Weppner, who had the boat out for the first time last weekend with his brothers, Robbie, 30, and Nick, 14, and Doug Valentine, whose Sarasota-based company, International Performance, is taking care of the boat. “The boat performed great on Saturday. We took it out in the morning to get some seat time in it and get a good feel for it. We didn’t run it too hard as the motors only have an hour on them, but the boat has such a purr to it. It just sounds awesome and it runs spectacularly, as you can imagine.”

After some testing in Sarasota Bay and a stop at South Lido Beach, Weppner and company stopped for lunch and put the beautiful boat on display at Marina Jack in downtown.

“Several people have asked me if I’m going to race the boat,” said Weppner, who has logged plenty of seat time in JBS Racing, the turbine-powered Mystic Powerboats catamaran that has since been converted for pleasure use. “The unique thing is that the boat is actually race-ready. It has racing seats, it’s fully set up with oxygen and it has a canopy that is outfitted with a special turn buckle system that secures and seals the canopy back down on the boat.

“I’d race it, but it’s such a beautiful boat that I don’t want to tear it up,” he continued. “I’d rather use it as a promotional tool and bring some joy to veterans and children less fortunate than us who could never get so up close and personal with a full-blown canopy raceboat.”

There’s no doubt Weppner has his dreamboat. Now only time will tell if he can make his dream come true by turning the storied Fountain into a celebrated icon of his community that enriches the lives of many.