Bill Harrison’s new 29 CCX should be in one piece and ready for paint by the end of this week.

“Here’s some news for you,” Joe Schaldenbrand said as I made my second stop at the Sunsation Boats booth during the Miami International Boat Show several weeks ago. “We just sold a 29 CCX to one of our best customers, who happens to be building a 36 SSR at the same time. That’s a first for Sunsation—nobody has ever had two boats going at the same time.”

Schaldenbrand—one of the well-respected brothers behind the Algonac, Mich., company—seemed genuinely shocked.

“I wasn’t even trying to sell him a boat either,” he continued. “Bill Harrison, a great customer of ours, was here at the show today and was looking at the 29 and asking some questions so I told him we could do one to match his 36 and he said OK, let’s do it. I couldn’t believe it.” 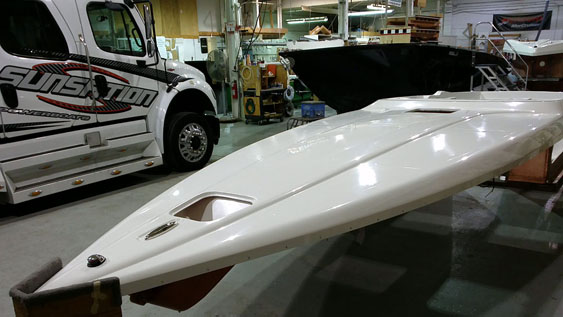 Harrison is expecting his 36-foot Sunsation sportboat to be delivered a few weeks after the 29-footer.

According to Harrison, who said he has always owned two boats because his go-fast boats aren’t always the most practical, he had no intention of buying another boat when he traveled to last month’s Miami show. He already sold his Formula Boats 382 FASTech to make room for his new 36-footer, which will be powered by staggered Mercury Racing 540 engines, and wasn’t planning to replace his Edgewater center console. 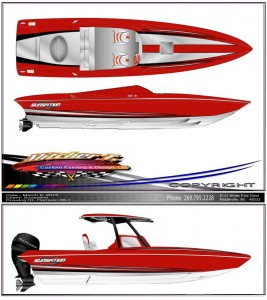 For the first time ever, Sunsation is building two boats simultaneously for the same customer—a 36 SSR (top) and a 29 CCX.

Well, sayonara Edgewater, hello 29 CCX. Ordered with a pair of Mercury Verado 150 engines, Harrison’s 29-footer will feature an identical paint job to the 36 SSR that will be handled by Mitcher T Custom Painting & Design, the Middleville, Mich., shop that has painted his previous Sunsations, which include a 32-footer and two 43-footers.

“Basically both boats are just like my other boats—every one has been red, black and silver with a simple interior to match,” said Harrison, who splits time between homes in Atlanta and what he considers the best area to boat in the country—Florida’s Emerald Coast. “It’s hard to go wrong with the Sunsation-Mitcher T combination. You’re dealing with great, talented people who take customer service seriously.”

Since the Miami show, the Sunsation crew has been hard at work on both of Harrison’s boats. According to Schaldenbrand, the 29 CCX leaves this Friday for Mitcher T and the 36 SSR will be ready for its paint a week later. The boats will return to Sunsation for rigging and Harrison is expecting to have them both by April or May.

“No, I never thought I’d be doing that,” Harrison laughed when asked if he ever thought he’d have Sunsation building him two boats at the same time. “That’s what happens when you go to the Miami boat show I guess. I just went to see my friends, Mitch [Kaplan] from Captain’s Choice and the guys at Sunsation, and all of a sudden I’m getting a 29.

“To be honest, I was considering a 34 CCX but the 29 is more of what I was looking for,” he added. “I don’t really need the power or the size of the 34—I’ll have all of that and more with the new 36. I need something for more casual boating. With the 29 I feel like I’m getting the best of everything between its appearance, its handling and its utility.”