You are at:Home»Awesome Boats»Mystic’s New Center Console Hits The Water 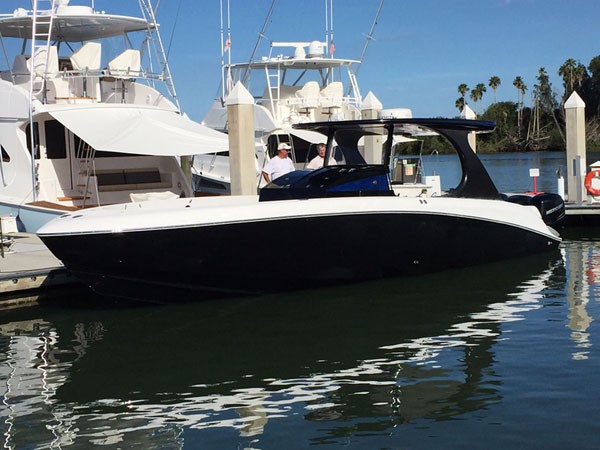 More than a year in the making, the first Mystic M3800 luxury center console hit the water for its first test session yesterday.

Fresh from the factory and without its interior niceties such as cushions and side panels installed, the first Mystic Powerboats M3800 luxury center console hit the water yesterday with John Cosker, the owner and founder of the DeLand, Fla., center console and catamaran company, and Scott Sjogren of Mystic Powerboats Sales on board. And though both men said they’re looking forward to showcasing the finished product later this year, they also said they were delighted with the performance of the 38-footer, which is powered by triple Mercury Marine Verado 350 outboard engines off New Smyrna Beach, Fla.

“The boat actually exceeded my expectations,” said Sjogren, who collaborated with Cosker on Mystic’s first luxury center console model—the M4200—which was released at the Miami International Boat Show. “It did things I didn’t dream it would do. It feels heavier than it is (approximately 12,000 pounds, dry) than it is in the water. The stability is unbelievable. And it has a lot of nice, really deep freeboard.

“With triple 350s, it feels like an M4200 with quad 400-hp Mercury Racing Verado outboards—acceleration is great,” he continued. “It’s just sporty.”

With 24-inch-pitch propellers on the 350-hp outboards and 300 gallons of fuel, Cosker and Sjogren ran the 38-footer to 77 mph. They plan to test the boat again with 25-inch-pitch props to see if they can get boat to 80 mph, but both men emphasized that “hitting a number” is a relatively low priority for them.

“With a center console, speed is third or fourth on a list of performance attributes that includes ride quality, dryness, wind protection and more,” said Cosker. “While speed is important it’s not paramount.” 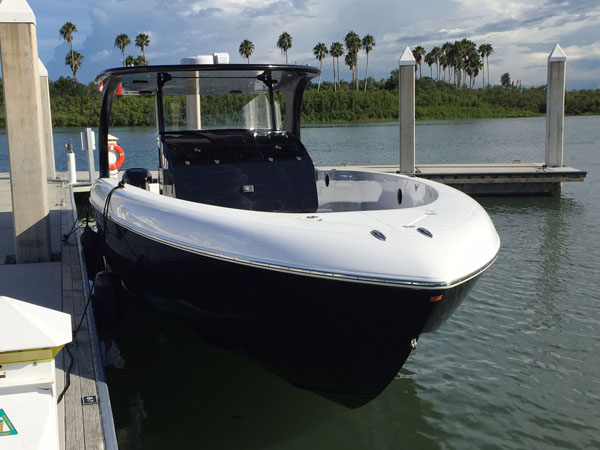 The two-man Mystic test team gathered a few numbers beyond top speed from yesterday’s test session. The M3800 came on plane in three seconds and ran from 40 to 60 mph in seven seconds. Running 45 miles per hour, the boat got a relatively fuel-efficient 1.5 miles per gallon of fuel.

Like its larger sibling, the M3800 is laid up using the vacuum infusion process. For extra strength, the boat’s hull is reinforced with carbon fiber.

Though the helm station of the M3800, which has a 10’7” beam, is the same as that used in the M4200, the cabin is a bit shorter as dictated by the 38-footer’s lesser dimensions. Cosker and Sjogren said that despite their eagerness to see the boat dressed with its full interior, they are more than satisfied with the current end product, which faced its share of prototyping and production challenges and was more than a year in the making. While they could have “pushed” to get the M3800 ready in time for the Lake of the Ozarks Shootout debut next week, they opted to be patient and wait until Mystic’s newest model is completely ready to show.

“With the M4200, we brought out prototypes at the 2015 Miami Show but we want the M3800 to be perfect before we debut it,” said Sjogren. “But we are so happy it’s done other than getting its interior installed. It’s going to be a homerun.”

“It’s a fantastic boat all around, right out of the box,” said Cosker. “Ryan Zivitski (Mystic’s production manager) and everyone else on our team did a great job.”