Whether ordered with stern drive power or outboards, the 29 Savage will be Active Thunder’s answer to performance center consoles. (Renderings by Chris Dilling/Grafik EFX.)

For those of you who’ve wondered when Patrick Haughey, the owner of Active Thunder Powerboats in Pompano Beach, Fla., will get into the performance center console game, I have a simple answer: When hell freezes over. That sums it up nicely.

It isn’t that Haughey–whose stepped V-hull closed-deck sportboats enjoy a near-fanatical following–hasn’t tried to go the center console route. In fact, you could say he was ahead of his time—maybe a little too far ahead—when Active Thunder had a 31-foot center console in its line from 1999 to 2001. You could also say, especially after tackling the Key West Poker Run in the 31-footer, he couldn’t wait to get rid of it.

“I hated that boat,” said Haughey. “I sold the model to Adrenaline boats. I think they built a couple and then retired it.”

When it comes to performance center consoles, Haughey would rather beat them than join them. That’s why earlier this month he unveiled plans for a new model called the 29 Savage. Available with either outboard or stern drive power, the 29-footer will be in the Active Thunder line specifically to compete with center console models of similar size.

“It’s a people hauler designed to go head to head with center consoles—without all the wind on everyone because everyone in the cockpit is protected,” said Haughey. “I can’t imagine how cold all those poor guys in the center consoles were during the Miami Boat Show Poker Run last week.” 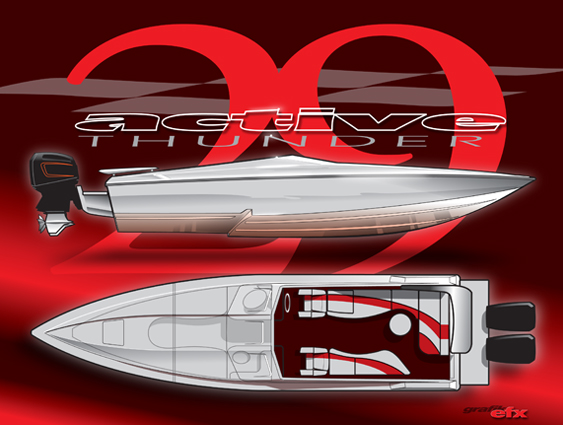 Haughey said that in addition to the upcoming 29 Savage, he is considering offering outboard power on larger Active Thunder models.

If the interior layout of the 29 Savage reminds you of something you’d find in a contemporary towboat with its L-shaped lounges, you’re on the right track. Haughey used to own a Malibu Wakesetter, and he fell in love with the 21-footer’s interior layout and amenities.

“That was the best boat I ever had—it was the most fun,” said Haughey. “I took some of the things I liked about it and designed them into our new 29. It will have things like power-reclining lounges in the cockpit.”

Haughey had been considering releasing the 29-footer with outboard or stern drive power for several years, but didn’t feel the timing was right until one of his client’s lenders told him the insititution would resume lending on sportboats again. (Lending on go-fast boats all but disappeared after 2007.) That plus the general upturn in the boat sales in 2014—and the forecast is solid for 2015—convinced him that it was time to release Active Thunder’s alternative to center consoles.

Haughey also sees the 29 Savage as an entry-level sportboat, especially with outboard engines. Like many high-performance marine industry veterans, he correctly believes there is a shortage of entry-level offerings in the segment.

With performance center consoles getting larger and larger, the 29 Savage is—without question—targeted to compete with the smaller models in the segment. But Active Thunder does have larger closed-deck sportboats that could—if the demand presented itself—be reconfigured for outboard power, according to Haughey.

“Don’t forget, we did the 33 with twin 300-hp Yamaha outboards,” he said. “We are definitely considering something larger in our line with outboards.”

One more thing you should never forget? Until hell freezes over, and maybe not even then, Active Thunder won’t build a center console.