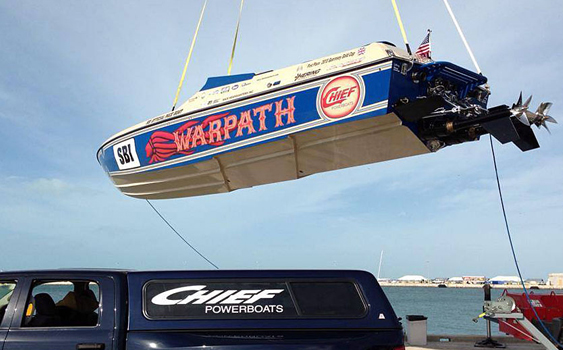 Warpath, the 42-foot endurance raceboat from Chief Powerboats, was a pace boat at the SBI Key West World Championships in early November.

It’s quite possible that you’ve been following along as OffShoreOnly.com member Panther has been providing updates in the “Another Chief in the Mold” thread in the newly formed Chief Owners section. Or maybe you’ve been keeping up with the build via Facebook. Either way—or even if you know nothing about the latest project to come out of the Chief Powerboats’ camp—there is a lot of buzz surrounding the second 42-footer built by the company in the last year.

The follow up to Warparth, the 42-foot race boat that competed in the United Kingdom’s Venture Cup Prologue Race in June, the new 42 Warrior recently left the company’s assembly shop in Port Orange, Fla., and arrived earlier this week in Elkhart, Ind., at The Art of Design (TAOD) for its one-of-a-kind paint job. 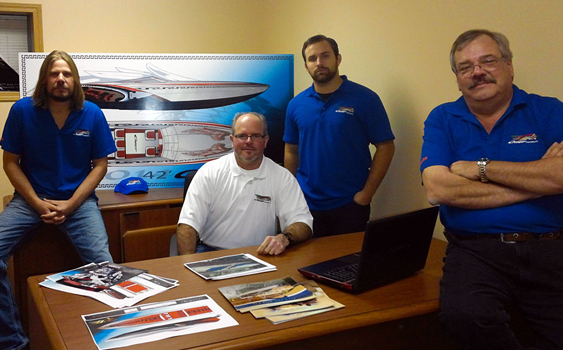 Being handled by well-known performance boat painter Dean Loucks, who founded TAOD in 1990, the graphics and additional custom touches have been inspired by new Chief Powerboats dealer Eric Dorris of Fire Flys Performance Marine in Crown Point, Ind. Dorris, who is the nephew of Playcraft Boats Jim Dorris and a dealer for the popular pontoons manufactured at Missouri’s Lake of the Ozarks, has always been a fan of offshore powerboats, but never owned one—until now.

Through a meeting of mutual friends, Dorris crossed paths with Scott and Daryl Grady, two brothers from Indiana who have owned Chief Powerboats since 2004. The Gradys joined forces with “The Chief,” legendary offshore racer Bobby Saccenti, nearly a decade ago, parked the business in 2008 because of the recession and are now getting the ball rolling again as the economy improves. Proof is in the trifecta of new dealers—Fire Flys, Lake Ozarks Marine in Osage Beach, Mo., and Super Boats Eur Div in Cote D’Azur, France.

And of course in Dorris’ new ride, which began life as a personal boat but will take shape as a dealer demo boat thanks to Dorris’ enthusiasm and confidence in the brand and the Grady brothers. Both Dorris and Scott Grady, president of Chief, are excited about the new style and modern features of the new 42-footer that will feature a pair of short-staggered Ilmor Marine 725 engines and Ilmor Indy drives under the engine hatch. In fact, they both referred to the changes as a fresh take on a classic design.

The new 42 Warrior from Chief Powerboats left the Florida factory en route for The Art of Design in Indiana last week.

“We’re taking a boat with a lot of heritage and bringing it into the new millennium,” said Scott Grady, whose stepson, Vincent Tice, works for Chief as well. “We’re so excited to have Dean Loucks involved. He has amazing vision and enthusiasm and he’s great when it comes to customer service. We’re thankful Eric has such a good relationship with Dean and wanted to have The Art of Design paint the boat.”

After its paint job is complete, the 42 Warrior is headed back to Florida where some finishing touches will take place at the shop under Saccenti’s watchful eye before it’s delivered to TNT Custom Marine in Miami for final rigging and setup. The stepped-bottom boat is expected to be on display at the Miami International Boat Show in February, along with Warpath, which served as a pace boat at the Super Boat International Key West Offshore World Championships earlier this month.

“At the end of the day, we’re going to do everything we can to bring a completely customizable product to the customer,” Dorris said. “Our goal is for owners to be able to make the boats as unique as possible.” 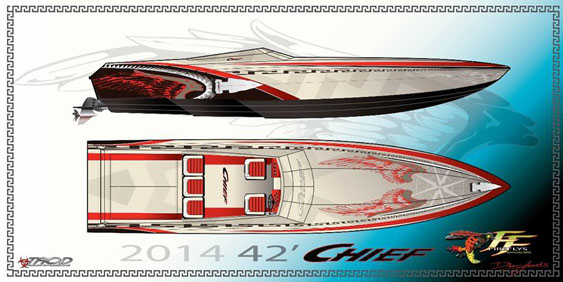 Renderings of the new 42-foot V-bottom, which is being painted by Dean Loucks and The Art of Design for Fire Flys Performance Marine in Crown Point, Ind.

The 42-footer isn’t the only thing happening at Chief Powerboats. According to Scott Grady, a new 21 Scout—Chief’s 21-foot sportboat—is in the mold. Grady also said the company is working on a couple of new models. Although details are not complete, he said one model would be larger with a focus on the European market. A smaller version of the 42 Warrior also is a possibility.

Whether or not future sales meet the expectations of everyone at Chief Powerboats is anyone’s guess; still it’s clear that the team and its recent additions are serious and enthusiastic about the road ahead.