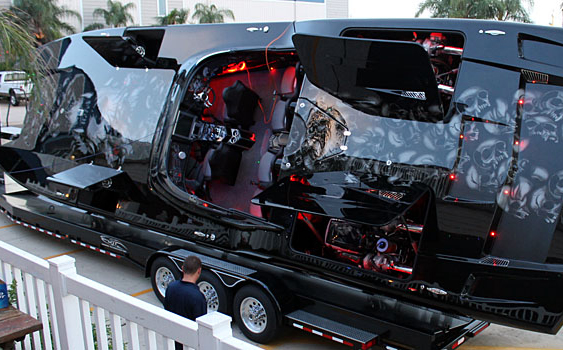 Last week I learned about the latest catamaran from Marine Technology Inc. (MTI) that was recently delivered to Mario Williams, defensive tackle for the Buffalo Bills. Williams, who in 2012 signed the most lucrative contract ever for an NFL defensive player, ordered the 446 catamaran almost a year ago from Bullock Marine in Seabrook, Texas.

So, on the same day I rolled into the Houston area for the sixth annual Texas Outlaw Challenge with my speedonthewater.com trailer in tow, I was invited to attend an MTI party to celebrate Williams’ new boat at Sam’s Boat, a lively waterside seafood restaurant and bar in Seabrook that is part of the Endeavour Marina complex on Texas’ Clear Lake. The all-black boat, which has a Big Bad Wolf theme in homage to the Wolfpack mascot at North Carolina State where Williams was a student athlete before being drafted No. 1 overall by the Houston Texans in 2006, was on display for partygoers to examine more closely from the patio of Sam’s Boat.

And while everyone in attendance seemed to be blown away by the company’s second 446, which is 6 inches wider than the standard 10-foot, 6-inch MTI 44, what really matters is what Williams thought about the boat, which is powered by twin Mercury Racing 1350 engines. 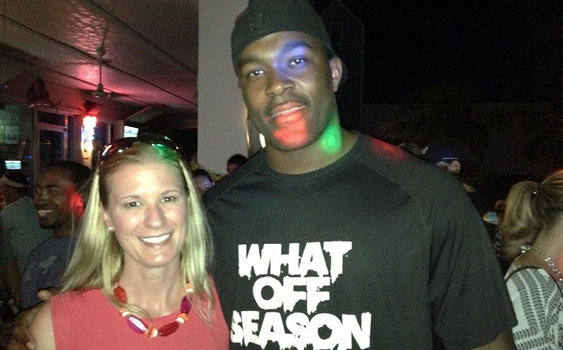 NFL defensive end Mario Williams was a good sport about taking photos with many of his fans at the boat unveiling party, including Houston resident Julie Osterman.

“I’ve been so anxious to finally see the boat so once I got a chance to look it over and ride in it, I was overly excited,” said Williams, who grew up in and around the water in North Carolina fishing with his grandfather but has never owned a performance boat. “I think the boat looks amazing and it rides even better. At the end of the day, I’m glad I chose an MTI.”

Williams said he had been talking about getting a boat with Bruce Bullock of Bullock Marine for about four years and he finally pulled the trigger after riding in a couple of MTIs during the 2012 Texas Outlaw Challenge. 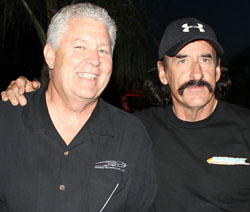 “I knew I always wanted a boat, I just never really felt like I had the time to get one,” said Williams, who happily took pictures with dozens of people, including the DJ, during the party. “After last year when I came out here and rode around with some of the guys and their MTIs, I was like, ‘I’m getting a boat.’”

Although he’s only taken the Big Bad Wolf out a couple of times so far, Williams said he’s been learning all he can from Bullock since taking delivery of the 446 more than three weeks ago. He also realizes that the power in the engine hatch is something that shouldn’t be taken lightly.

“I know I’m not going to be out there trying to drive the boat at top speed all the time, that’s not my thought process,” Williams said. “I want to enjoy the boat and cruise around. It’s like a Lamborghini or another exotic car—I’m not going to sit there in my car and go 200 mph just because it can. A boat is the same way. The capability is there. I didn’t want to do something on a smaller scale and later wish I had done this or that, so I started at the top. I figured if I was building my dream boat, why not dream big?”

Bullock said he was influential in Williams choosing the turbocharged 1,350-hp engine package.

“We kind of pushed Mario that way because that’s the ultimate power and it’s very dependable,” Bullock said. “You can always go out there and run as fast as you want or you can cruise at 100 mph and relax knowing that you’re not pushing the motors too hard. The reliability on the 1350s is just over the top. We’ve been out a couple of times and haven’t had one hiccup.”

The combination of wolf and skeletons makes for a unique paint job on the new 446 MTI.

Overall, Williams is extremely appreciative of the work that went into the boat by the crew at MTI’s Wentzville, Mo., factory.

“The boat is comfortable, easy to see out of and pleasing to the eye,” added Williams, who said he’s planning to sit back and enjoy his first poker run in the boat and go from there. “The detail work and paint job on it is incredible.”