You are at:Home»Awesome Boats»Simply Irresistible: Catnip Coming To Boyne Thunder 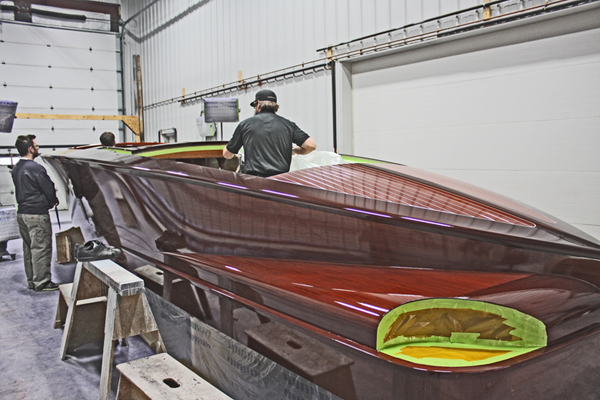 Visitors to the Boyne Thunder Poker Run boat-and-car exhibit will see Catnip in its soon-to-be final.

With an estimated top speed of almost 60 mph, a Van Dam Custom Boats creation dubbed Catnip probably will be the slowest boat at the long sold-out Boyne Thunder Poker Run July 7-8 in Boyne City, Mich. That’s even more likely given that the hand-built, wooden 30-footer won’t be among the 100-plus high-performance V-bottoms, catamarans and center consoles during Saturday’s poker run. But as part of Van Dam’s 40th anniversary celebration, the soon-to-be-completed Catnip “runabout” will be displayed in Friday’s night boat-and-car exhibit on Main Street, and — like all Van Dam builds — it promises to be a show-stealer.

Powered by twin 385-hp Ilmor Marine engines “customized” for the project, Catnip won’t have to travel far to reach Boyne Thunder’s street festival as Van Dam also is located in Boyne City. Design work on the boat began in early 2015, and construction started a year later. According to Ben Van Dam, the president and naval architect of Van Dam Custom Boats, the boat is “styled with subtle Art Deco cues blended with signature elements of 1930s Ventnor runabouts.” Van Dam and design principle Michel Berryer, who has been with the the company for more than 20 years, worked closely on the project.

Ilmor Marine has supplied power for Van Dam Custom Boats projects since 2011, and according to Jessica Gamarra, the company’s director of marketing and communications, the people at the company were delighted to be chosen to supply power for Catnip.

“Van Dam is a very special partner to Ilmor, as we are both Michigan-based companies (Ilmor is headquartered in Plymouth, about four hours southeast of Boyne City) that value quality, performance, technical sophistication and aesthetics,” said Gamarra. “Additionally, as Ilmor has been open for collaboration on custom projects — from custom appearance to custom wiring and plumbing — that has been something we feel Van Dam has appreciated in our relationship. Catnip has a pair of Ilmor-red 380-hp MV8 6.0L OPS inboard engines with Velvet Drive V-drive transmissions, as well as a few minor modifications to the plumbing system for installation ease.” 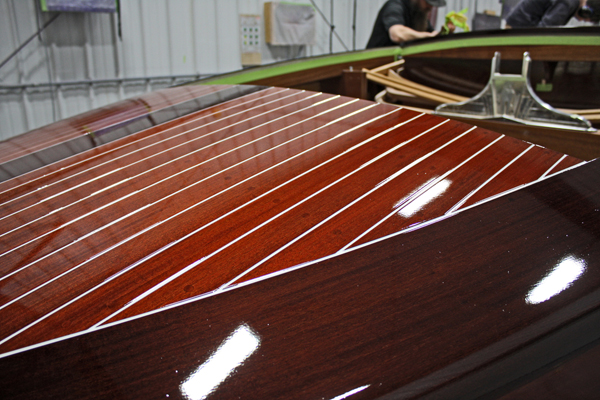 As it is with all Van Dam boats, Catnip’s woodwork detail is exquisite.

The craftsmen at the company were equally pleased to be working with Ilmor again.

The boat’s billet CNC-cut hardware includes unique transom-hung rudders as well as sculpted stainless exhaust tips “integrated into the roll of its transom.” The cockpit boasts a retractable Dietrich top that disappears below deck, an ice chest in the seat base, a flip-up bolster for the helm seat, a custom banjo-steering wheel on a tilt helm and a hidden-retractable 12-inch chart plotter.

Of course, as is true for all Van Dam creations, the only way to truly appreciate Catnip will be to see it in a person, and that opportunity will be there for everyone strolling Main Street in Boyne City on Friday evening during the Boyne Thunder Poker Run weekend. And even with all the heavy-hitting, contemporary catamaran and V-bottom hardware on display, Catnip is sure to stand out.