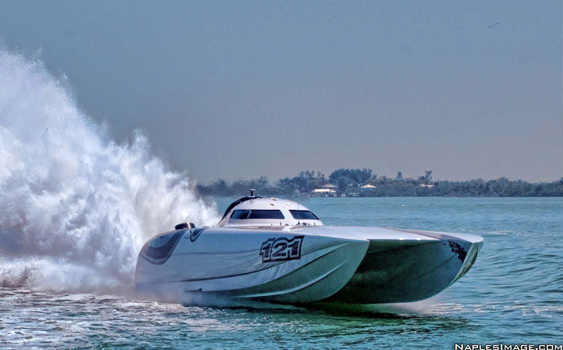 Now owned by Tom Borisch, the former JBS Racing catamaran will be dressed in new graphics (below). (Photo by Jay Nichols.)

On a matter unrelated to this column, I called Mike D’Anniballe at Sterling Performance Engines in Milford, Mich., this morning. I actually called him to check in on his 1,700-hp turbocharged engine project, which is still happening but not on the front burner at the moment. That’s because of Sterling’s ongoing long-term testing of engine parts for the automotive and industry and because of its solid marine engine rebuild business.

“We’ve been very busy with rebuilds—that’s been a good business for us,” said D’Anniballe. “To tell the truth, we do more rebuild work fixing things that other builders messed up than anything else and it’s been really strong this spring.” 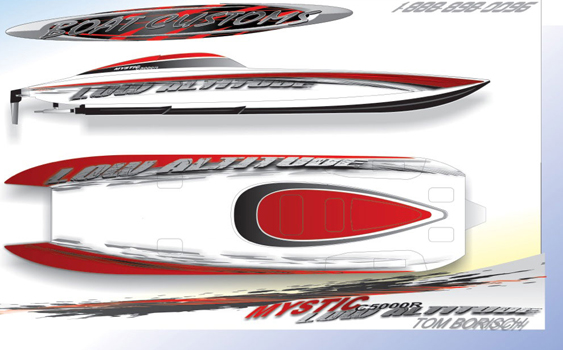 Dave Leonhardt at XT Innovations—you read about him here last week—in Bucyrus, Ohio, tells a similar story. Right now, he has 12 boats in various stages of progress at his boat interior design and restoration shops. And more are on their way. His business is booming.

Yes, my friends, it’s spring, the season that many of you, especially those of you who live in the Northeast, thought would never come. Yet here it is at last, and every spring things from complete boat restorations and engine rebuilds to trailer polishing and soft-sided cooler acquisition are in full swing. It runs the gamut.

On the high-end side of things, Tom Borisch has purchased the former JBS Racing 50-foot Mystic catamaran for the poker run circuit this summer. Mystic principal John Cosker describes Borisch, the former owner of a 50-foot Mystic cat with Mercury Racing 1350 engines, as “psyched.” And who could blame him? He’ll be running a sexy boat with twin 1,850-hp turbine engines and a new graphics package this season. 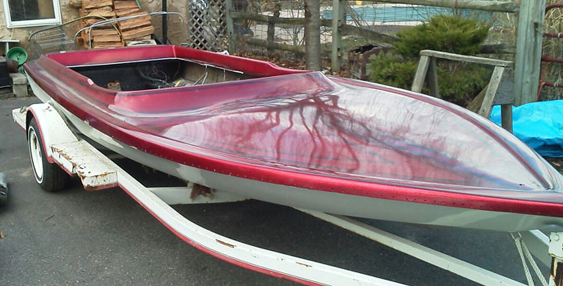 For Stinson, restoring this 18-foot jet boat is the first step in getting back into an offshore wave-tamer.

And yet—Borisch is no more psyched than Chris Uzzolina, a BMW technician who lives in Charlotte, N.C. Uzzolina is in the process of having his pride and joy—a 1986 Chaparral Villain III sportboat—restored. Uzzolina says he will pump about $30,000 into the project, which has led more than a few members of the offshoreonly.com community to question his financial acumen, if not his sanity. But the good-natured 30-year-old shrugs it off. He is absolutely pumped up about his soon-to-be-restored 23-footer, and while early on he stated his goal was to run 100 mph in the boat, he really does not care that much about top speed. He just wants to get his restored baby back on the water.

Well-known offshoreonly.com member Sean Stinson, who also happens to be the new brokerage sales manager at Campisano Marine in Brick, N.J., also has a restoration project going. He’s every bit as psyched as Borisch and Uzzolina, but for a completely different reason. Stinson is refurbishing an 18-foot jet boat to sell so he can buy another project boat to fix up and sell, and then likely another one to fix up and sell. His ultimate goal? To boat-flip his way into an offshore bruiser. 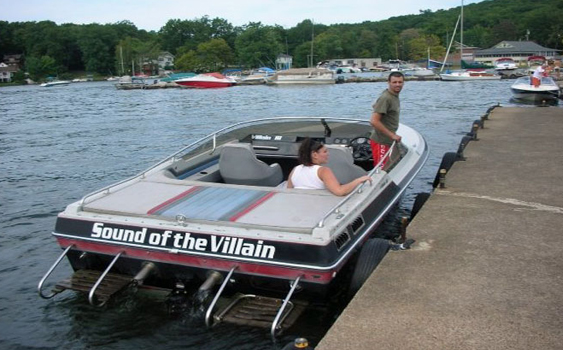 Chris Uzzolina is having this vintage Chaparral sportboat completely gutted and restored.

Tomorrow afternoon I head out for Desert Storm in Lake Havasu City, Ariz. I know I’ll see some of the latest and great new high-performance powerboats the world has to offer. And while there’s nothing like new hardware—I appreciate it as much and maybe even a little more than the next guy—I love the reincarnated and restored stuff just as much. Because frankly, that’s what most people own.

Spring is here. Let the sun shine and let the fleet—new and old—take to the water. Regardless of your ride, it’s been a long time coming and it’s going to be another great season.