Hustler Powerboats owner Joe LoGiudice was happy to hand over the keys for his new 25 Talon to Ohio boater Dean Anderson.

In an interview almost four years ago, Hustler Powerboats owner Joe LoGiudice said he was most interested in targeting the entry-level performance boater. Two years later, with Hustler continuing to churn out impressive 388 Reloaded and 39 Rockit V-bottoms, LoGiudice told me during a visit to the Hustler facility in Calverton, N.Y., that he remained focused on reaching the next generation of customers—hence the acquisition of Checkmate Powerboats by Global Marine Power (Hustler’s parent company) a few months prior.

Since that visit, Checkmate, which is based in Bucyrus, Ohio, has continued to produce quality sport boats in the 18- to 30-foot range, while Hustler has delivered several offshore V-bottoms, some 29 Rockits and, for the first time in a few years, a 25 Talon catamaran.

Anderson’s 25 Talon is the first one Hustler has built with a 565-hp Mercury Racing engine.

Because it’s the first 25 Talon with a Mercury Racing 565 engine—and because Hustler is building another one with outboard power for the Miami International Boat Show in February—the boat is newsworthy. But what’s more interesting about the 25-footer is that it was ordered by a customer from Ohio who purchased a new Checkmate 2400 Pulsare with a Mercury Racing OptiMax 300XS last year.

“This is my third boat in three years, yeah I know, not the wisest financial decisions, but I’ve got an awesome boat to show for it,” said Dean Anderson, who bought a twin-engine Yamaha sport boat before selling it to get the 24-foot Checkmate that he said topped out at 75 mph. “My fiancé, Gina, whose family introduced me to the boating world, told me the Yamaha wouldn’t be fast enough. I’m a toy guy, I like cars and motorcycles, and I thought 50 to 60 mph would be plenty fast. Then I got motored on—a lot.

“Gina was right,” continued Anderson (get used to it buddy, the wife is normally right). “I called Checkmate since they were right here in Ohio and decided to buy the 2400 Pulsare that was at the 2014 Miami show. It was a nice boat and we had a great time with it. But I was still getting motored on. So I started looking at cats.” 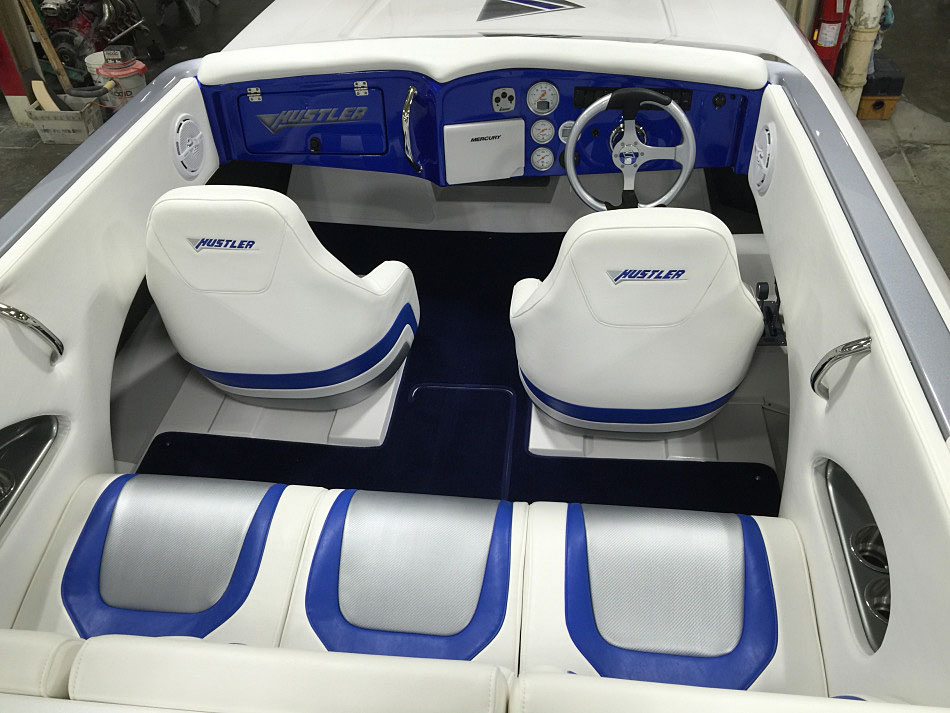 Anderson, who usually enjoys local lakes such as Buckeye Lake and Indian Lake but also ventures to Smith Mountain Lake in Virginia, said he researched a variety of sport catamaran brands from Skater Powerboats to Eliminator Boats. Because of the Checkmate family ties, he also reached out to Hustler about its 25 Talon.

“Earlier this year I spoke with Joe [LoGiudice] and told him I wanted to build a cat so he did me fair on the trade and we started the process,” said Anderson, who drove to New York to pick up the white and blue cat in early November. “I wanted a 100-mph boat and we got that—it ran 103 mph when they tested it. The boat is absolutely stunning; the quality is so nice. I haven’t found a single thing out of place and all I’ve been doing is looking it over in my garage because I won’t be driving it until it warms up.”

Anderson traded in his outboard-powered 24-foot Checkmate for the 25 Talon.

Despite less-than-ideal weather, Anderson and LoGiudice were able to take out the boat, which features a Bluetooth radio, Mercury VesselView 7 display and Boat Command system, before Anderson hauled it back to Ohio.

“The boat is so incredibly stable and solid, and it handles real nice,” Anderson said. “I can’t wait for next year so we can start using it. In the meantime all I can do is thank the crew at Hustler for being so easy to work with and attentive, and for building such a beautiful boat.”