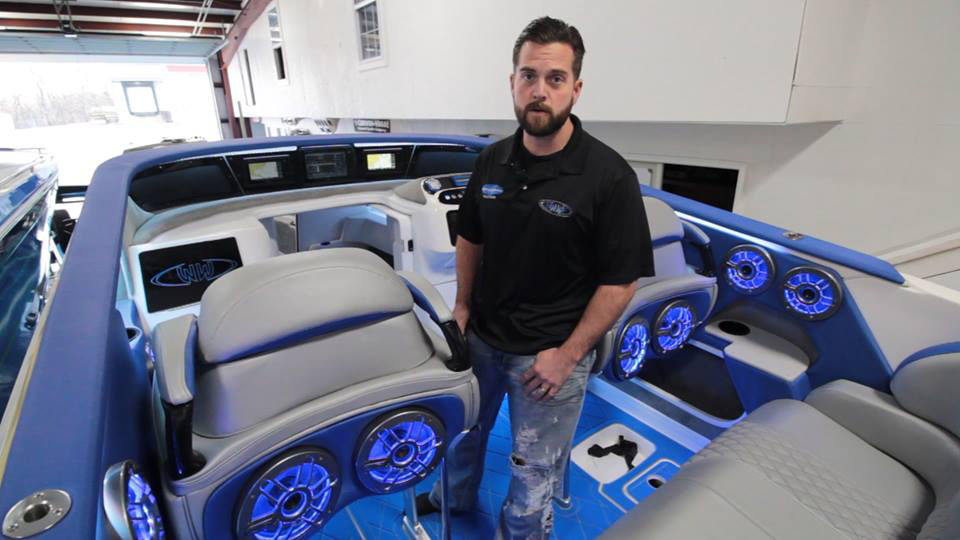 Greg Dutka turned to Justin Wagner (pictured) and the team at Waves and Wheels to update his 2006 Sunsation 32 SS Dominator. Photo by Shawn Kober/Big Planet Media

Between interviewing Greg Dutka, a Colonel in the United States Army and the owner of a Sunsation Powerboats 32 Dominator SS, and Justin Wagner, the owner of Waves and Wheels and Bluave Marine Audio in Osage Beach, Mo., there were several things that stood out to me. Obviously, the full interior overhaul is remarkable and the stereo system upgrade is out of this world—the YouTube video below demonstrates that. But the thing that amazes me is that Dutka, who is currently stationed in Bagram, Afghanistan, until mid-May, is getting his first glimpse at the updated 32-foot V-bottom, which the crew at Waves and Wheels recently finished, right here on OffshoreOnly.com.

That’s right, Dutka basically picked out a few options and let Wagner and his talented team tackle the project without any further involvement. Wouldn’t you love to see his reaction as he reads this and watches the video?

“With respect to selecting Waves and Wheels to work on my boat, I had been following the company’s builds for several years on the OffshoreOnly forums and was impressed by its work and creativity,” said Dutka, who shipped his 2006 model, which is powered by twin MerCruiser 496 Mag HO engines, back from Hawaii—where he was stationed for several years—to Texas about a year and a half ago. “The interior in my Sunsation was getting tired after years of nearly year-round use in Hawaii. Despite the fastidious cleaning after every use, the salt water, rain and humidity of living in Hawaii took a toll on the interior.

“I sent my boat back to the mainland—Austin, Texas—in 2016 to have the engines removed and serviced and the bilge re-rigged to clean up the evidence of running around the Hawaiian Islands for three years,” he continued. “I had James Speros, the owner and chief mechanic of MobileMERCman, pull the motors, inspect for saltwater impact and re-rig the engine compartment. He also pulled the drives and went through those. The motors and drive internals were in great shape, but the salt water had a significant impact on wiring, rigging and items like hose clamps and water passageways.”

Dutka said his friend, Jay Gadsby of Killeen, Texas, helped Speros replace the corroded parts, clean up the engine bay and ensure that the boat was mechanically in top condition.

“I’m convinced that pulling the motors was the only real way of addressing the salt—the way it sits now, it is essentially a salt-free boat,” added Dutka, who I wrote about a few years ago in an OffshoreOnly column entitled A Sunsation Way of Life. “With that addressed, during a cross-country road trip last summer I visited Waves and Wheels and was impressed with what I saw as well as the follow up with Justin, so a few months later I asked him to give the boat a new cutting-edge look. Basically, I wanted a boat that if Sunsation were to build a performance boat in 2018, it would look like the company’s showpiece. The professionalism of Justin and his entire crew was the reason I wanted Waves and Wheels to reinvent my boat.” 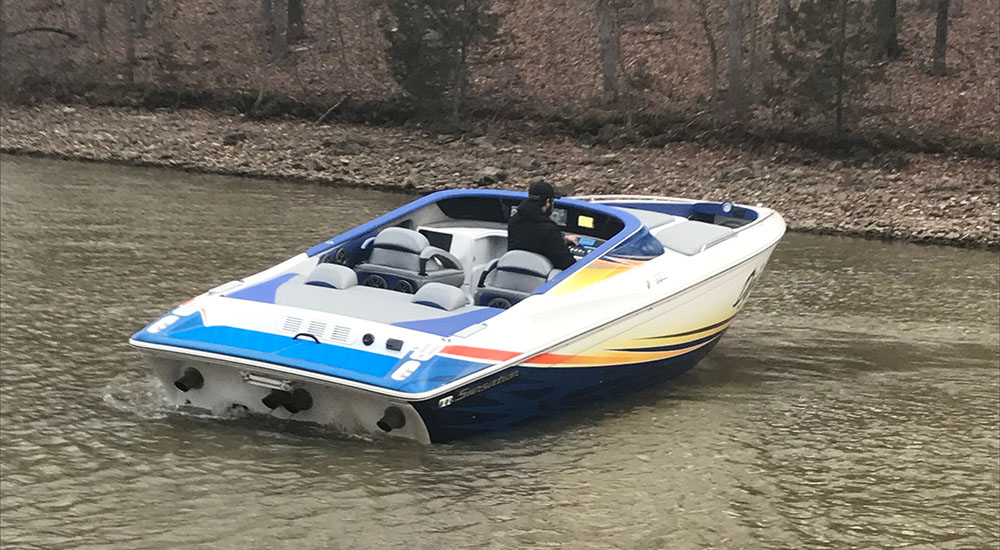 Reinvent the boat, dubbed Deja Blue, is exactly what Waves and Wheels did. The company also had some assistance from its frequent partner in projects—Maryland Offshore Performance Marine Center in Rockville, Md., which is going to eventually house Dutka’s boat as he is going to be stationed in Fort Meade, Md.

“We went all out on Greg’s boat—it ended up being a full-blown project rather than the upholstery and stereo upgrade we originally discussed,” Wagner said. “We gutted the boat and completely restyled the cockpit and the open bow. We removed the factory dash, which was mostly gauges, and created a more modern-looking dash, which we outfitted with a pair of 7-inch Garmin displays on each side of a 10-inch Garmin GPS screen, all of which feature engine control monitoring via Mercury’s SmartCraft as well as stereo controls via the Fusion head unit.

“We built a custom fairing with LEDs hidden on the underside that wraps all the way around past the front seats,” he continued. “We also created all new side panels to update the styling of the boat and produce a look that flowed up through the bow. For the rear bench, we designed it to have some separation with two individual diamond-stitched seats on each end. Of course, we teamed up with Blue Seas Fabrication out of California on the blue and gray diamond-style Seadek flooring for the cockpit, mid-cabin, open bow and swim step, which added some nice color to the boat. For the controls to the right of the helm, we used Livorsi Marine throttles and shifters, and we created a custom billet panel for the accessory switches above the new steering wheel.” 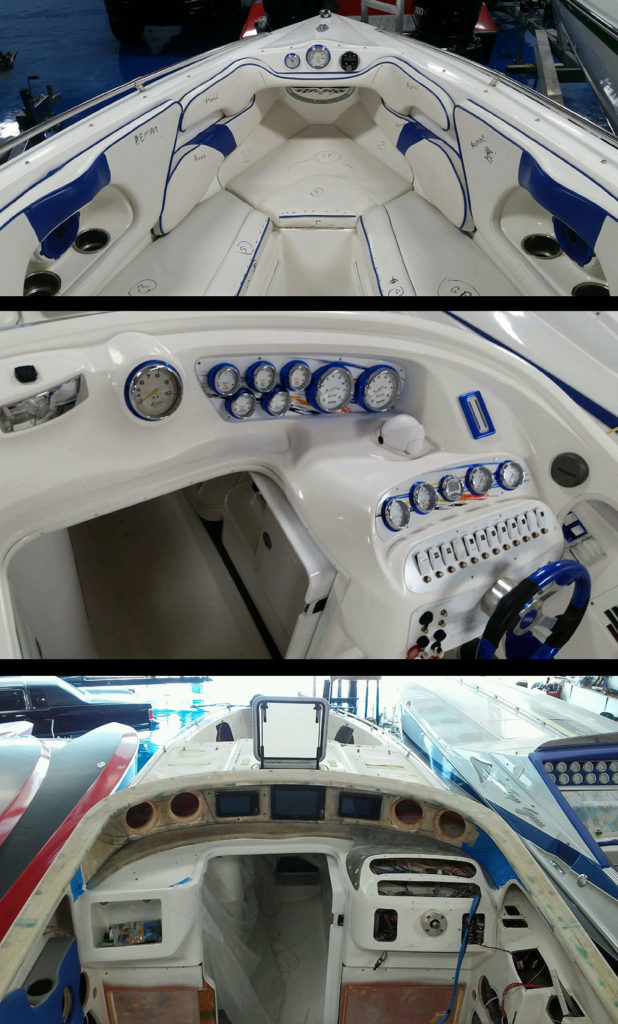 Waves and Wheels assessed the boat’s factory interior before coming up with the new design and starting the deconstruction and revamp process. Photos courtesy Justin Wagner

Wagner said they went wild with the stereo—big surprise. Not only does the helm have a pair of Bluave 7.0 coaxial speakers on each side, Waves and Wheels also installed two pairs of 7.0s hidden on each side of the dash. The crew added another eight 7.0 speakers for the rear seat passengers between a pair in each gunwale and a pair mounted on custom pods in the back of the front bolsters. If that wasn’t enough, four Bluave M10 subwoofers were installed below the rear bench in a free-air application. And for good measure, a pair of Bluave 9.0s coaxials was included in each gunwale in the restyled bow.

“We reshaped and redesigned so much in this boat that it’s one of my favorite projects we’ve ever done,” Wagner added. “I really like the look of the perforated marine upholstery and the touches of suede throughout. We added underwater lighting and a new battery bank, too. I sure hope Greg is happy with it. Right now, the boat is in the storage facility at our new marina, the Boardwalk at Waves and Wheels, which is still under construction.”

Dutka said his plan, once he redeploys next month, is to drop off his tow vehicle with Waves and Wheels to get the sound system redone, then head back to Hawaii for a few weeks to put his house on the market and pack up for his next military move.

“I am going to return to Lake of the Ozarks in June to pick up the boat and truck, then I plan to take the Tres Martin Performance Boat School and head down to the Texas Outlaw Challenge, ” Dutka said. “After the run in Texas, I’m going to tow the Sunsation to Maryland and head back to Hawaii to complete my final move off-island. I plan to cap off the boating season with my first trip and participation in the Florida Powerboat Club’s Key West Poker Run in November.”

Sounds like a great summer in a great “new” ride for someone who truly deserves it. I’d be remiss if I didn’t take the chance to express gratitude to Dutka for his years of service. Thank you, sir—and thanks to your lovely wife for her service as well.