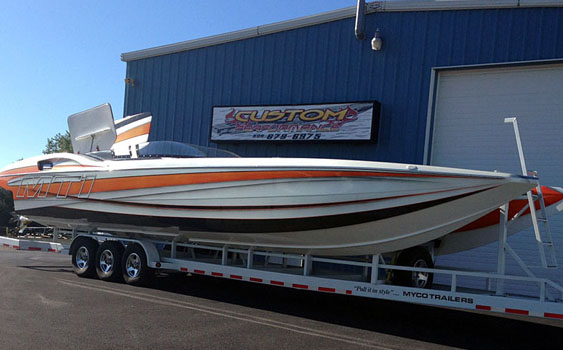 You’d never know Brian Shelton’s 40-foot MTI was built in 2008 thanks to the restoration the catamaran has undergone since coming off its trailer in a snowstorm 18 months ago (below).

In this OffshoreOnly world we’re immersed in, the chances of a boat story gone bad resulting in a happy ending is slim. So it’s always fun to share the ones that do work out. Take Brian Shelton’s first catamaran, which he’s planning to take to several events this summer, including next week’s Lake Cumberland Thunder Run, the Tennessee Powerboat Club’s Old Hickory Fun Run and the Florida Powerboat Club’s the Emerald Coast Poker Run.

Shelton, who has owned several Fountain Powerboats V-bottoms since the mid-90s, picked up a well-documented 2008 40-foot Marine Technology Inc. (MTI) catamaran and added more custom touches to the boat that had been repaired, repainted and reupholstered after falling off its trailer in December 2012. If you didn’t see it, check out the OSO thread following the boat as Pier 57 and a talented surrounding cast made the boat like new for the owner prior to Shelton. 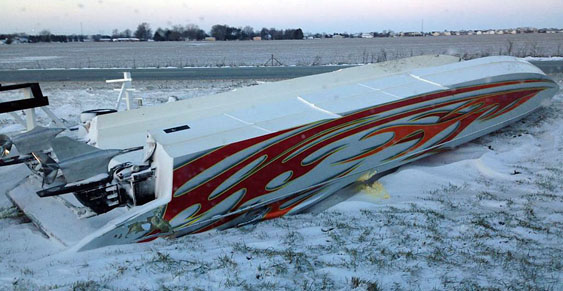 After trading in his 42 Lightning for the MTI, Shelton had the boat sent to Denny Kirkland of Custom Performance in Somerset, Ky., for some personalization and attention to the engine compartment. Shelton opted to keep the Mercury Racing HP700SCi engines from his 42-foot Fountain and install them in the cat. While he was able to use the Mercury No. 6 drives from the MTI, the exhaust remained with each boat so Shelton ordered new tailpipes from Custom Marine Inc., and purchased a set of “dyno time only” headers from Pier 57.

Kirkland received the boat in October and immediately de-rigged it and gave the bilge a fresh coat of paint. He then went to work on customizing the rigging hardware and painting parts of the engines Lamborghini orange to match the boat’s paint job, which was completed last year by Mitcher T.

Along with the new rigging, Kirkland was given the go-ahead to run with his own ideas, within a budget approved by Shelton of course. Engine compartment lighting, to complement the orange LED cockpit lighting under the six seats and two footrests, was a priority.

“I had seen some videos on infinity mirrors on YouTube and I knew I could do something cool like that in a boat,” said Kirkland, who is proud to call Custom Performance the home shop of Frisky Business, Mike Thornton’s 388 Skater Powerboats catamaran. “I thought Brian’s MTI would be the perfect boat to try to do something one-off like the mirrors. He trusted me, sat back and let my mind work to see what we could come up with. He was excited once he saw it. I know he was unsure of the idea throughout the process so I’m glad he’s happy with it.” 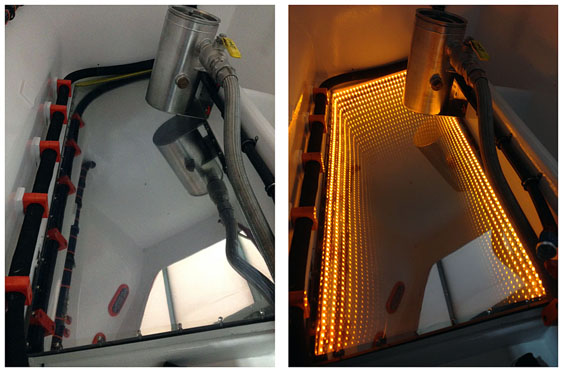 One of the infinity mirrors with or without the lights turned on.

The illusion of lighting that diminishes into a dark hole below each engine when turned on wasn’t too difficult to pull off, according to Kirkland. He said it’s basically one strip of lights sandwiched between two mirrors—one fully reflective, the other a one-way mirror—that gives it that infinite depth perception.

“The pictures do not do it justice; I promise you they don’t—not at all,” said Shelton, referring to the infinity mirrors. “I was hesitant and even a little nervous when Denny told me his idea. But after I saw it in person, I thought it was amazing. Apparently he has people asking to have the same thing done in their boats.” 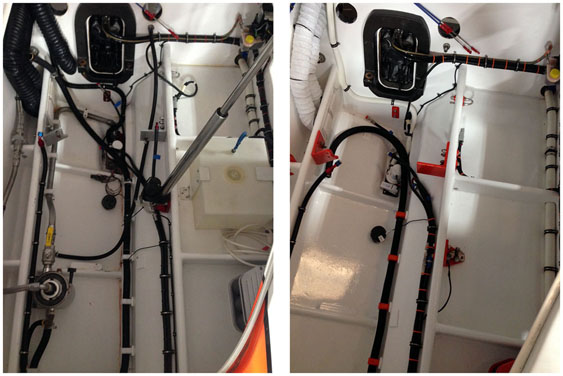 Pictures of the engine compartment rigging before and after Custom Performance got its hands on the catamaran.

Shelton, who lives in Evansville, Ind., and enjoys boating most often on Kentucky Lake and Lake Cumberland, said he’s still getting used to his first catamaran and loves the fact that he can run it comfortably at 120 mph with the twin 700-hp engines around 5,000 rpm.

“It’s a whole different feel than the Fountain—not that the MTI is better, it’s just completely different,” he added. “One thing I didn’t expect was how many people stop you to ask questions or take pictures. I guess it’s the paint and because it’s a cat, but I never expected the attention.”

Shelton better get used to it, especially at night because the boat will command attention dockside at every poker run he attends.