Yesterday I wrote a story for speedonthewater.com on Nate Michel, a Louisiana performance boater who purchased an Outerlimits 47 GTX a year ago and is in the middle of updating the 12-year-old 47-footer to really make it his own. And I’ll tell you what—it’s not easy to write about Michel, who is a regular at poker runs from the Tickfaw 200 in his own backyard to the popular Emerald Coast and Key West runs in Florida, without mentioning his good friend and fellow powerboat enthusiast Michael Pierce, who lives in Prairieville, La.

You see the two of them do a lot together—in fact, this week they’ve been assisting with the transformation of Michel’s F-650 tow vehicle—but there was really no need to get into their “bromance.” Kidding aside, they’ve been friends since 2001 when they both owned H2X models from Baja Marine. Now the two of them are proud owners of an Outerlimits.

It just so happens that Pierce’s boat—the one he bought as an early Christmas present for himself and Nikki, his devoted wife and fellow performance boat nut—is one most of us are familiar with. 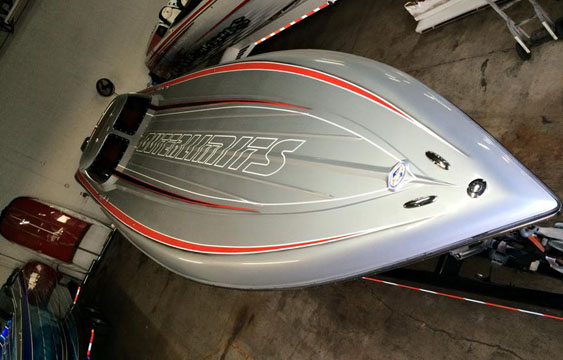 The 47-footer in its current state at Brand X Hi-Performance Marine in Pompano Beach, Fla. (Photo courtesy of Michael Pierce.)

Although he’d clearly like to restore the 2005 model to its former glory, Ventura said he respects Pierce’s choices. Brand X does have a few modifications that need to be done to get the boat ready for the poker run season, including technology system updates for the dash panels, a complete rigging overhaul and engine upgrades featuring 8.3L Whipple superchargers and electronic engine management systems from Tommy Hofstetter of Chief Performance.

“He just couldn’t pass her up,” Ventura said. “As iconic as the boat is, he knows that boat will never leave here because if he sells her, we’re buying her. I’m happy for Mike as he’s got a special boat, and I’m very appreciative of him and all of my customers.”