You are at:Home»Awesome»All Due Props 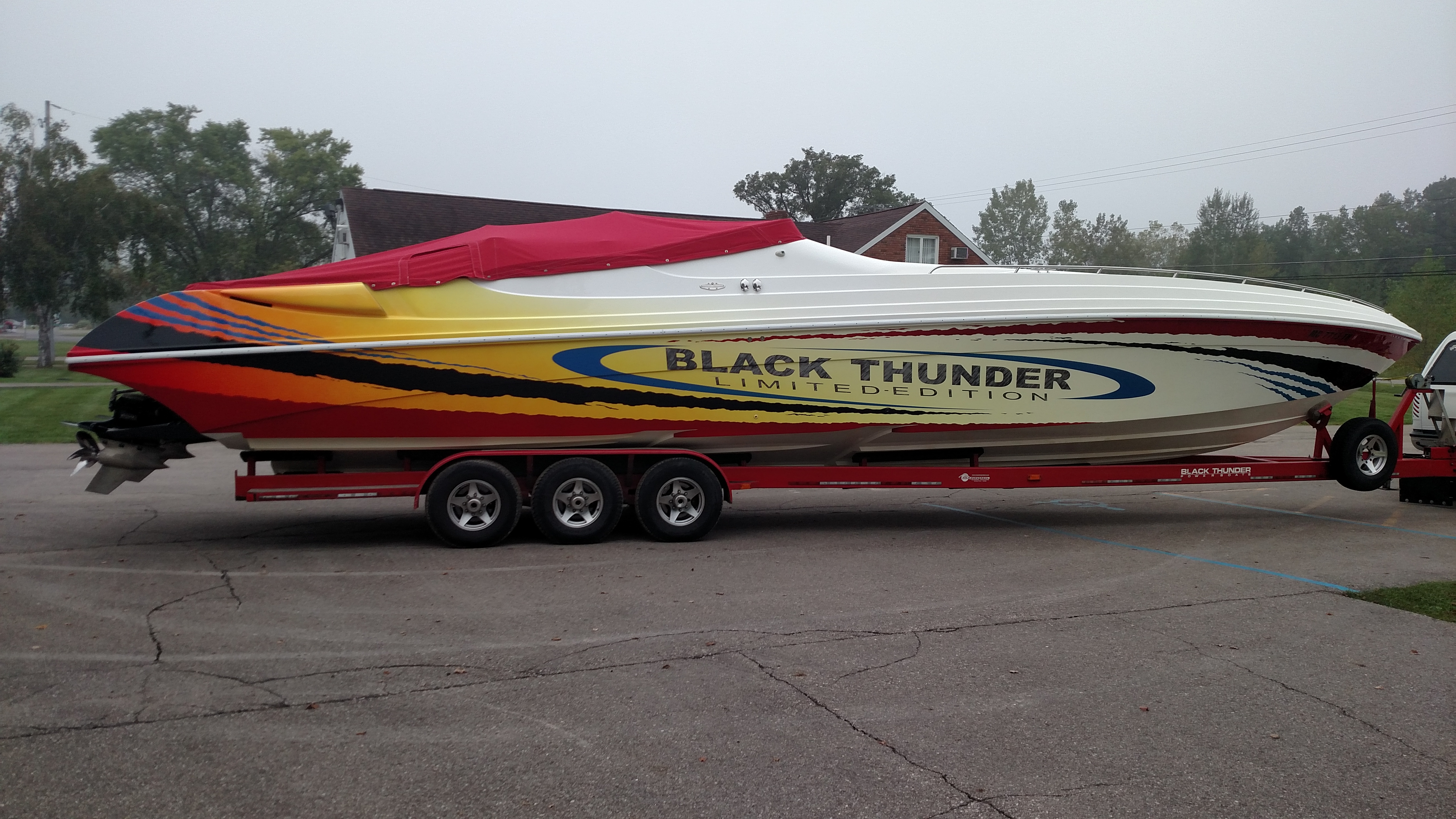 Thanks to modifications from BBLADES, this 46-foot Black Thunder has greater high-speed stability.

You don’t generally think of Black Thunder V-bottoms as “fast.” There are exceptions, of course—the 43-footer that Dennis Parvey and his son, Jason, piloted to 145 mph late last month at the Lake of the Ozarks Shootout in Central Missouri being chief among them. Still, in the current world of low-profile, cut-down deck V-bottoms with sit-down cockpits, a Black Thunder stands out not as sore thumb but frankly as a small building. And as comfortable a high-sided, deep-cockpit mono-hull with baller headroom in its cabin may be, it’s not ideally suited for speed.

Yet thanks in large part to BBLADES Professional Propellers of Princeton, Wis., there’s another Black Thunder laying down impressive speeds these days. Owned by Ryan Ward of Clio, Mich., and powered by twin supercharged and electronically fuel-injected 1,022-hp engines, the 46-footer that weighs more than 12,000 pounds reportedly has topped 96 mph—and has more in it.

Given that by his own estimate and that of Brett Anderson, the founder and owner of BBLADES, the boat was “a handful” that used to violently chine-walk at speeds greater than 65 mph, that’s impressive. Ward purchased the boat, which was built in 2002, five years ago and immediately went to work transforming it into a large hot rod. Working closely with his friend Ben Weirsum of Precision Power Offshore in Spring Lake, Mich., he transformed the supercharged 575-hp Mercury Racing engines into reliable beasts that nearly double output. 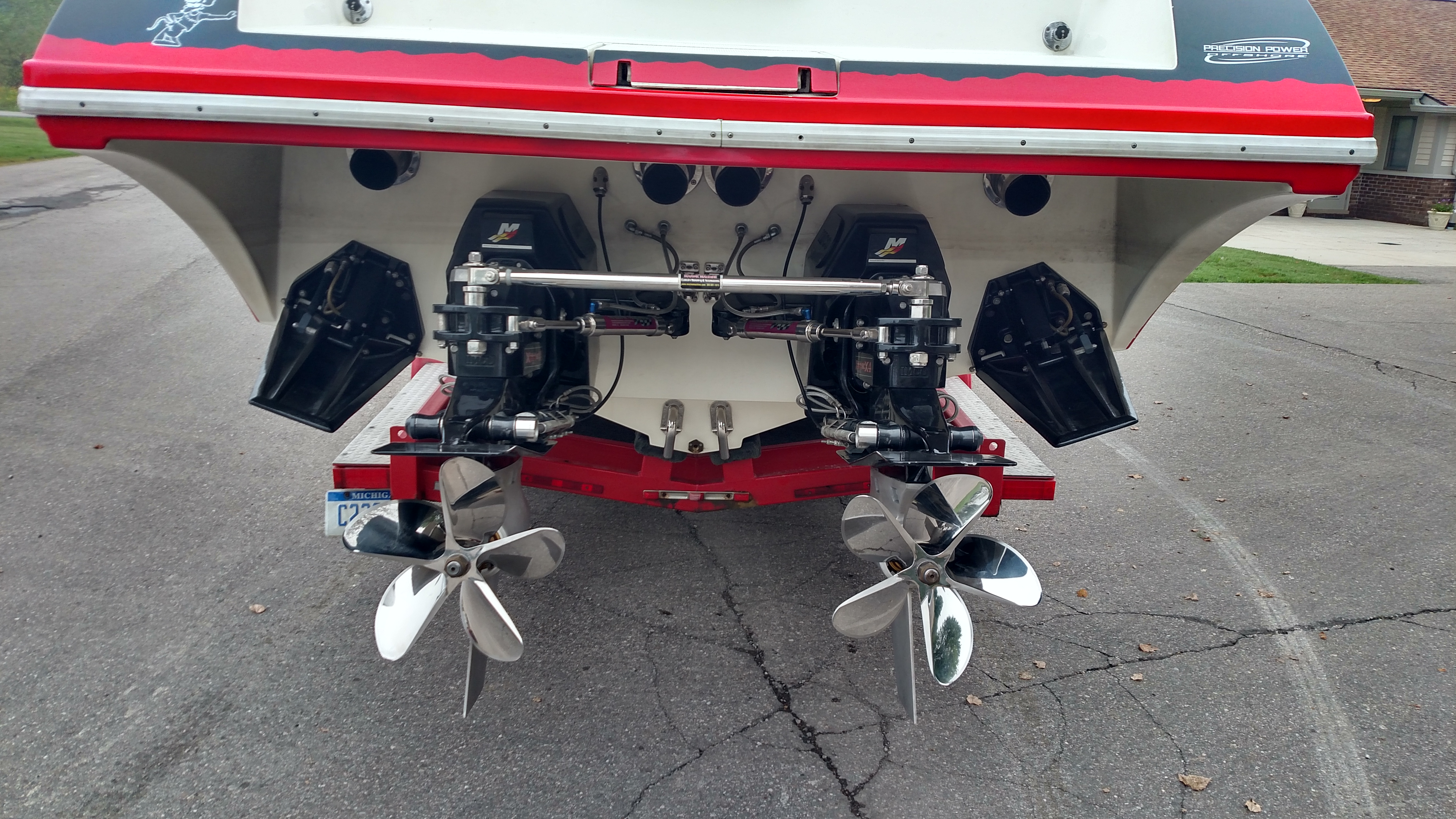 The business end of Ward’s V-bottom—note the rounded tips of the propellers.

Ward and Weirsum essentially dumped everything but the engine blocks and rebuilt the mills with Dart 360 aluminum heads, a MEFI 4B electronic control unit and a custom-mapped fuel-injection system of their own design. To handle the power, they swapped out the boat’s original drives with SCX4 units from IMCO Marine. They kept the supercharger boost to a relatively conservative 7.2 pounds, and even still the engines produce 1,100 to 1,200 foot-pounds of torque in addition to their substantial horsepower numbers.

Having all that power produced too much stern lift for the high-sided V-bottom, according to Ward, and it made the 46-footer unruly at higher speeds. And while helpful in cross seas, the Mercury Racing 380 K-Planes they installed didn’t resolve the issue.

“With our Hering 17-inch diameter, 30-inch pitch cleavers and that power we had so much stern lift that the boat would start chine-walking so badly that I would have to let off at 80 mph—it was dangerous, you could potentially spin out,” said Ward. “We knew we needed to lift the bow.”

The solution came through the folks at BBLADES. Anderson and company not only rounded the propeller tips, but reduced their diameters by 3/8-of-an-inch and changed their rake angles to 18 degrees.

“First, we worked with Ryan on spacer plates which helped, but the modifying props was the trick,” said Anderson. “We have various templates we use to create different size radii. The rounded tips and precision cupping ‘trick’ the propellers into thinking they are five degrees higher in rake angle. Accuracy is critical in this procedure, but we have done this process many times over the years with great success.

“The biggest hurdle?” he added then laughed. “It’s getting the customer to agree to letting us round the tips of their $10,000 set of props.”

Ward, who put said he put 65 to 70 running hours on his Black Thunder this season, could not be happier.

“BBLADES has done props on five boats for me now and I’ve always been happy,” he said. “Brett and Brad did extensive work on my props to get the bow lift we needed, and now we’re running great.”