You are at:Home»Awesome»Boaters Meet On Frozen Water Again 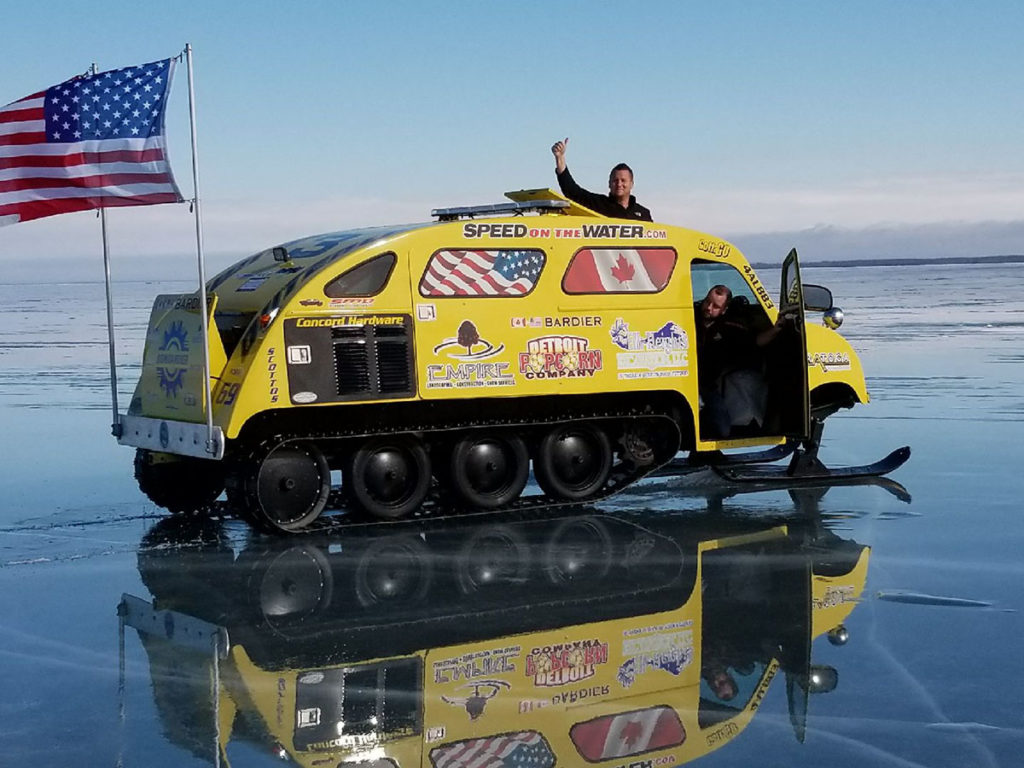 During his first “Friends Without Borders” ice-fishing trip on Canada’s Lake Simcoe, Dave Scotto and company went all out with the sponsor logos on this Bombardier Bus that seats between 10 and 12 people depending on how cozy you want to get. Photo courtesy Dave Scotto.

The texts and Facebook messages started last Thursday as many of the same folks who attended the fourth annual International Snowmobile Rally in Saratoga, Wyo., a month ago (read the story) were gathering north of the border near Toronto to do a little ice fishing on Lake Simcoe, aka “Scotto Land.”

“Are you coming? You should be.” “Why aren’t you here? You’re going to miss a great time.” Each person who messaged me was right, but I didn’t have a choice (not that I was dying to go sit in freezing temperatures hoping to catch a fish). I was on my way to Washington, N.C., to possibly witness history as the Fountain Powerboats camp was attempting to set a new American Power Boat Association V-bottom kilometer speed record.

But back to the ice fishing. Like his friend, Dr. Michael “Doc” Janssen, who owns the host location — Saratoga Hot Springs Resort — of the snowmobile rally that attracts boaters from across the globe, Scotto decided to invite his boating friends to his neck of the woods to experience what his friends and family enjoy doing on Lake Simcoe when it’s too cold to boat.

I know, ice fishing isn’t boating, but the group got together because of its common bond — performance boats. In this case, many of the attendees — including Michigan’s John and Julie Tokar, Pennsylvania’s Dave and Nicole Weschler, Washington’s Jason and Laurie Moe, Michigan’s Evan Singer and Toronto’s Jay Anthony Cooke — own a boat from Outerlimits Offshore Powerboats. 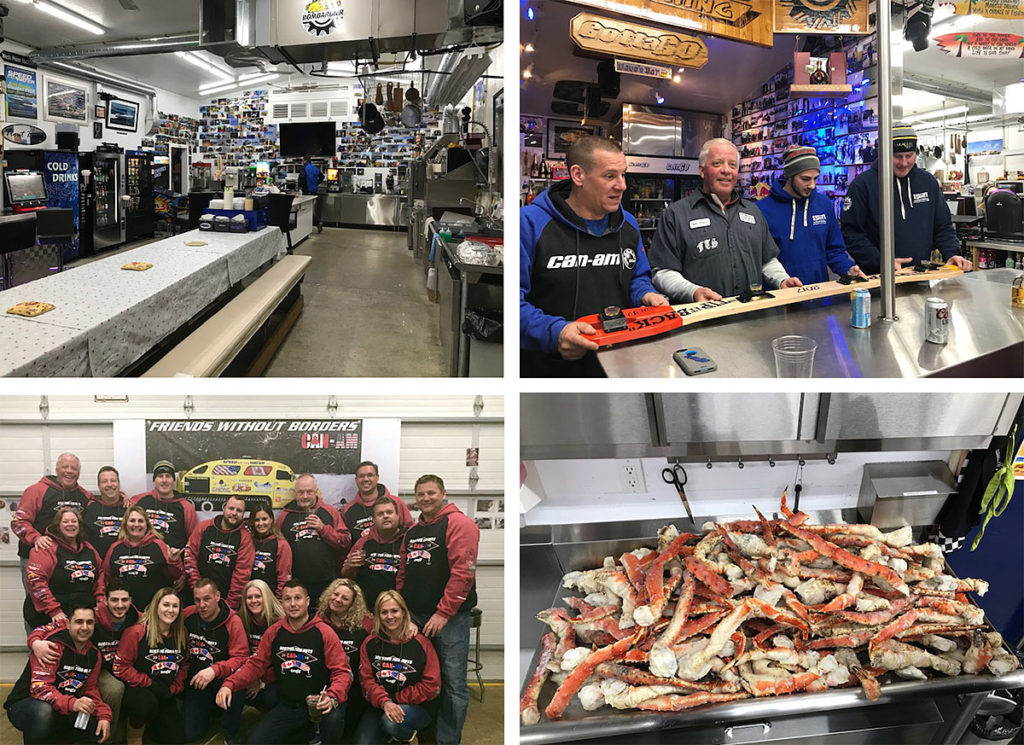 There’s no doubt the attendees of the “Friends Without Borders” ice-fishing trip had a fantastic time thanks to their hosts Dave and Dawn Scotto. Photos courtesy Michael Janssen.

Plus, the inaugural event — yes, Dave and Dawn Scotto (and their extremely helpful friends and family members) plan to host the gathering annually — involved driving some off-road vehicles that are almost as cool as a boat. Along with the vintage 10-seat Bombardier Snow Bus snowmobiles adorned with the corporate logos and such of Scotto’s friends, the smaller snowmobiles and all-terrain vehicles equipped with snow tracks were something else.

“I have so much fun with these people and I get a lot of joy out of seeing them have a good time, especially seeing their reactions when they catch a fish in one of the huts,” said Scotto of Concord Hardware and Team Gotta Go. “The weather wasn’t the best — we could have used more snow as a lot of what we had here melted away — but that’s out of our control. Everyone still had fun fishing for trout and whitefish five miles out on the lake in 65 feet of water.

“Thankfully our friends, Jason and Laurie Moe, brought 100 pounds of king crab legs from the Pacific Northwest so that was a special treat,” he continued, also thanking Tony Gutta from Ad-dictive Design & Promotion for attending and providing the awesome event gear.

“When your friends say, ‘Come ice fishing for the weekend,’ and then they have a fireworks show when you arrive, logo up a Bombardier Bus, make clothing for everyone, hang event banners and feed all of us more food and drinks then a five-star resort, all you can say is thanks for the amazing weekend,” Singer posted on Facebook. 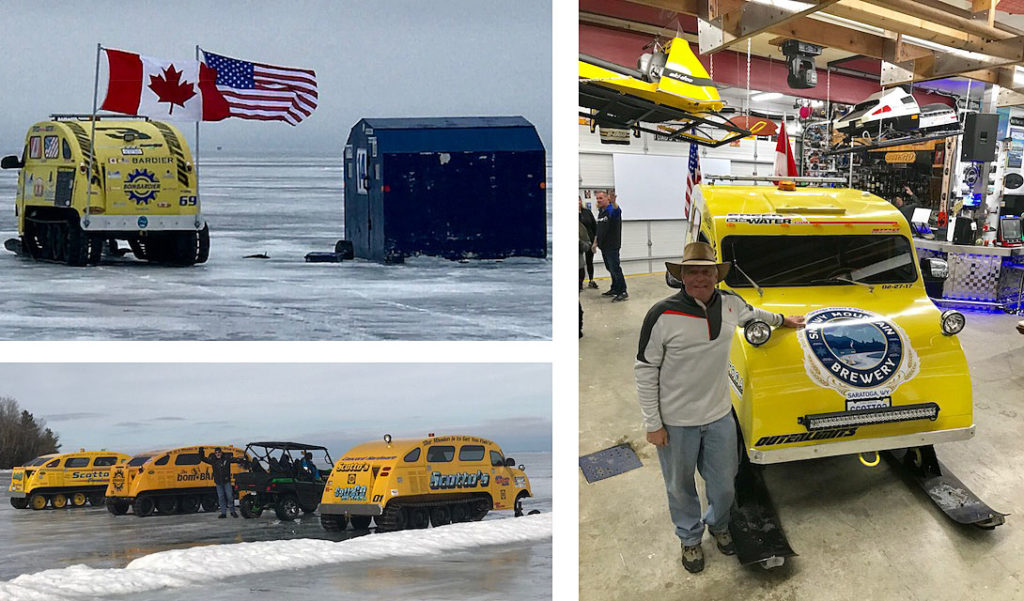 Janssen agreed, saying he had a fantastic time even though he prefers spearfishing in warmer water.

“Dave and his family did an incredible job — they made sure everyone had a fantastic time,” said Janssen, who owns a 53-foot Outerlimits V-bottom.

Rest assured Janssen and many of the participants from last weekend’s “Friends Without Borders” gathering are going to return next year.

“As we’ve learned the past several years, life is too short, so I just want to enjoy it with good people,” Scotto added. “We definitely couldn’t have done this without all of our friends and family who chipped to help organize this thing. I’ve met so many amazing people — Americans, Canadians and more — from doing poker runs over the past seven or eight years that I just want to continue to have fun with everyone.”

Amongst those friends he’s met through his commitment to boating, Scotto is known for being overly gracious. That’s why I know for a fact he won’t have a problem finding a ride on someone’s boat at pretty much any event he attends this season. After all, he’s not going to have a boat this season—he currently has a new 50-foot Outerlimits on order—so he might have to lean on those friends a little more than he’s used to this summer. Good thing he threw one of the coolest—literally—parties of the year.