You are at:Home»Awesome»Bring On The Lake Of The Ozarks

Last weekend at the Race World Offshore event in Dunkirk, N.Y., the Performance Boat Center and CR Racing teams stole the show with victories in their respective classes. That both outfits are based in Central Missouri comes as little surprise. At this point, it’s safe to say the Lake of the Ozarks area—and both teams call it home—is the epicenter of the performance-boating universe.

And much of the credit for that goes to the Lake of the Ozarks Shootout, which celebrates its 30th anniversary this week, and the concurrently running Super Cat Fest at the Camden On The Lake Resort. While one is a top speed competition and the other is a hardware exhibition, both event should top your list if performance boats are of even marginal interest to you. 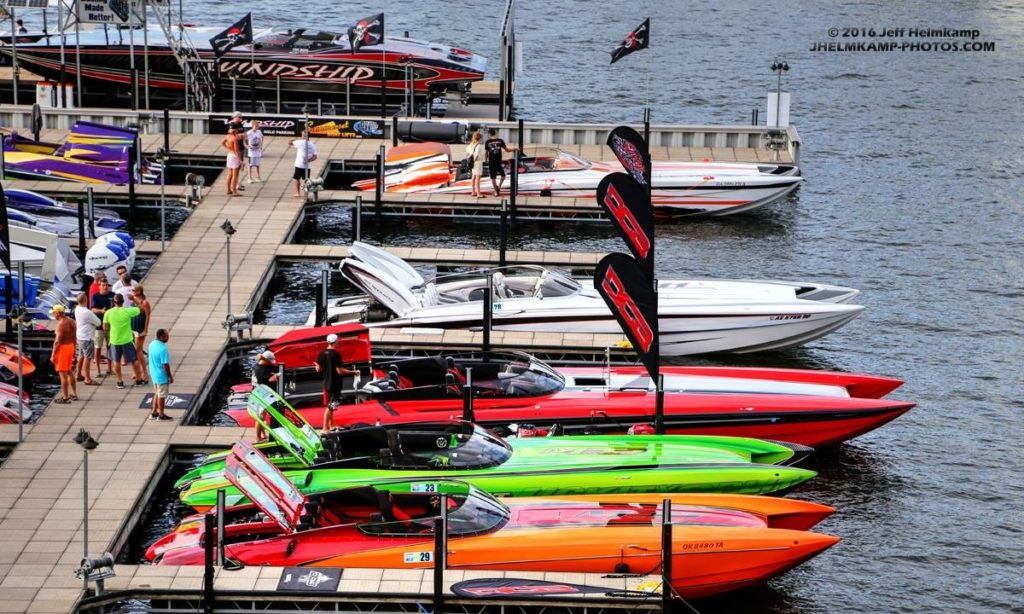 On the Shootout side, you have to love the return of Factory Billet, a 51-foot canopied Outerlimits that traded blows with an open-cockpit 43-foot Black Thunder for V-bottom supremacy. That the battle ended in a 161-mph gentlemen’s agreement/tie doesn’t mean that the Factory Billet team of Jim Schultz and Mike Faucher won’t be trying to raise the bar this year.

As for the father-and-son Black Thunder duo of Dennis and Jason Parvey, the younger Parvey has said that while they’ll be there for his father’s Shootout Hall of Fame Induction and will bring the boat, they’re not necessarily committed to competing. Their plans are a grey—make that murky beige—area.

When it comes to the overall Shootout Top Gun, American Ethanol—a 51-foot Mystic Powerboats catamaran loaded with 9,000-hp worth of engines and once-again sponsored by Big Thunder Marine—likely will be competing with itself. Mystic company owner and American Ethanol throttleman John Cosker said he was “just learning” the new three-quarter-mile course last year, and the boat still reached 204 mph.

Will the 2017 Lake of the Ozarks Overall Shootout Top Gun American Ethanol raise the bar on itself this year? Photo by Pete Boden/Shoot 2 Thrill Pix

Who wants to bet they top 210 mph this year? Loser buys drinks at the annual Performance Boat Center party this year.

Oh wait, that’s Thursday night and the Shootout doesn’t start until Saturday morning. Well then, we can argue about it over drinks at the Performance Boat Center bash, then forget about it, raise our glasses and watch the dealership’s incredible fireworks display.

While Super Cat Fest technically starts Friday, go-fast boats from the likes of DCB, Mystic, Skater and more will start rolling in Thursday. Included in the fleet will be a slew of Mercury Racing Verado 400R outboard engine-powered sport catamarans showing up for the first Speedonthewater.com sport cat roundup. A dream team of test drivers, Bob Teague, Grant Bruggemann and Shaun Torrente (yeah, that Shaun Torrente) will be putting the 28- to 38-footers through their paces.

And that’s the light hardware. DCB will have its usual fleet of wicked M35 cats and more, Mystic will have eight offerings—representing every model the DeLand, Fla., company builds—and Skater Powerboats, well, will fill the docks with some of the most exotic custom catamarans in existence.

Without question, it’s going to be a great week at the Lake of the Ozarks. And if you can get there, you should get there.