You are at:Home»Awesome»Bring On The Money 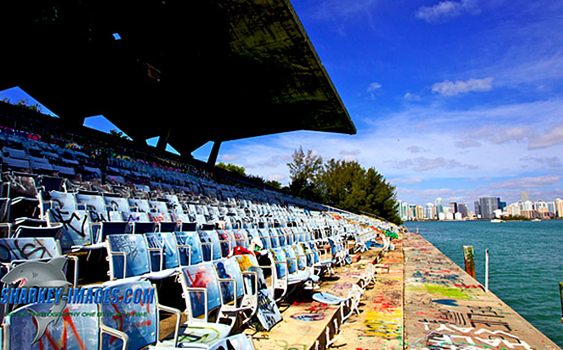 Since being shuttered more than 20 years ago, Miami Marine Stadium has become a graffiti-covered structure. (Photo by Tim Sharkey/Sharkey-Images.com.)

Donald Worth and his friends can finally exhale—well at least for the short term. It’s been nearly six years since Worth and the Friends of Miami Marine Stadium (FMMS) decided to launch a campaign to bring back the South Florida landmark. But after a 4-to-1 vote by the Miami City Commission in mid-July, control over the site surrounding the long-shuttered stadium has been turned over to FMMS—and the community couldn’t be more excited.

Miami Mayor Tomás Regalado summed it up best moments after the vote: “Today we right a wrong that has been there 20 years.”

Closed since 1992 after being damaged by Hurricane Andrew, the 6,566-seat stadium was built in 1962 by architect Hilario Candela and has played host to many boat races over the years. According to Worth, who said FMMS already has commitments for $10 million of the nearly $40 million the stadium and an endowment is expected to cost, now it’s time to start raising the funds to restore, expand and re-open the stadium as well as the surrounding area on Virginia Key. 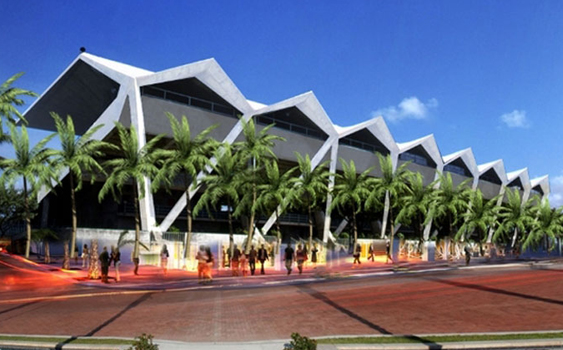 This rendering, along with many others by Arseni Varabyeu, is part of the gallery section of www.marinestadium.org.

“We’re really pleased to have this decision behind us so we can concentrate on fundraising,” Worth said. “Dealing with political issues for the last five and a half years has been a challenging process. We are delighted to not only get such a positive vote but also to come out of it with such momentum. We’ll be moving forward with a lot of enthusiasm.”

Worth also was energized about receiving support from the “most powerful business association in Miami,” the Greater Miami Chamber of Commerce, which produced this video showcasing the joy reflected by Candela and University of Miami architecture professor Jorge Hernandez on the day of the city commissioners’ vote.

“Initially, as we begin the fundraising campaign, we’ll be trying to get major commitments from a small number of individuals or corporations,” Worth said. “We’ll be approaching businesses for naming rights as well as hiring experts to help with the efforts. After that, the general public will be able to contribute.” 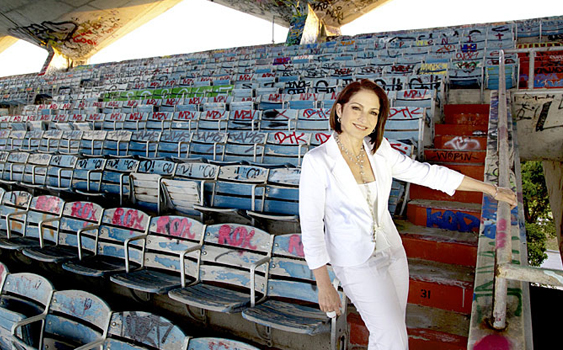 Grammy-winning musician Gloria Estefan has shown her support for the National Trust and Friends of Miami Marine Stadium’s ongoing efforts by appearing in public service announcements.

In the meantime, Worth encourages anyone to join the cause by signing up for the FMMS email list and sending him any thoughts or ideas. He also added that he’s looking to borrow any stadium-related materials for an exhibit at the Coral Gables Museum this fall called “Concrete Paradise.” According to Worth, any items borrowed will be subject to a loan agreement and will be returned after the exhibit. 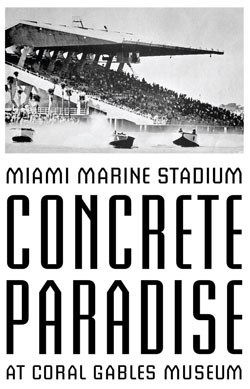 The stadium’s past, present and future will be a featured exhibit at the Coral Gables Museum this fall.

With boat racing playing a prominent role in the multi-media exhibit, which opens October 17 and runs through the end of December, Art and Architecture Conservator Rosa Lowinger and Preservationist Megan Schmitt will curate the show.

Schmitt noted that the show will be very visual, as reflected through vintage photographs, film clips, antique hydroplanes, site-specific graffiti murals, future renderings and much more. “The Marine Stadium is like a beautiful woman that just can’t take a bad picture,” Schmitt said.

The overall plan reaches beyond that of the stadium design—it’s about creating an activity place that gives people a reason to come visit Virginia Key. Along with shopping and food vendors, one possible attraction will be the Antique Boat Museum, a South Florida version of the premier freshwater nautical museum in Clayton, N.Y.

Aiming not just to restore the marine stadium but also to create a place to connect people to the water, Worth said the satellite museum would be an important element to do just that.

“We definitely have some challenges ahead, but we’re more optimistic than ever,” Worth said. “We spent five and a half years waiting to get the opportunity to do this—now that we have it, we have to follow through.”