You are at:Home»Awesome»Celebrating Joey Gratton 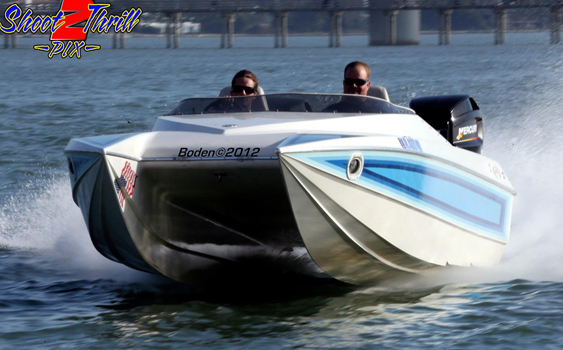 Boats of all shapes and sizes will show up on New Year’s Day to celebrate the life of Joey Gratton. (Photo by Pete Boden/Shoot 2 Thrill Pix.)

Are you tired of reading about death? Good—because I’m sick of writing about it. Like you, I’ll be happy to kick this tragic year in our little world to the curb and wrap my arms around the next one.

And what better way to do that than with a real celebration of life? That’s exactly what will happen on January 1, 2015, when friends and family of Joey Gratton come together in Sarasota, Fla., for a New Year’s Day Fun Run in his honor.

A well-known and respected offshore racer, Gratton drowned after the catamaran he was throttling rolled during the 2011 Super Boat International Offshore World Championships in Key West, Fla. Among those devastated by the loss of Gratton was his close friend and fellow offshore racer Ryan Beckley. So with permission from the Gratton family, Beckley’s annual New Year’s Day Fun Run became the Joey Gratton Memorial Fun Run.

“It was started more than 10 years ago by two friends with nothing to do on New Year’s Day,” said Beckley. “There are no entry fees, no cards and no prizes, just good friends, pretty boats and great times.” 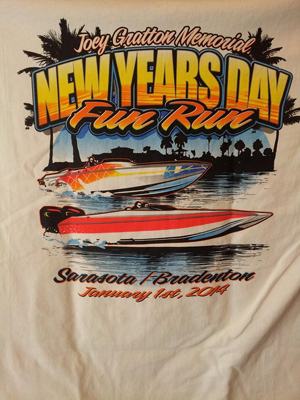 A fine way to begin the New Year, the tradition will continue.

Beckley said he is expecting 50 to 100 boats—a fleet most serious poker run organizers would be delighted with—this year. From center-console fishing boats less than 20 feet long to full-time 40-foot offshore raceboats, you name it and you’ll likely find it on the run. You’ll also find Priscilla Gratton, Joey Gratton’s widow, and their twin sons Blake and Brock.

“Joey’s family makes it every year to honor his memory,” said Beckley. “Race teams and crews, family and friends from across the country and around the world make it every year. Everyone is welcome—any size boat. They can even come by car or motorcycle.

“This year Brock and Blake will run their own 30-foot Spectre with triple outboards for the first time,” he added.

The event starts in Sarasota Bay, winds its way into Tampa Bay and then runs up the Manatee River to the Tarpon Pointe Grill for a lunch celebration. It’s not a long haul, but it’s a good one, especially for those who might need a little fresh air the day after ringing in the New Year.

So on the first day of 2015, Joey Gratton, an offshore racer dearly loved and sorely missed by so many of his fellow competitors will be honored by his family and friends—a perfect way to start the New Year.

Because it celebrates life, and we could all use a bit of that as we flip the calendar on the last one.