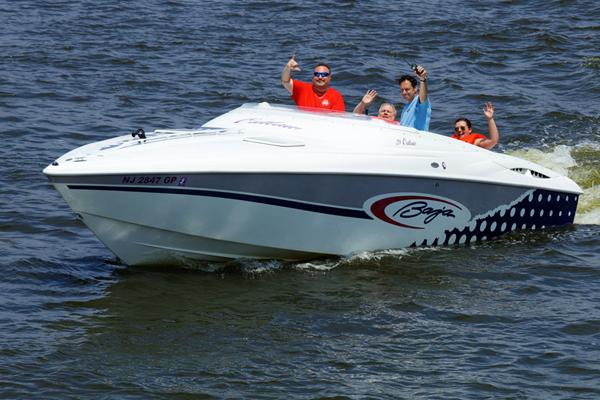 Less than 24 hours after taking delivery of his 29-foot Baja sportboat, Mike Jurusz had it on the water for the first—giving rides to the participants of Shore Dreams For Kids. Photo by Tim Sharkey/Sharkey Images

Set just behind the unspoiled, gentle dunes of south Seaside Park, N.J., Chef Mike’s ABG restaurant has an intoxicating view of the Atlantic Ocean. And no one is more captivated by it than Mike Jurusz, the fine-dining venue’s owner and namesake.

“From my ‘office,’ I watch boats go by all day long,” said Jurusz, a former offshore powerboat racer who’s been cooking professionally for more than 30 years and bought the waterfront restaurant 10 years ago. “Sometimes I find myself day-dreaming when I watch the performance boats—I’m a performance-boat guy at heart—going by. I get chills. I feel the need to be on the water.

“That why I have an oceanfront restaurant,” he added. “So I can look out at the water and watch the boats go by.”

Last Friday, Jurusz took delivery of his latest boat, a 2001 Baja 29’ Outlaw powered by MerCruiser 350 Magnum engines, from Campisano Marine Center in Brick, N.J. He took delivery of the 29-footer, which he’s keeping at nearby Coty Marine in Toms River under the watchful eyes of his longtime friend and New Jersey Performance Powerboat Club president Dave Patnaude.

Jurusz got the boat just in time to participate in last Saturday’s annual Shore Dreams For Kids event, which provides a day of powerboat rides, food and carnival fun for mentally and physically challenged children and adults, as well as their families.

Though it was Jurusz’s eighth time giving rides to the participants of Shore Dreams, it was his first time providing them in a performance boat. In years past, he’s given rides in whatever cruiser or runabout he happened to own. But as it turned out, his first time behind the wheel of his 29-footer happened Saturday morning as he idled to docks in Seaside Heights, N.J., to pick up his first load of Shore Dreams passengers.

And he couldn’t have asked for a better maiden voyage in his new toy.

“I raise about a half-million dollars for charity every year, and this is by far my favorite one,” said Jurusz, who gave rides to eight groups on Saturday. “First, I’m doing what I love to do—boating is my passion. Second, I get to take these very special children for rides. I get to see the joy they get from something they look forward to all year long. Putting smiles on the kids’ faces, that’s the best part. It’s priceless. You can’t buy that feeling.

“The first thing I ask the kids when they get on board is whether they want to go slow, medium or fast—and they almost always want to go fast,” he continued. “Bob Christie, who’s another great friend of mine, was working as the ‘dockmaster’ and he had the kids organized very well. Another good friend, Bernie Neuhaus, was giving rides in a pontoon boat that could hold 18 people. We’re a very close group here.”

At the end of the Shore Dreams day, Jurusz provided a meal to all the volunteers—and everyone involved from the incredible event’s dedicated board of directors to its boat drivers and dock crew and field workers is a volunteer—who helped make the event happen. Exceptional by all accounts, Jurusz’s end-of-day meal for the group has become a Shore Dreams tradition.

Jurusz paused for a moment, then chuckled softly. “I’m very fortunate,” he said. “I have a restaurant on the ocean.”