You are at:Home»Awesome»Cumberland’s Fresh Start 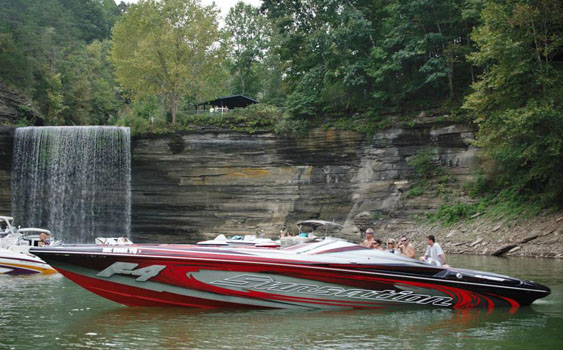 Running his F-4 43-foot V-bottom from Sunsation Powerboats, Steve Dungy took a close look at the beautiful 76 Falls during the Lake Cumberland Poker Run in Kentucky. (Photo by Joe Schaldenbrand.)

From the sound of things (I wasn’t there), the revamped two-day Lake Cumberland Poker Run—featuring no official start—went smoothly and made the longstanding event more enjoyable for many who joined the fun last weekend.

With nine marinas along the Kentucky lake handing out cards on Friday and Saturday this year, boaters needed to make it to at least five of the stops to participate in Saturday night’s poker run draw at State Dock, the event’s host location. So without a drivers’ meeting or a shotgun start on Saturday morning, the event morphed into a more casual affair with boaters using much of their time to raft-up, hang out and take in the sights and sounds from the beautiful 76 Falls to the legendary party cove at the Harmon Creek section of the lake.

According to Joe Schaldenbrand, one of the owners of Sunsation Powerboats who has attended the event many times, the poker run was more relaxed this year.

Louisiana’s Nate Michel did the poker run in his Outerlimits V-bottom Remote Access and had a great time. (Photo by Angela Goldbaugh.)

“I think I enjoyed the run this year more than I have any other year,” said Schaldenbrand, who rented a houseboat for the weekend right across from the entertainment stage at State Dock. “On Saturday, we told a dozen or so Sunsation customers that we’d meet at the falls so we all migrated down to 76 Falls, rafted off for a bit then we went to party cove and just hung out for the day. It was cool to see a pack of Sunsations together. In fact, every model we build was there—we had a 28, 32, 36, 43 and our 29 and 34 center consoles. That’s never happened before so that was pretty neat.

“I think a lot of friendships were made, too,” he continued. “Everybody really gets to know one another when you raft up with like-minded boaters. From a marketing standpoint, the overall exposure was better. Everything was just more relaxed—you never felt like you had to hurry up and get anywhere, which was nice.”

Enjoying the company of friends was exactly what Kentucky performance boater Mike Thornton did throughout the long weekend. Thornton, who owns the 388 Skater Powerboats catamaran Frisky Business, was part of a group that had a dedicated houseboat just for party cove. 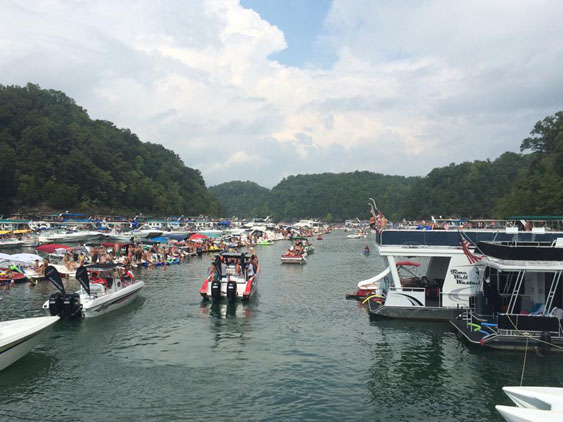 The Harmon Creek section of Kentucky’s Lake Cumberland is known as Party Cove and it was easy to see why during the poker run. (Photo by Celeste Segredo.)

“I was impressed with the caliber of boats this year,” said Thornton, who would love to see a top-speed shootout added to the event and encourages anyone who would participate to contact Bill Jasper and the organizers at State Dock. “There were boats like mine and Bill’s [Pyburn, who also owns a 388 Skater] that like big speeds and guys in 22-foot Baja sportboats and everything in between. I wasn’t sure how the format change would work, and although we lost the big spectator gathering for the start, everyone had a great time. The dock parties were fantastic and of course Harmon Creek was…Harmon Creek.”

Anthony Reece, who owns the 42-foot Statement Marine V-bottom Saddle Up and is a regular participant in the event, had a great time but said it didn’t feel like a poker run to him.

“Overall it was different because of the start situation,” Reece said. “There wasn’t much communication letting people know what was happening. Besides the evening parties, not much else was planned. I preferred the previous format. I understand there are safety and liability concerns in having a start, but I’d really like to see the spectator aspect return in some way or another. Harmon Creek is great, but a lot of those people aren’t even signed up for the poker run.”

Surely organizers will take a closer look at the new format and determine what worked and what didn’t and make improvements for next year. Poker runs don’t stick around for 20 plus years without some sort of reinvention.