You are at:Home»Awesome»Desert Bloom On Tap For Reborn Tommy Bahama

Loyal readers of this column are up to speed on the restoration of Tommy Bahama, a canopied MTI catamaran that captured a legion of offshore racing fans in the late 1990s and early 2000s. Earlier this year, I wrote about the rebirth of the 44-footer, which original owner Mark Nemschoff had converted for pleasure use, after he and his son, Paul, retired from racing. During the latter part of 2018 and much of 2019, Tom Mischke, the Arizona-based new owner of the cat, had the boat completely restored. He even had Sterling Performance Engines supply fresh horses, some 1,600 hp worth, for the project.

As typically happens with meticulous high-performance powerboat restorations, the process took a bit longer than the owner anticipated. Mischke wasn’t 100-percent certain it would be ready for its planned debut during the 2020 Desert Storm Poker Run set for April 22-26. But now he is and the boat will be there. 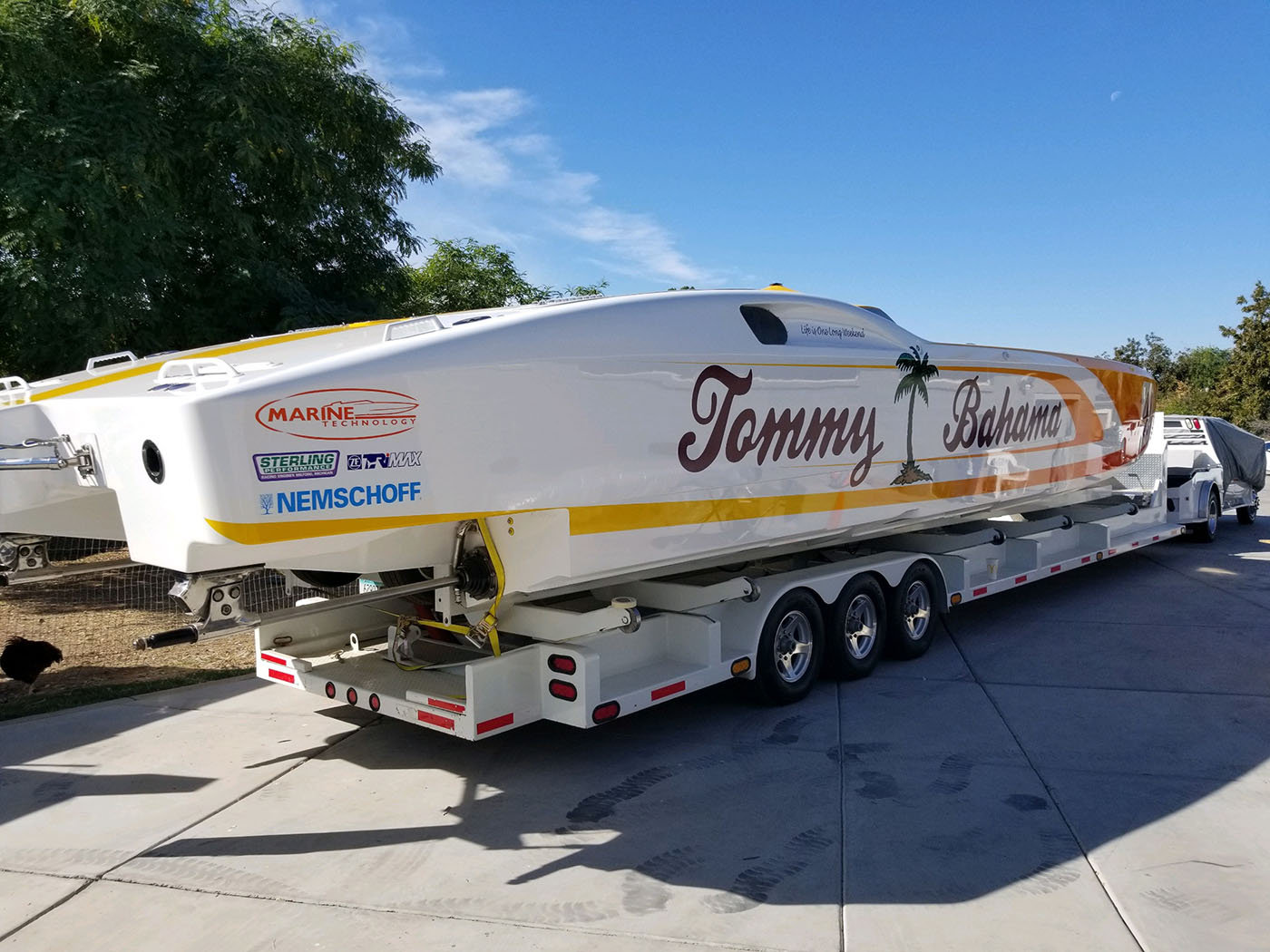 Ready for its Desert Storm debut, the restoration of Tommy Bahama has been a labor of love for owner Tom Mischke.

Better still, at least for me? I’ll be going for a long ride—at least I hope it’s a long one—with him on Wednesday that week in Lake Havasu City, Ariz. And, OK, I confess that I have never looked more forward to a Desert Storm happening.

The last time I saw Tommy Bahama MTI in action was in the early 2000s when it was tangling, to put it politely as there was no love lost between the two teams, with the Hidden Agenda Skater cat. But though I crawled all over the boat when I spent the better part of a race-week with the Tommy Bahama crew in Key West, Fla., I’ve never ridden in it. That will change in April. (Those who don’t have my incredible good-fortune can catch the boat during the Desert Storm Street Party on Thursday.)

“She is all shined up and ready,” Mischke told me yesterday via text message. “I will make it available wherever and whenever you want.”

Music to a go-fast boating writer’s ears, right? Better still, that means we can run the boat for water-level photography on Wednesday and aerial photography on Friday. The only bummer is it doesn’t look like either of the Nemschoffs will join us in Tommy Bahama’s cockpit. And that would have been fitting.

“Mark currently has a schedule conflict, but he is trying to be there,” said Mischke. “ Paul is going to be out of the country on business so he cannot make it.”

But even without the father-and-son who made it famous, the Tommy Bahama catamaran will be a head-turner on the Colorado River next month.