You are at:Home»Awesome»Father And Son Conquer the OPA Worlds: Part II 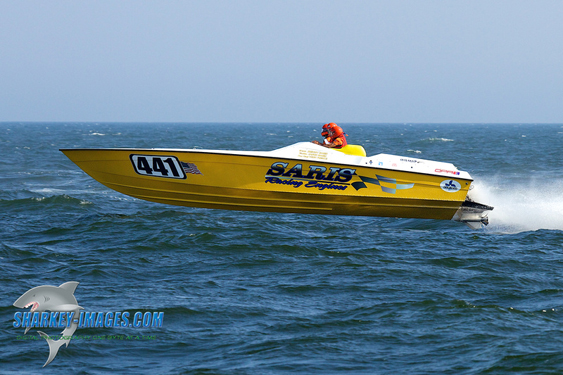 Saris Racing Engines on its way to a world title in Ocean City, Md.

As a rule, running a new offshore raceboat in its first event with zero testing time is not a great recipe for success. But that’s exactly what Jason Saris and his son, Johnny, did this season with their restored 30-foot Cobra raceboat, powered by twin 650-hp engines they built, at the Offshore Powerboat Association race in Atlantic City in June.

“We working on it until the very last second,” said Jason Saris, the 56-year-old of Performance Marine, a full service center, engine builder and Skater catamaran dealer in Bolton Landing, N.Y. “We put it in the water, just to make sure it would get on plane. We finished it up and literally left for Atlantic City.”

Dubbed Saris Racing Engines, the boat did better than get on plane—it took first place in the Class 400 field. The father-and-son, throttleman-and-driver team followed up that win with a second-place finish at the OPA race in Long Beach, N.Y., and a victory at the Solomons, Md., race, the organization’s National Championships.

And then came the icing on the cake—an OPA World Championship in Ocean City, Md., earlier this month.

“We had a phenomenal season,” said Jason Saris.

For Saris Racing, the journey to a world title started four years ago when Jason and Johnny converted their 27-foot Avanti pleasure boat to an “offshore raceboat.” By the time their first race was over the boat’s cabin door was destroyed, and they knew they’d need a new—at least to them—raceboat the following year. 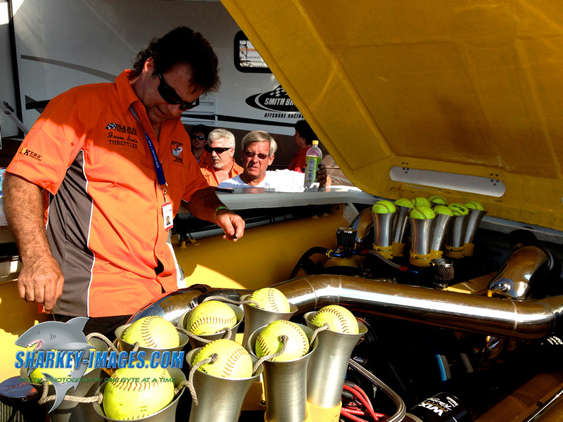 While Jason Saris (shown here in Ocean City) has been racing offshore powerboats since the early 1980s, the highlight of his career is running with his son, Johnny.

Their next ride came in the form of a 29-foot Kryptonite V-bottom, which they raced for two seasons while they completely gutted their 30-foot Cobra, a boat that Jason had helped build when he was working for noted throttleman Keith Hazell of Harbor One Marine in Fort Lauderdale, Fla., during the early 1980s.

Johnny Saris actually found the boat through the offshoreonly.com classified ads, and told his father about it. “He told me, ‘Don’t even call about it, we can’t afford it right now,’” said Johnny. “But things changed.”

“It was laying at a marina in Maryland, all taken apart by someone who was going to redo it but never did,” said Jason. “We ended up buying it and putting it back together.”

By the accounts of both Jason and Johnny Saris, “putting it back together” was an understatement. “The restoration pretty much took 2-1/2 years,” he said. We even had to replace the stringers. I like to tease my dad and tell him it’s his fault the stringers broke out, since he built it.”

Truth be told, Johnny, who is in his junior year of a double major in economics and music at the State University of New York in Albany—the father-and-son duo play guitar in the same band—does more listening than telling, at least when it comes to his father on the subject of go-fast powerboats and offshore racing. That’s because his father has a serious resume, one than includes working closely with Hazell, who throttled for big-name owners/drivers such as Tom Gentry, and driving for Bob Sheer, another hot throttleman of his era, in the Sheer Terror, a 30-foot Flight Marine catamaran that raced in Modified class and vied for class supremacy with the Shadow Cat raceboats. Along the way—Saris worked in Fort Lauderdale from 1980 to 1987 before buying his service business in Bolton Landing with his business partner Rick Gauge—he got to know industry legends including Don Aronow, Betty Cook and Rich Luhrs.

But his best offshore racing experiences have come in the cockpit with his son. The two men started running together when Johnny was 16 years old.

“I always knew that he wanted to race,” said Jason. “When my son turned 16 and became eligible for his driver’s license, I sent an email to [OPA president] Ed Smith, and said, ‘You know, it’s a shame we have to wait two more years for him to race. Ed said, ‘We’ve changed that. As long as he’s running with a parent or legal guardian he can be 16.’”

Johnny came in with all the unwarranted confidence of a typical 16-year-old boy. That lasted less than one race.

“I had been around fast boats all my life—we’re a Skater dealer—and I grew up in fast boats,” he said. “I remember my dad telling me that it was going to be a lot to handle, and I was like, ‘Dad, I got it.’ He was right. I had no idea.”

Learning to work together as a team took time. In that first race, they broke out of their 85-mph speed-bracketed class 48 times. But that was four years ago. Clearly, they’ve figured out a few things, as evidenced by their impressive 2014 season and world championship.

“You learn from your mistakes,” said Jason. “Eventually, we managed to win a few and get up on the podium. I have been racing since 1982, and there is nobody I’d rather have in the boat racing with me than him. I think he’s the best driver out there.”

“He knows better than to say that around me,” Johnny said, then laughed. “We have our tense moments—we don’t race with intercoms so we punch each other in the arms all the time. We’re so alike. Neither of us wants to stand down. I’m usually wrong, but we’re both very stubborn, very hotheaded. But you argue and then you get over it.

“It’s awesome racing with someone who has done it as long as [he has],” he continued. “The only downside is for my mom, because the two people in her life that matter most to her are out on the racecourse at the same time. She can’t watch the races. She’ll go to the beach but she just looks at the hotels.”

Added Jason, “It’s just been the best experience. I’m really blessed. We get to race together, and the quality time starts when we get in the truck and start driving.”