You are at:Home»Awesome»Giving Thanks the Offshore Way 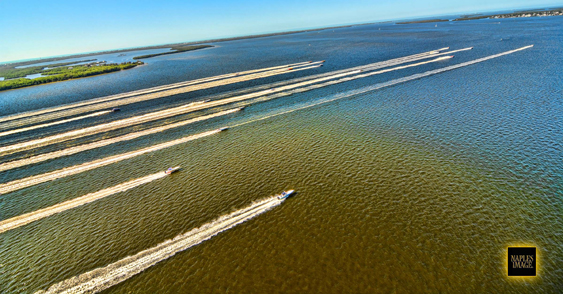 What did you do the Saturday after Thanksgiving? If the answer comes back “shoveled snow,” “watched college football” or even—heaven help you—“went shopping at the mall,” you’re certainly not alone. In most parts of country, folks winterized and safely stored their go-fast boats a couple of months ago and—at least until spring—have shifted their attention to other things.

But the west coast of Florida is not most parts of the country, and November and December can be flat-out spectacular for a day on the water there, which is why the Fort Myers Offshore club’s annual Thanksgiving Fun Run last Saturday attracted 30 boats and more than 100 people. In the process, the run raised $3,500 for the nonprofit group’s student scholarship.

“It was totally awesome,” said Bob Barnhart, one of the club’s founders, who tackled the run in his twin-outboard 32-foot Renegade center console, one of six Renegade models in the run. “One of the interesting things is that 10 of the 30 boats belonged to new members doing their first run with the club. So we continue to attract interest, I guess. I think in part we have to thank photographer Jay Nichols [another FMO founding member]for all the pictures he takes and posts online. He gives the club such great exposure.”

Because Fort Myers Offshore has members from as far south Marco Island and Naples and as far north as Punta Gorda, their runs tend to start at the Sanibel Bridge—the closest midway point—just outside of Fort Myers. Like all the club’s runs, the post-Thanksgiving event started promptly at 11 a.m.

“We have a five-minute waiting period, then we go,” said Barnhart with a healthy laugh. “We always start on time—that’s our rule. I’ve been to many events that start easily a half-hour late. But if you’re going to run with us, you be there on time and we go.”

In the case of last weekend’s fun run, that meant heading 40-something miles north to Harpoon Harry’s in Punta Gorda for lunch. After lunch participants left at their leisure, which is another one of club’s casual traditions. Groups of boats from various areas generally left together so they could avoid having to run solo on their return legs.

Though almost one-third of the boats in this year’s run were center consoles, a number of brands including Marine Technology, Inc., Nor-Tech and Outerlimits were represented. Yet on the way to the restaurant, the group stayed relatively close together.

“We all hang together,” said Barnhart, who also owns a 50-foot Nor-Tech and a 38-foot Donzi. “The MTI was capable of outrunning the rest of the pack, but we stayed with the group.”

Last weekend’s run actually was the club’s second event of the season—its first was in October. Next up is its New Years Day Fun Run except the event does not happen on New Years Day. It’s scheduled for Saturday, December 30.

“A fun run on New Years Day can be, uh, a little tough for some of the members after New Years Eve,” said Barnhart, who laughed again. “We’d have 30 boats sign up, and then lose 10 on the day of the run. A lot of our members told us it would be easier for them to make it the Saturday after Christmas, so we changed it.

“The other thing about that date change is we don’t conflict with Ryan Beckley’s annual New Years Day Sarasota Run,” he added. “That’s the beauty of South Florida, right? Thanks to the weather, you have lots of options.”

Even in the dead of winter.