You are at:Home»Awesome»Hammer Down Rising 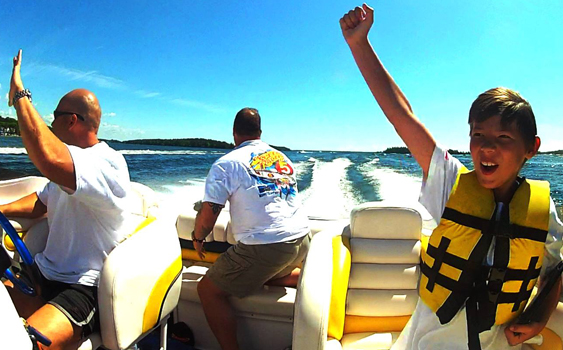 A little more than a year ago, a couple of 43-year-olds from Rochester, N.Y., bonded over their mutual love for offshore racing and started a Facebook community page called Hammer Down Boating. And what has evolved from the vision of George Tobin and Rodney Olson has become—with close to 3,000 unpaid-for “Likes” (yes, you can buy them)—the ultimate fan page where visitors can interact with both the stars and everyday people in the sport.

“This isn’t ‘work’ for us,” says Tobin. “It’s not our full-time job. It’s just part-time fun. Anyone can come here and post and interact with the offshore racers. Facebook has really enabled that to happen.”

Olson agrees. “It’s just a blast,” he says. “You can get burned out on Facebook anyway. This is more fun.”

Of course, there’s more to the back story of Hammer Down Boating. A month or so before the site launched, Olson, an aspiring amateur photographer who works as a manger for a sheet metal fabrication plant, was looking for a boat to shoot for a poker run in Alexandria Bay, which has borders in the United States and Canada. Through Facebook, Tobin offered his 26-foot Donzi sportboat and the two, along with Tobin’s now 10-year-old son, A.J. (he was nine at the time), became fast friends. Next thing they knew they were off to catch offshore races in New York City and nearby Long Island before heading south for the July 4 weekend race in Sarasota, Fla. Hammer Down Boating was born soon after.

“The power of a boat going by you at 160 mph, you can feel it in your body,” says Olson. “It’s exciting. It’s like nothing else. 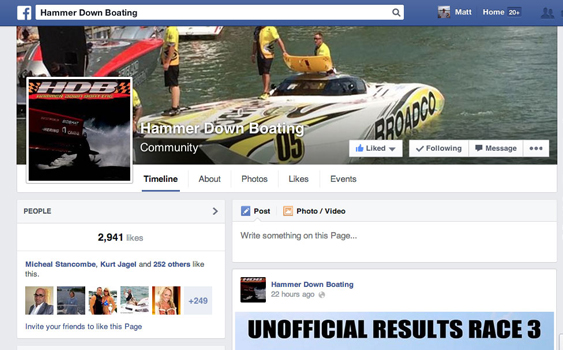 For offshore racing fans online, Hammer Down Boating has become a popular stop.

As offshore fans, Olson, who works in manufacturing, and Tobin were frustrated by the lack of real-time information available after each race. So, part of their mission became getting results as soon as humanly possible on Hammer Down Boating after each event—and not just those of the “big name” teams, but also those of everyday Production-class racers. Each man estimates that he puts 15 to 20 hours a week into the site and they divide the work evenly. (A.J. Tobin also contributes regularly.)

Interviews are a key element of Hammer Down Boating’s editorial content, and they reflect the site’s commitment to total coverage.

Tobin handles most of the work, which Hammer Down Boating augments with contributions from noted high-performance boat/offshore racing photographers including Pete Boden and Jim Winters. Tobin says he talks frequently with Winters and Boden, as well as established photographers Tim Sharkey and Ken Miller, to try to glean all of the knowledge he can on his relatively newfound craft.

While Hammer Down Boating remains primarily focused on offshore racing, Tobin and Olson say they are gradually expanding their reach to the pleasure boating side of the market, meaning poker run coverage. They’re hoping that the interactive nature of their Facebook page will translate as well as it has with the poker run segment of the market. After all, they first started working together at a poker run and they already have a proven formula for success—simply picking up the phone.

“This all started with us reaching out,” says Olson. “At first, people were like, ‘Who the hell are you?’ Now they send us information. It’s kind of cool it’s gone the other way.”