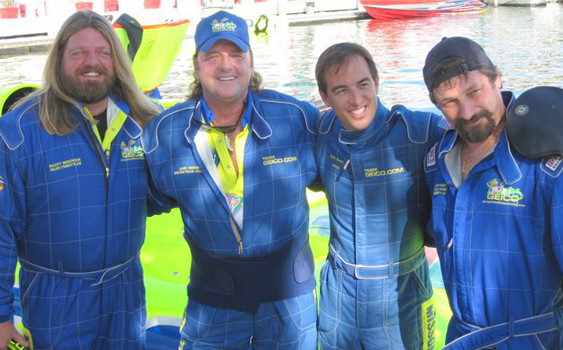 Here are four fun facts about Scott Begovich, the throttleman for all the Miss GEICO catamarans since the team took form under the AMF Offshore Racing banner in 2005.

1. The first catamaran he ever rode in—and throttled—was the team’s 40-foot Platinum with turbine power.

3. Thanks to an ash-filled urn duct-taped inside the Miss GEICO cockpit, he has raced with, so to speak, his father, John, in every event the team has entered since he died in 2009. (Says, Begovich, “We use duct tape to hold the urn in place because my dad would have liked it that way.”)

4. He paid off the loan for his first offshore raceboat, which he bought almost 13 years ago, earlier this month.

You know the Miss GEICO Offshore Racing team, of course, primarily through its driver Marc Granet. By design, genetic predisposition and more than a little bit of natural selection, Granet is the team’s front man—and both Granet and Begovich like it that way. Sure, Granet enjoys the spotlight. But he also is well suited—far more than Begovich—to the heat that comes with it.

“Marc is our prima donna,” says Stray. “Scott is our Teddy Bear. They’re perfect together.”

Says Begovich, “Marc is a phenomenal driver. He talks a little too much, but he’s the best driver in the world. I am comfortable putting him into everything out there. Say what you want about him, there’s nobody better than Marc.”

He is equally complimentary of Stray. “Gary Stray is like a set-up savant,” says Begovich. “I come in and say the boat is doing this or that and he knows exactly what to do. I tell him what I like or what I don’t like and then I forget about it. When I get back in the boat it’s exactly the way I want it. He respects what I tell him, takes the information I give him and applies it.” 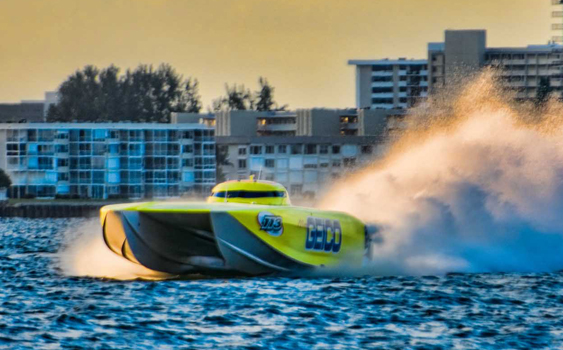 Begovich on the Miss GEICO with its new power: “From 70 to 150 mph it has every bit of the acceleration—if not more—the turbine boat had.” (Photo by Jay Nichols.)

Begovich grew up in Brick, N.J., and for as long as he can remember he dreamed about being an offshore racer. His father was the dock master for the Kings Grant Inn in Point Pleasant, home of the famed Benihana Offshore Grand Prix, and Begovich and his brother used to pretend they were battling it out with the likes of star offshore racers Rocky Aoki and Betty Cook in their 14-foot wooden skiff.

“My dad and my uncles raced offshore,” says Begovich, the throttleman for all of the Miss GEICO offshore raceboats since the team took form in 2005. “All of my cousins raced offshore. Growing up, I would ride my bike to the marina every day. When the races came to town, it was like Christmas for me.”

In 2000, he realized his dream of owning and campaigning an offshore raceboat when he purchased a 24-foot Pantera that he ran primarily in P-class competition. In 2004, he met John Haggin at the American Power Boat Associations annual meeting in Atlanta. Haggin was pushing for APBA to adopt a Turbine class. Begovich was game to help him get the class started. The two became fast friends and eventually Begovich was driving Haggin’s 51-foot turbine-powered Outerlimits V-bottom in offshore races with John Arruda on the throttles.

Flash forward to present, where things have worked out nicely for the 47-year-old former executive recruiter who has lived in the Jupiter, Fla., area since 1984. He and his wife, Elizabeth, have an 11-year-old daughter, Olivia. And Begovich is the throttleman for the most coveted ride in the offshore racing world, which not long ago was outfitted with the first production pair of Mercury Racing 1650 Race engines. It is only the second piston-powered catamaran he’s ever throttled and it’s safe to say he was immediately comfortable with it.

“We haven’t put the big props on it yet and brought it up to high speeds, but from 70 to 150 mph it has every bit of the acceleration—if not more—the turbine boat had,” says Begovich. “The difference is that when I let off the throttles it slows down.”

Begovich says the team’s plan is to finish every race it starts this season and win the Super Boat International Superboat Unlimited-class World Championship in Key West, Fla., in November. Regardless of how the season plays out, however, it’s a safe bet that Begovich will enjoy the ride.

“Everybody on our team is a little nuts,” Begovich says and laughs. “They take it all way too seriously. I am more laid back. Whatever happens, happens.”

And why wouldn’t Begovich embrace that attitude? Every time he climbs into the cockpit he’s realizing his lifelong dream.

Editor’s Note: Look for an in-depth feature on Miss GEICO Offshore Racing team in the upcoming July/August issue of Speed On The Water digital magazine.