You are at:Home»Awesome»Mid-Level Outboard Power Moves 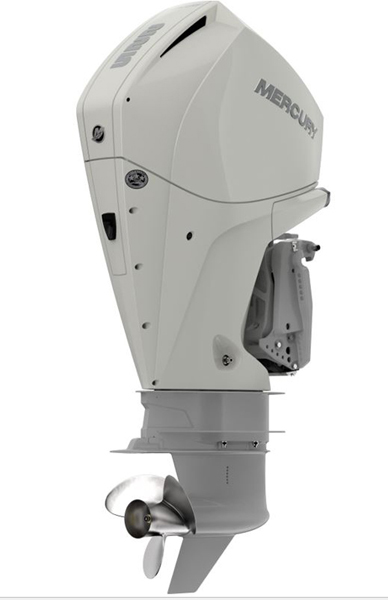 This 225-hp offering is the most powerful offering in the new V-6 FourStroke.

No one with a clue was surprised that Mercury Racing didn’t pull the sheet off a shiny new 450- to 500-hp Verado outboard engine yesterday during day one of the Miami International Boat Show. Of course, it’s possible — Verado project manager Claus Bruestle said as much when the first Verado outboard, a 200-hp offering, was introduced in 2004. But with the unprecedented and ongoing success of the Verado 400R, the folks at the Fond du Lac, Wis., outfit are in no hurry to slow the sales momentum of the most successful engine release in company history.

So buyers craving a more-powerful Verado will have to wait for something new. On the other hand, consumers looking for something a bit milder in the four-stroke, naturally aspirated category have a few fresh options, new V-6 FourStroke 175-, 200- and 225-hp outboard engine family.

According to press materials from Mercury Marine, the new Mercury FourStroke outboards are built on Mercury’s new 3.4-liter V-6 platform, which is designed to be powerful, light, compact and fuel-efficient. The new V-6 engines are “precision engineered from skeg to cowl,” the release stated.

“This new platform will position Mercury to advance product leadership in the 175-225hp outboard category, and deliver across the board on consumer needs,” said John Pfeifer, Mercury Marine president, in the release. “These new outboards address applications across recreational and commercial applications, strengthen our core product lineup by building off the success of our recent programs and delivering on the requirements of our global customers.

“These outboards set a new benchmark in the marine industry,” he added. “They are the quietest, lightest, smoothest, quickest and most fuel-efficient engines we have produced in this range.”

The new FourStroke engine not only provides large displacement at 200 hp but also is exceptionally lightweight at 475 pounds — the lightest weight in its class by more than 10 pounds, according to the release. The 3.4L V-6 FourStroke also boasts Mercury’s best acceleration and 20 percent more torque than the closest four-cylinder competitor at cruise. Fuel efficiency is excellent as the new 3.4L V-6 FourStroke is calibrated to maximize fuel economy at cruise, yielding an advantage of up to a 15 percent compared to the closest four-cylinder competitor.

Other features of the series include:

“Based on what I’m hearing from our customers, we feel like we hit a home run with the new V-6 FourStroke outboard lineup,” said Randy Caruana, Mercury Marine vice president North & Central America, and Asia Pacific, in the release. “What a great addition to the portfolio. These engines are light and quiet—to have a V-6 that’s lighter than a four-cylinder is just incredible.”

And while this new engine family isn’t quite as thrilling a more powerful Verado would have been and likely will be at some point down the road, I have to agree with him.