You are at:Home»Awesome»Offshore Rock Star 101 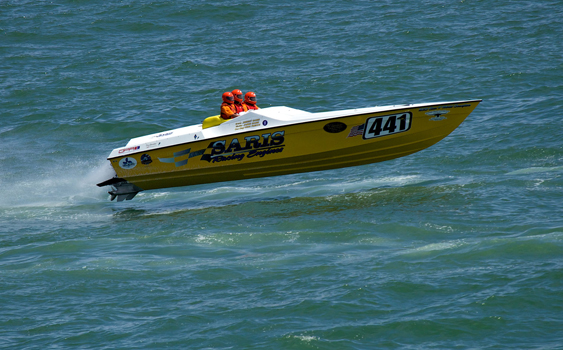 A senior at the State University of New York—Albany, 21-year-old Johnny Saris is a quadruple major. OK, well, two of his fields of study—offshore powerboat racing and playing lead guitar in a couple of bands—are decidedly “off campus.” The other two majors, music and economics, happen in more-traditional classroom settings.

Saris takes all of them seriously, which is why as I write this he is taking a nap. No, he wasn’t out fretting his fingers to the bone to the wee hours of the morning at local college-crowd nightclubs all weekend. Instead, he was in Solomons, Md., with his 58-year-old father, Jason, and Vern French, the Saris Racing Engines team navigator, earning Offshore Powerboat Association National and World titles in the organization’s single-engine V-bottom 400 Class. What’s more, it was the team’s second consecutive World Championship.

Late night guitar gigs or back-to-back days of offshore racing—both can leave a guy, even a young guy, all tired out. Hence the need for a late afternoon nap.

“We did well,” said Saris, stifling a yawn, via telephone from his dorm room yesterday. “There were two days of racing, and we finished first on the course in our class on both days. We had a good battle with Simmons racing on Saturday, and Sunday’s race was great, too.” 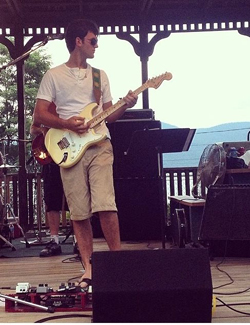 Being a rock star on and off the water is hard work—just ask Johnny Saris.

With a victory in the OPA event in Atlantic City, N.J., the 2014 season started well for the Saris team but went due south from there. Mechanical issues knocked them out of the St. Clair (Mich.) River event, as well as the subsequent Detroit race.

“We weren’t even sure if we were going to make it to Solomons,” said Saris. “My dad and Vern worked day and night at the shop [in Bolton Landing, N.Y.]—I couldn’t help much because I was in school—and got it done. We tested it one time on the lake, and away we went.

“That seems to be a theme with us,” he added.

Like all proficient players, Saris is quick to credit the other players in the band.

“With my dad throttling and me driving, it seems to get better every time,” he said. “We didn’t have to point or poke—it was like we had ESP or something. It was like we were inside each other’s heads. And I really enjoy having a navigator. I can look where I’m going without ever having to look behind me.”

“It was a good weekend for Saris Racing Engines,” he said. “And Solomons was a great event overall. We had the biggest fleet of the season and [event organizer and OPA racer]Mike Yowaiski did a great job.”

With the 2014 offshore racing season behind him, Saris has one less distraction in his life. From now until late spring 2015, he can focus learning the ins and outs of economic and music theory, and playing gigs on weekends.

But in the meantime, he just needs to get some sleep.