You are at:Home»Awesome»Out Of This World

Unlike the stickers on the boats and the cover of the 10th anniversary program handed out at the event, I’m not ready to anoint the Lake Powell Challenge hosted by Antelope Point Marina as the “world’s greatest poker run.” It definitely would get strong consideration though—and not just from me, from some extremely experienced boaters who have traveled the country participating in events. 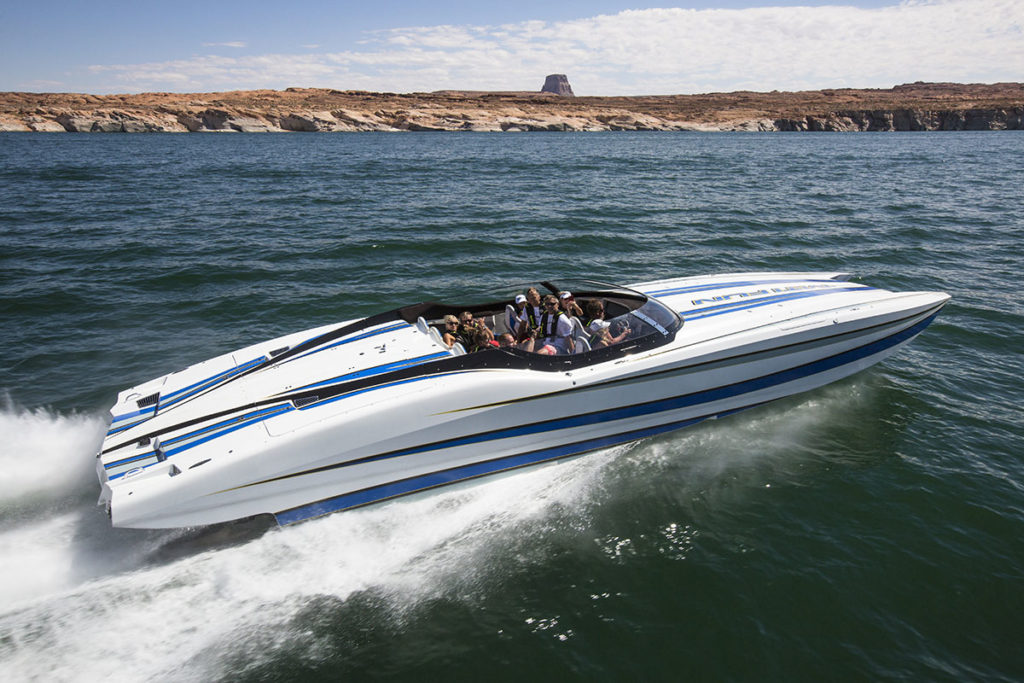 George Argyros and his crew had a blast running in MiTI Fun, his 48-foot MTI catamaran, during the 10th annual Lake Powell Challenge.

Of course I’ve been to some amazing poker runs throughout the years, and after attending the Lake Powell Challenge for the first time last weekend, it definitely takes the cake in terms of most unique terrain and the biggest fundraiser I’ve ever witnessed in person, boating or otherwise. Get this, the 10th annual event raised a mind-blowing $632,000 and change for the JDRF Mountain Valley Chapter, about $125,000 more than the year before. I’d also have to say the intimacy of it all was different thanks to pretty much everything taking place at Antelope Point Marina in Page, Ariz., and almost all of the participants staying on site in houseboats. 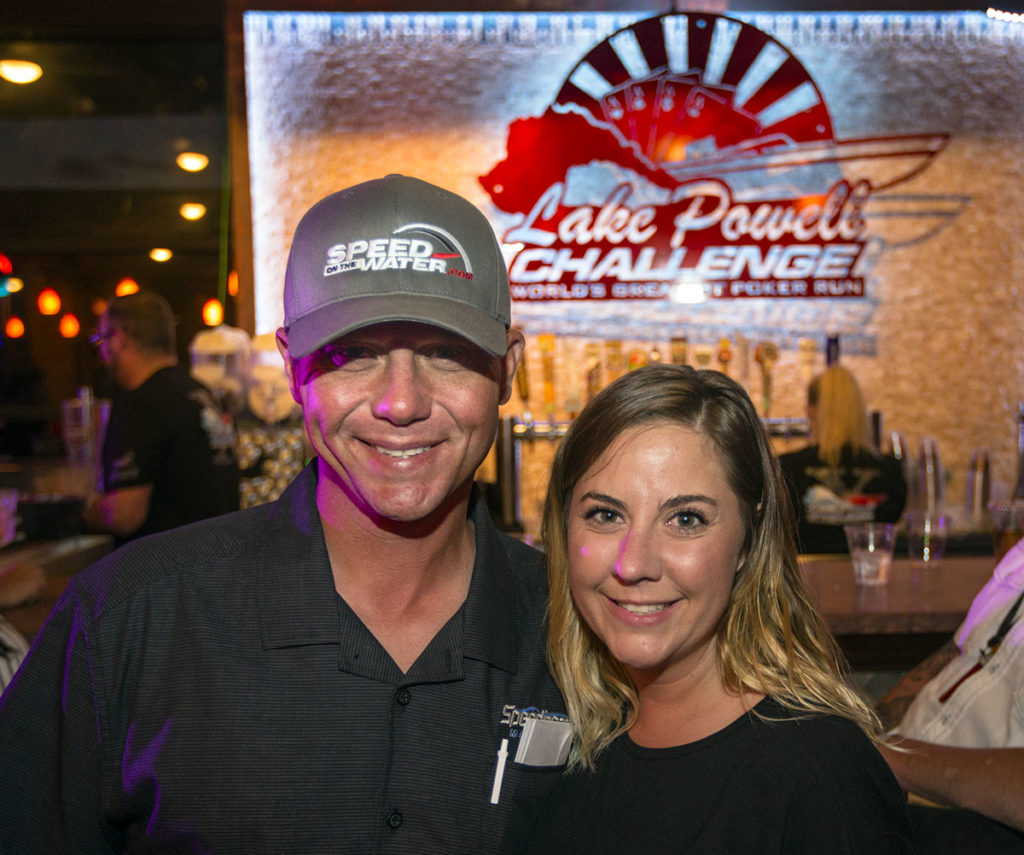 Antelope Point Marina’s Burl Griswold and Megan Bobroski are the two primary organizers of the massive fundraiser in Page, Ariz.

There are definitely “locals,” those folks who live in Page or own a houseboat at the marina and frequent the beautiful Colorado River-fed lake that is located primarily in southern Utah on a regular basis. Participants such as George Argyros, who owns the MiTI Fun 48-foot catamaran from MTI, Darren Housel, who owns a 42-foot Fountain Powerboats V-bottom, Mark Schouten, who owns the El Gato Patrón 43-foot MTI, and Mike Stevenson, who owns the stunning white and black M44 Widebody from DCB Performance Boats. But there were just as many first-time participants from different parts of the country because, as Argyros explained to me, “the word of mouth continues to spread that this is a good, clean, fun event with camaraderie and scenery unlike any other poker run in the country.”

Owners of an MTI 340X powered by twin Mercury Racing Verado 400R engines, Bob and Madelyn Christie from New Jersey were first-timers as were Gary Colledge, who brought his 38-foot canopied Skater Powerboats cat to the event from Northern California, and John O’Neill, the veteran performance boater from Georgia who currently owns a MTI 340X and a 39-foot Nor-Tech center console but caught rides with Arizona’s Mark and Jennifer Schouten and MTI-V 42 owners Greg and Brenda McCauley of Missouri. 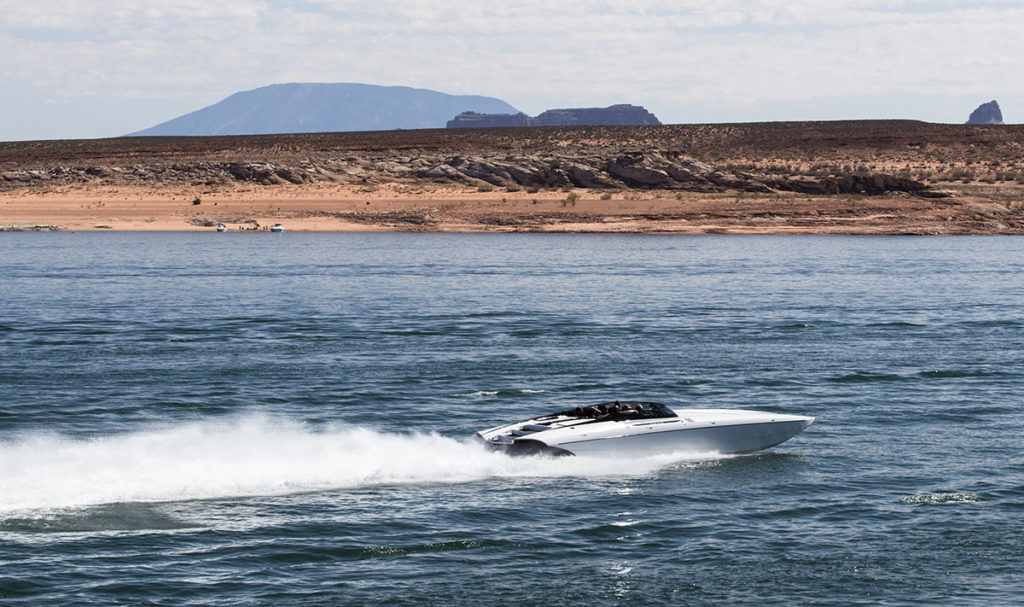 Argyros said he believes the event has grown in leaps and bounds over the past few years for several reasons.

“First of all, Lake Powell is a great lake to go boating on and the scenery is probably the best of any poker run I’ve ever been to,” Argyros explained. “Second, Antelope Point Marina and the way it is set up with the docks and how everybody stays there and goes to the same place after they’re done boating, is super unique. Then there’s the camaraderie, and in my opinion the Lake Powell Challenge is the best I’ve seen in that regard in the poker run arena. Everyone is there for the same reason—to raise money for JDRF—and it’s such an intimate environment with no tension.

“The word has definitely gotten out about this event, which is why there’s more and more people come from farther away,” he continued. “The amazing people, amazing hardware and amazing crew—from the owners and the managers to the staff and the volunteers, there’s not one person who won’t go out of their way for the event participants—make the Lake Powell Challenge what it is. When you have a guy like Bob Teague (of Teague Custom Marine) make this a family trip every year, that says a lot and it continues to spawn more people to attend.”

One participant who has put the Lake Powell Challenge on his calendar for the last five years is California’s Lawrence Coelho, who brought his 28-foot DCB V-bottom to this year’s event. And as luck would have it, Coelho walked away with the top poker run hand, which earned him a couple of VIP passes to the annual Barrett-Jackson auction in Scottsdale, Ariz.

“We had a good time at Powell as usual,” Coelho said. “I liked that the run was a little longer this year. That works to my favor because I go to these events to go boating. That’s why I like traveling to East Coast, Midwest and Canadian events, because they tend be longer runs. I thought the lunch on Friday could have been better; other than that everything was great. The money raised for JDRF is unbelievable.”

After the poker run awards were dispersed, the “Fund A Cure” auction crew went to work highlighting one-of-a-kind items such as embossed DCB and MTI pictures, two “header chairs” from Barrett Custom Marine, a custom-painted Lake Powell Challenge-themed Harley-Davidson and baskets from a couple of families affiliated with the JDRF Mountain Valley Chapter. That part of the evening, which was followed by the impressive Overdrive band, was quite entertaining as the “competition” got intense at points and even featured some good-natured ribbing as well as chicken wing taunts courtesy of Argyros.

In the end, the Lake Powell Challenge, which has an impressive list of sponsors and gets its food donated by one of those sponsors, Sysco, topped itself—again. The craziest part to me is that Argyros, Burl Griswold, the general manager of Antelope Point Marina, and Jerry Moyes, the generous owner behind the marina, expected to do just that. Incredible, almost as incredible as the picturesque Grand Canyon-like lake the event takes place on.