You are at:Home»Awesome»Perfect Weekend Trifecta 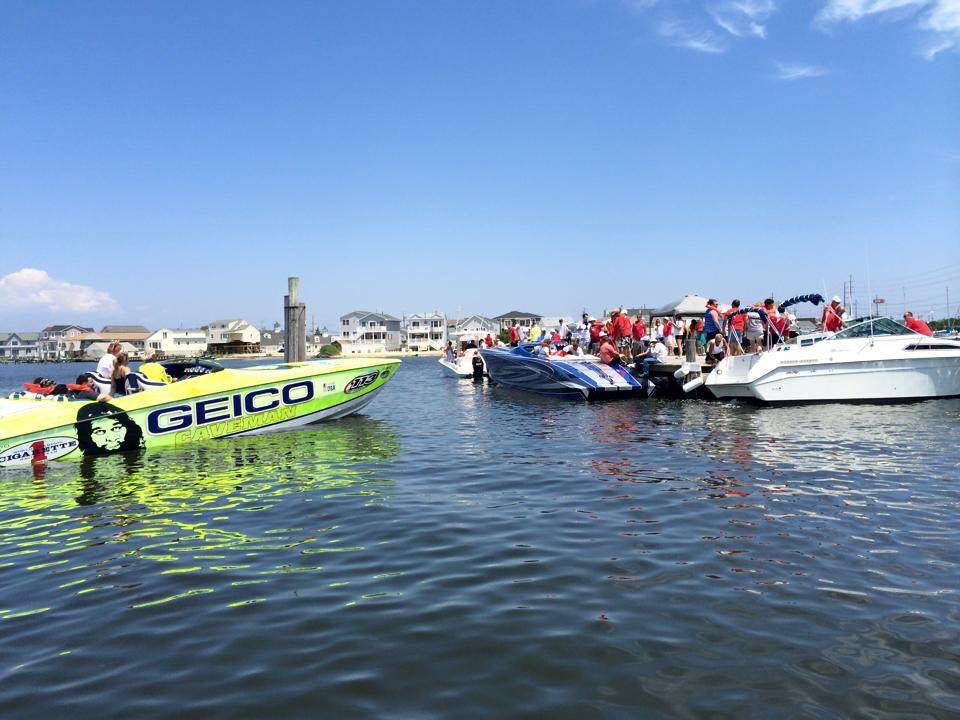 Unless you’re into go-fast boating, you don’t generally think of summer as “The Season of Giving.” But if you are into it and live somewhere that isn’t blessed with a temperate year-round climate—you know, pretty much everywhere other than Arizona and Florida (with the exception of summer)—summer really is the giving season. And we’re in the thick of it right now. Just look at what happened last Saturday.

For 13 years, the good people behind Shore Dreams for Kids have been organizing a day of powerboat rides, carnival-style fun and food for mentally challenged children and adults and their families in Seaside Heights, N.J. Last Saturday, those organizers and an army of volunteers pulled it off again in grand fashion with approximately 900 participants, according to Shore Dreams for Kids board of directors’ president Geralyn Monroe. That the event came off beautifully despite a leadership change—longtime Shore Dreams board members Dave Patnaude and Joe Nasso resigned their positions earlier this year—should surprise absolutely. Monroe, John Marotta and the rest of the Shore Dreams board members and Shore Dreams volunteers are as dedicated and competent as they come.

Approximately 30 powerboat owners shared their rides with the participants on Saturday.

“I guess 13 is truly a lucky number,” said Monroe. “We had a record number of participants registered, and plenty of boat rides that ended early. Everything just worked. We honestly had one of the most organized, smoothest operating events we’ve ever had on land and on the water. The sun was shining bright all day, there was a bit of a breeze and it was a beautiful.”

Boyne Thunder had the largest fleet in its 12-year history and raised serious money for its two charities. (Photo by Pete Boden.)

Meanwhile, just a few hundred miles due south in Virginia Beach, Va., under the same bright sky, 72 performance-boat owners and their guests raised $35,000 for the Susan G. Komen for the Cure Foundation, which is dedicated to cancer research, treatment and patient support during the sixth annual Powerboating For A Cure Poker Run. Organized by the Mid-Atlantic Powerboat Association, the fun began—as it often does during these things—with a Fun Run on Friday to the home of local performance-boat owner Mark Tuck.

How popular is this one with locals and non-locals alike? “We sold out in 60 days,” said Tuck. “It was amazing.”

But don’t ask Tuck (or me for that matter). Watch the video.

And when you’re done watching, make a mental note to jump on registration when it opens for the event in 2016.

Meanwhile, just 900 miles and change to the northwest in Michigan, the Boyne City Poker Run celebrated its 12th anniversary by raising approximately $100,000—with 110-boats entered in its fleet—for its two charities: Camp Quality, which provides outdoor experiences for young cancer patients and their families, and Challenge Mountain, which provides outdoor experiences for physically and mentally challenged youth.

“I’m amazed that in the middle-of-nowhere-Michigan they can get this many people in on an event like this,” said Scott Sjogren, of Sjogren Performance Marine, referring to the street-fest, the thousands of viewers lining the seawalls during the opening “parade lap” and the spectator fleet of a couple hundred boats ranging from 14-foot aluminum skiffs to 110-foot yachts.

Truth be told, it’s not all that amazing—and as a sponsor of go-fast boating events around the country Sjogren knows it well—because on the whole the high-performance powerboating community works hard to give back. Yes, it’s a good public relations move for a group of folks that isn’t exactly embraced by the mainstream boating world, but go-fast powerboat enthusiasts don’t give back to make themselves look good. They give back to make others feel good. They give back because they realize their good fortune, are grateful for it and want to share it. Just ask anyone who participated during this trifecta of events last Saturday, but don’t worry if you missed out. Between now and Labor Day, you’ll have plenty of chances to get in on giving back, and having a great time in the process, before the season ends.