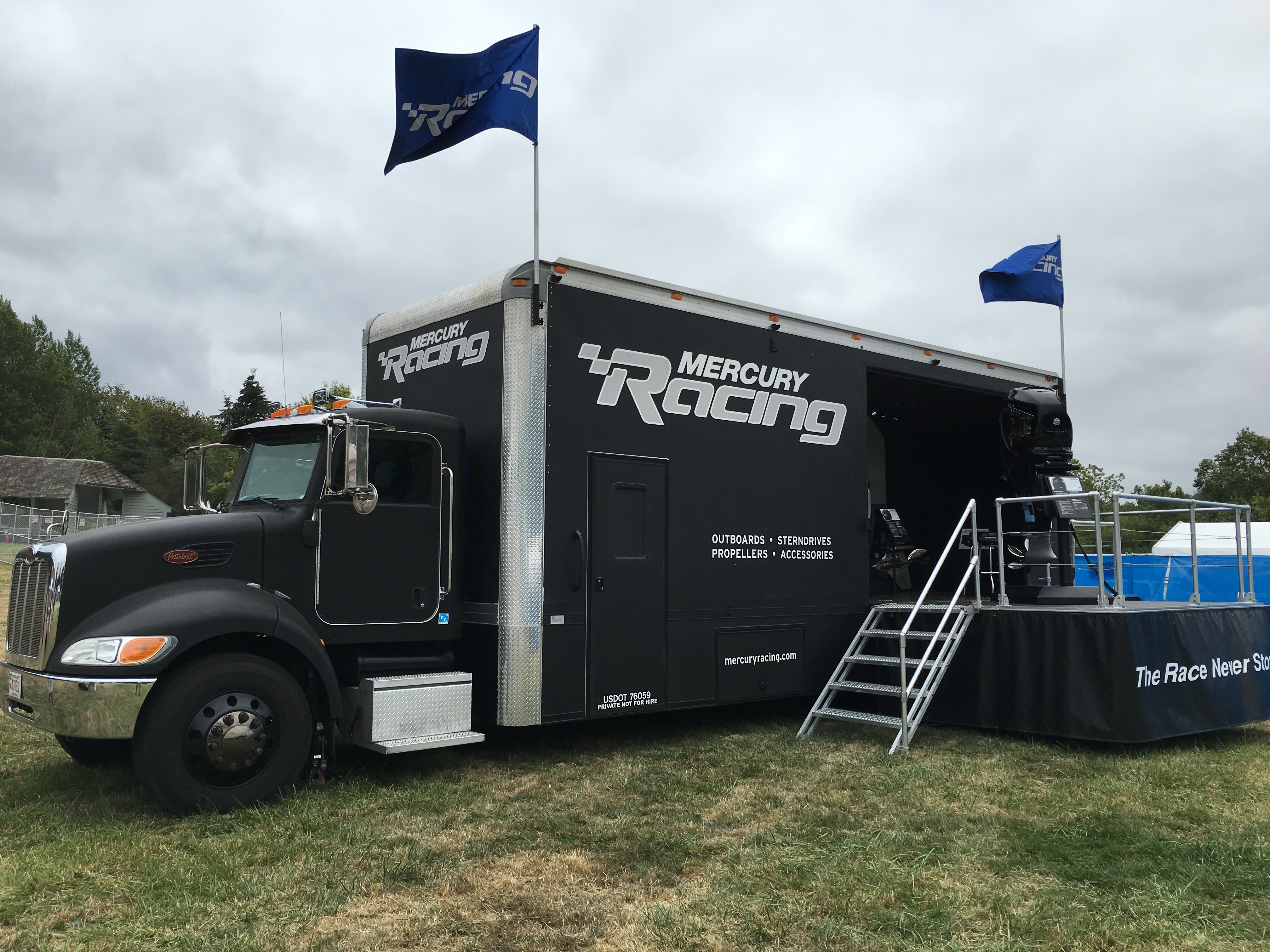 For the second time this summer, The Mercury Racing Experience Truck will at the Lake of the Ozarks.

For the second time this summer, the “Mercury Racing Experience Truck”—a mobile display vehicle that showcases several of the Fond du Lac, Wis., high-performance marine engine and accessory company’s most popular products—will find a home at the Lake of the Ozarks in Central Missouri. In June, the folks at Mercury Racing sent the fan-popular rig to the Cigarette Owners Rendezvous at Performance Boat Center. Starting tomorrow night, the truck will be front and center at the Shootout On The Strip street exhibit sponsored by Waves and Wheels before it finds a more-permanent home for the weekend in front of Captain Ron’s, the host venue for the event.

“The Mercury Racing Experience Truck has been on an extensive tour this summer that I call the ‘Steel Wheels Tour,’ a play on words to promote the experience truck tour of various poker runs and special events, and also to promote our performance propellers,” said Rick Mackie of Mercury Racing. “The official tour started in late April at the Desert Storm Street Party where we also launched our MAX5 propeller. We have been conducting consumer lead management surveys at various events where qualified participants—current performance boat owners—win a Mercury Racing MAX5 T-shirt for taking a short iPad survey. Our official Mercury Racing merchandise was available for purchase on-site at Desert Storm and Boyne Thunder events, just as it will be during the Shootout.” 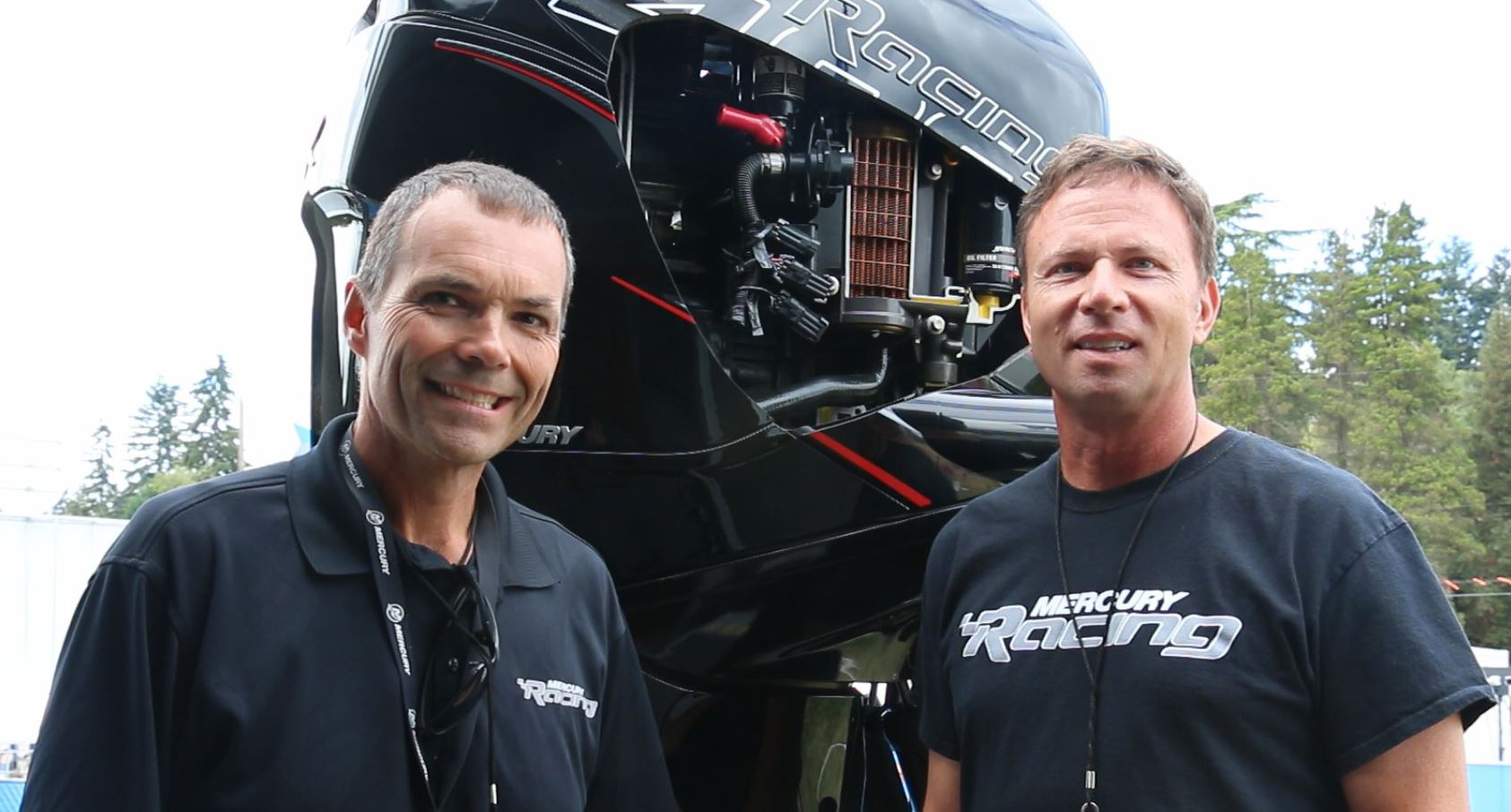 Next stop for the trailer after the Shootout is Key West, Fla., in early November, where it will be stationed in the Florida Powerboat Club’s Poker Run Village during the Super Boat International Offshore World Championships. If you miss it there, well, you’ll have to wait till 2017 to catch it again. And it’s definitely worth catching.

While the truck’s product exhibit is anything but all-encompassing—the company would need a much bigger rig for that—it does include a spectrum of Mercury Racing products including the dual-calibration QC4v 1550 engine featuring a cutaway M8 surface drive, a cutaway Verado 400R outboard engine, Zero Effort and Joystick Piloting controls, a Performance Active Trim display and Mercury’s new VesselView 702 touchscreen monitor.

Sure, it’s a marketing vehicle—like most for-profit enterprises, Mercury Racing is in business to make money. Regardless, it’s one very cool marketing vehicle that’s worth at least a short visit, or even a very long visit. Either way, the folks who staff the truck will be delighted to see you and happy to answer most of your questions. (I say “most” questions because if you ask for a free engine, propeller or accessory you’ll get nothing but stony silence in response.)

“The cutaways are done in-house by the Mercury Marine exhibits department. They are true showstoppers,” said Mackie, who in September will have worked 28 years for Mercury Racing and started with the company’s tunnel-boat racing support truck.

“I’ve always believed the branded vehicle rolling down the road provides immeasurable brand exposure,” he continued. “Even with our digital age, you cannot replace being face to face with customers, fans and potential prospects. Over the years, I’ve met Mercury’s most important dealers, boat builders and key customers first in the field. You can’t replace relationships.”