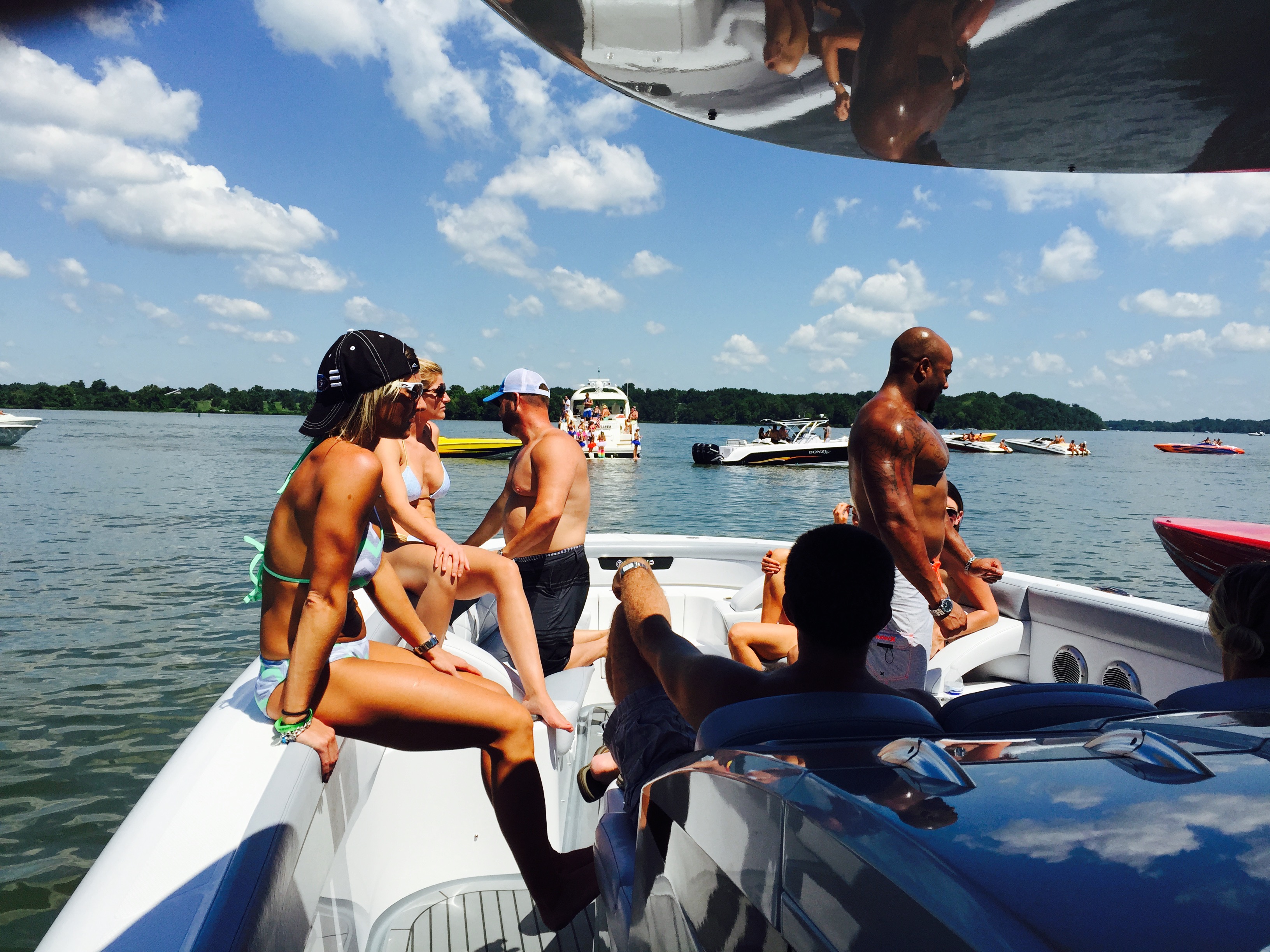 Just visible behind the man in the right of this photo, singer/songwriter Kate McRae went for a powerboat ride during the Old Hickory Fun Run last Saturday afternoon—and came home with Dolly Parton-signed guitar that evening.

Novel as it was, the idea of a hot pizza lunch on the water during a 90-plus-degree Tennessee day didn’t appeal to anyone on our boat during last Saturday’s Old Hickory Fun Run, so we called an audible and made a beeline for The Rudder restaurant, a waterside joint at Anchor High Marina in Hendersonville. On board Vinnie Foglia’s M3900 Mystic center console were Scott Sjogren of Shogren Performance Marine, Foglia and several guests including Kate McRae a young Nashville-based singer/songwriter.

Lunch off the water turned out to be a perfect call, but it lasted longer than expected. Short on time, we opted to skip the afternoon raft-up and head back to Sam’s Sports Bar at Blue Turtle Bay Marina, home base for the event, and then pop back to Nashville to clean up before returning to the marina for the evening’s festivities.

Through the beauty of Bluetooth technology, McRae played one of her songs—a compelling country-rocker called “Warning Label”—for us on our way back to the marina. And we were blown away by her voice, one we hope to hear played (and maybe even overplayed), on the radio someday soon. 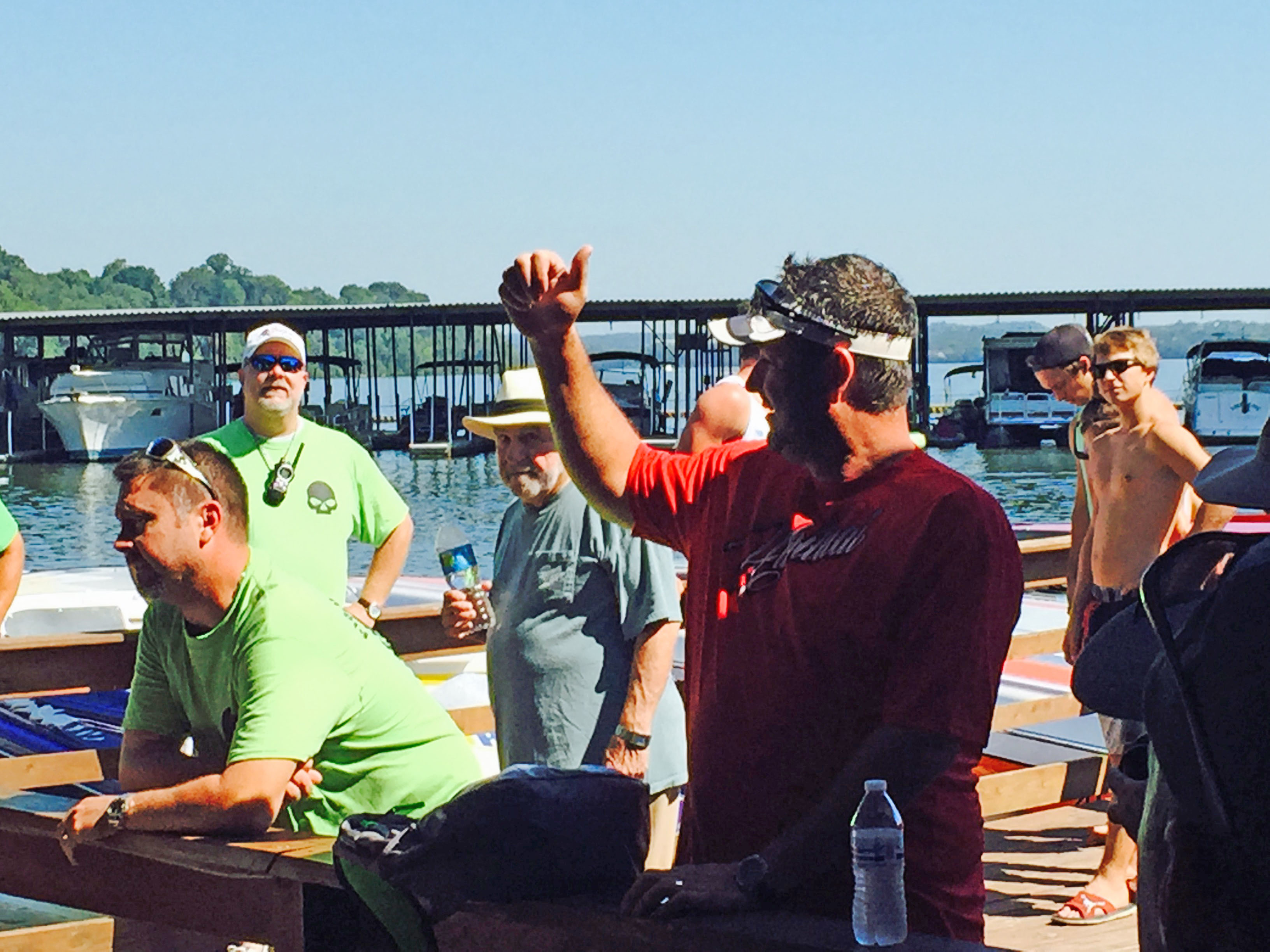 Organizer Chad Collier: “Our event was such a humbling experience. You work so hard for so long to get something like this organized.”

During that evening’s silent auction, the proceeds of which went to the Wounded Warrior Project, Foglia bid on and won a guitar signed by Dolly Parton. That guitar now belongs to McRae because Foglia gave it to her.

This is the kind of stuff that happens when an event that is all about giving back, and it is the essence of the Old Hickory Fun Run, which pulled an event record of 107 powerboats this year. Yes, organizer Chad Collier, his infinitely supportive wife, Heather, and the small army of volunteers who made the event sing took the “fun” part seriously. But what makes all the fun, well, a whole lot more fun is that the two-day event centers on the simple notion of giving back.

Welcome to the Volunteer State, which comes by its name honestly.

Although the final total of money raised for the Wounded Warrior Project isn’t in, the auction itself plus additional donations during the evening raised roughly $30,000. But by the time all the proceeds are counted, they could exceed $60,000—and may go even higher than that. 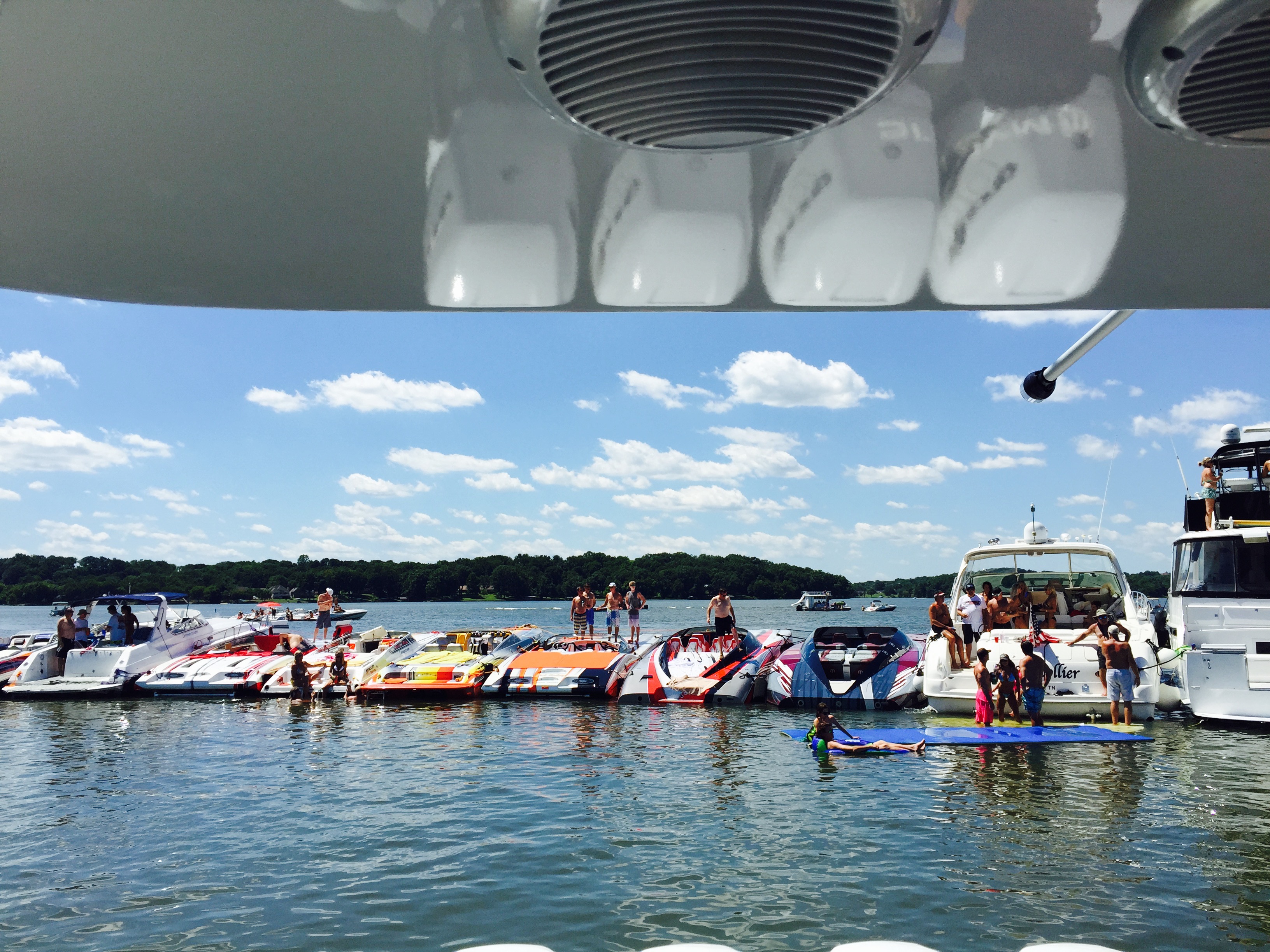 Though the Mystic M3900 center console crew skipped Saturday’s on-water pizza party, it was on hand for Friday’s casual lunch stop and raft up.

“That was all thanks to the generous hearts of such a great group I can call friends,” said Collier. “I asked around and got a rousing ‘Yes!’ to us donating 30 percent of the money we raised this weekend to a fund in benefit of the families of the five brave men who had their lives stolen from them so needlessly in Chattanooga a couple weeks ago. We are the Tennessee Powerboat Club, and we all feel like we should do something for this tragedy that happened so close to home for many it our members.

“On a personal note our event was such a humbling experience,” he continued. “You work so hard for so long to get something like this organized. All you can hope for is that everyone shows up and has a good time, that we raise some money for a good cause and that everyone stays safe. I think we succeeded this weekend. And I really want to thank my sponsors and ask everyone go to the club’s website, look at our long list of sponsors and do me a favor and make choices to patronize those businesses. Because without them, this event will not happen.”