It didn’t matter if the course was three-quarters of a mile or the previous one-mile distance, it was the slowest boat I’ve ever seen run at the Lake of the Ozarks Shootout in Sunrise Beach, Mo. Yet, at the same time, it was one of the most talked-about boats at this year’s 30th annual event.

I’m talking about the electric-powered 23-foot Calypso Classic, a boutique-style center console fishing boat that sped down the course on Saturday at a whopping 25 mph. And get this, Randy Vance, one of the editors at Boating magazine, was thrilled with that speed since he tested the boat the day before after launching it at Shawnee Bend and only reached 23 mph. 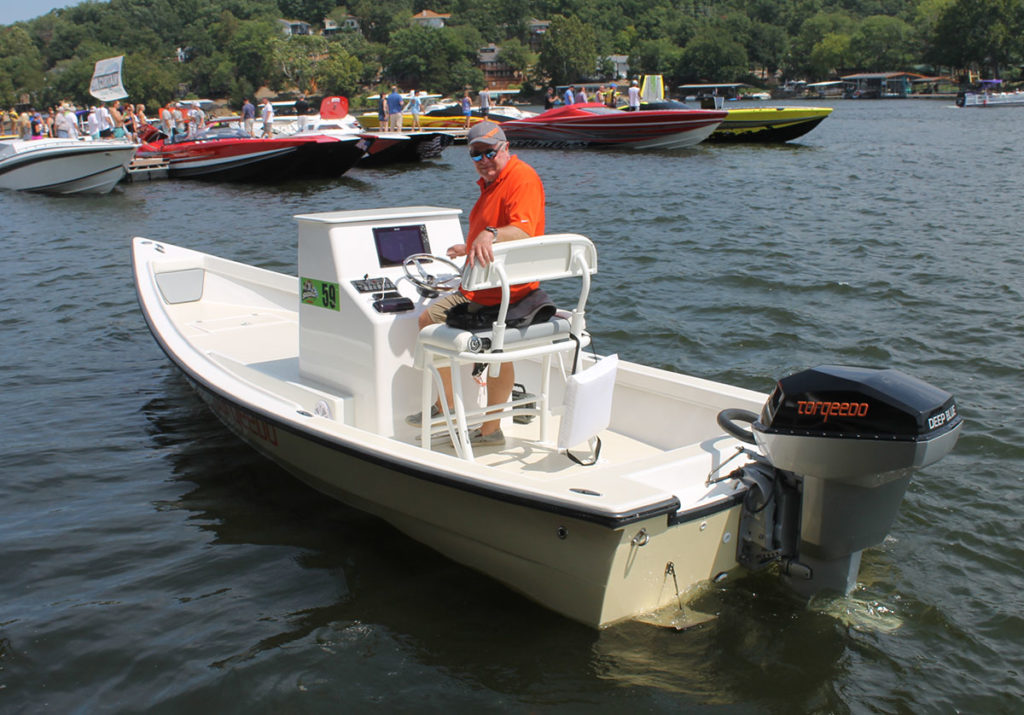 Boating magazine’s Randy Vance was proud to show off the Torqeedo-powered boat at the docks of Captain Ron’s. Photo by Jason Johnson

“Both Torqeedo and Boating magazine wanted to figure out a way to help promote the growth of electric outboards—of course Torqeedo is one of the company’s on the spear point of that—so we asked them about doing a boat together and they said they’d love to do it,” said Vance, who was on hand at Lake of the Ozarks with Steve Trkla, the president of Torqeedo Inc., a wholly owned subsidiary of Torqeedo GmbH located in Crystal Lake, Ill. (Founded in 2005, the parent company is headquartered in Starnberg, Germany.) “We told them we’d be happy to cover it and they asked me if I’d drive the boat and I said I’d love to run it. The team at Torqeedo has been working on the boat for about five months. There’s a lot of custom work that they did in here to get the boat ready.”

According to Trkla, the boat is powered by a single 80-hp, 66-kilowatt Deep Blue outboard power plant that expends energy from Torqeedo’s high-capacity Deep Blue batteries with BMW i technology. Thanks to a cooperation with BMW i, Torqeedo has made state-of-the-art automotive battery engineering available for the marine market utilizing the technology introduced in the BMW i3 and BMW i8.

Equipped with an 80-hp Torqeedo outboard, Randy Vance drove the first electric-powered boat along the Lake of the ozarks Shootout course on Saturday. Photo by Jeff Helmkamp/Helmkamp Photos

Thanks to previous research on electric marine motors, I knew Torqeedo was no stranger to the market, but I didn’t know the company was as wide-ranging as it is. Currently Torqeedo offers 32 electric boat drives ranging from 1 to 80 hp as well as hybrid engines between 40 and 160 hp and innovative accessories such as solar-charging technology and a couple of its own low-voltage power lithium batteries. Trkla said there is more to come in the future, too.

When asked about this project specifically, Trkla gave credit to Captain Todd Simms, who founded EPower Marine in Boynton Beach, Fla., more than a decade ago and is one of Torqeedo’s sales directors for its high-power products. Simmons, Trkla said, recommended the Calypso boat for its handling capabilities and aerodynamics as well as the mold design that makes it relatively easy to install the system.

“We’re still trying to optimize the boat, but we’re happy with how it ran at the Shootout,” said Trkla, who worked with Turning Point Propellers in Jacksonville, Fla., to dial in the boat. “We think there is more, but at this point the 14” x 11”-pitch aluminum propeller works best. We started testing with a 14” x 13” and then we tried a 13” x 15” thinking we’d get more speed and it was actually worse. There’s more to come, we’re going to keep after it.”

When Torqeedo opened its U.S. operations in 2007, the company had one product—a 4-hp model—according to Trkla. Today, he said, Torqeedo has sold more than 80,000 units worldwide and is considered “the Tesla of the water.”

A first-timer to the Shootout just like Trkla, Vance called the event “impressive.”

“We’ll be back—I’m sure there will be some competition next year,” Vance said. “We’re just trying to get people to recognize you can boat electric on a gas lake. And it can be a pleasant experience. There’s no exhaust and no noise, and it’s so smooth with electronic throttle, making it easy to operate.”

Trkla, who said the boat, as equipped, costs around $70,000, called out some other advantages to boating electric, including the fact that Torqeedo warranties the batteries in the boat for up to nine years.

“Having an electric boat here was different and innovative,” said Ron Duggan of Captain Ron’s Bar and Grill, the host location for the event. “I had heard they were coming, but I had no idea what speed they would run. Was it exciting to watch? Hardly, but like anything else, you never know what strides are going to be made in the near future. Maybe one day we’ll have several electric boats compete, or who knows, maybe we’ll see an electric boat run 100 mph.”