You are at:Home»Awesome»The Whispering Touch 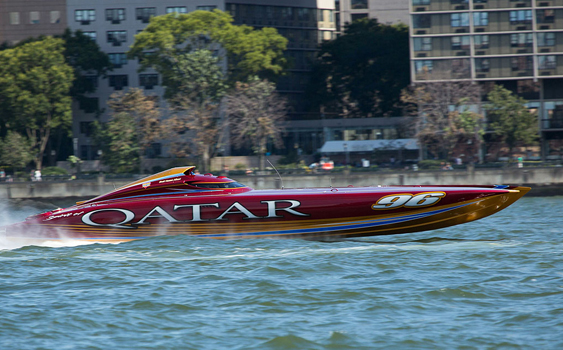 Thanks to the expertise of Whispering Turbines, the Qatar Team is expecting big things out of its new offshore race boat, Al Adaa’am 96, a 50-foot catamaran from Mystic Powerboats. (Photo courtesy of Qatar Team.)

For Adam Bratvold, the son of the father-and-son team behind Whispering Turbines in Hamilton, Mont., this summer has been extremely busy and will continue that way up until he catches his flight home from the Super Boat International (SBI) Key West World Championships in November.

After running into Bratvold in Missouri at the Lake of the Ozarks Shootout last month and then again in California at San Diego Bayfair earlier this month, I had to find out for myself just how hectic Bravtold’s summer had been since I knew Whispering Turbines was also supplying the turbine engines for the Qatar Team’s new 50-foot Mystic Powerboats catamaran along with a couple of other offshore pleasure boats.

“Whispering Turbines has been very busy the last couple of years, not only with the boats and aviation, but also with the oil fields,” said Bratvold, whose father, Tracy, started the business in 1989 with his wife, Cindi. “We’re building a lot of engines for water pumps and frac units and stuff like that. Business has been good and we’re still upholding our great reputation for putting out one of the best products as far as gas turbines are concerned.” 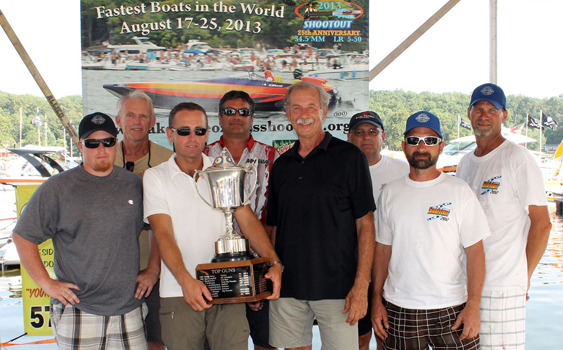 After shattering the Lake of the Ozarks Shootout record with a 224-mph run, the My Way crew, including Adam Bratvold (far left), throttleman Ken Kehoe (third from left) and owner/driver Bill Tomlinson (fifth from left), celebrated a safe and exciting event. (Photo by Jason Johnson.)

I began the interview by congratulating Bratvold on the record-setting performance of the 3,000-hp T-55s in Bill Tomlinson’s 50-foot Mystic, My Way, which took home the Shootout’s Top Gun award with a 224-mph top speed. Even Bratvold was impressed by Tomlinson’s run.

“That was a very stunning performance from those guys,” Bratvold said. “You know Bill has worked so hard on that boat in the last three years. There are a lot of guys who have big hopes and dreams of breaking records and stuff like that. For Bill to have the setbacks he’s had along the way and to continue on the path he did to actually realize his goal is amazing. And he didn’t just break the Shootout record by two or three miles-per-hour but by 15 mph. Then he followed that up with a run seven miles-per-hour faster (than the previous 209-mph record) just to prove that it wasn’t a radar fluke.

“As equally cool as it was, it made me nervous,” he continued. “I mean that is fast, that is so fast. We have received a few phone calls from people who say ‘I want to go beat Bill Tomlinson’s record.’ They see it’s possible, but we’ll see. The difference between 209 mph and 224 mph is, well let’s just say an additional 100 hp isn’t going to get you from here to there. So to go out and actually beat Bill’s record, someone is going to have to do it better and more efficiently than Bill. It’s going to take one hell of a crew to put something together a little better than [My Way].” 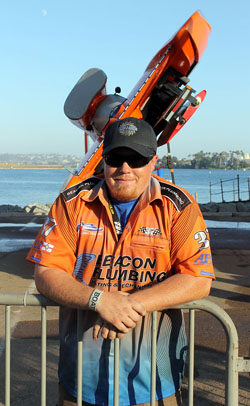 Adam Bratvold (pictured) and his father, Tracy, have been involved in supplying and servicing turbine engines for the Unlimited hydroplane series for more than 20 years. (Photo by Jason Johnson.)

One team that could threaten Tomlinson’s record is another Whispering Turbines customer—the Qatar Team, which debuted its new 50-footer a few weeks ago in New York and will be racing this weekend in Clearwater, Fla., in the SBI National Championship.

“The Qatar Team guys are so professional and so thorough in what they do—it’s a relief to work with guys that have the same mindset as you do when it comes to racing and rigging and just doing things the right way the first time,” Bratvold said. “They’re also just a great group of guys to hang out with and work alongside. There’s definitely a learning curve going from piston engines to gas turbines. But ultimately we would like to show them that turbines are more reliable and a little bit faster and better performing than what they’re used to. We’re on the road to accomplishing that. In Key West everybody is going to see a very fast Qatar boat.”

Add in the H1 Unlimited series that Bratvold runs around with all summer and you can see why he says he’s been busy. This year, he supplied the engines for the U-37 Miss Beacon Plumbing hydroplane owned by Jane and Billy Schumacher and driven by J. Michael Kelly. The team finished fifth overall after the seven-race season concluded in San Diego two weeks ago. So at least that racing season is off his plate for the time being.

“As of right now we have more than a winter’s amount of work lined up,” he continued. “We’ll be busy putting out some more great performance engines and we’re going to continue to help race teams and pleasure boats be as safe as possible but as fast as possible.”