You are at:Home»Awesome»Up For The Cup 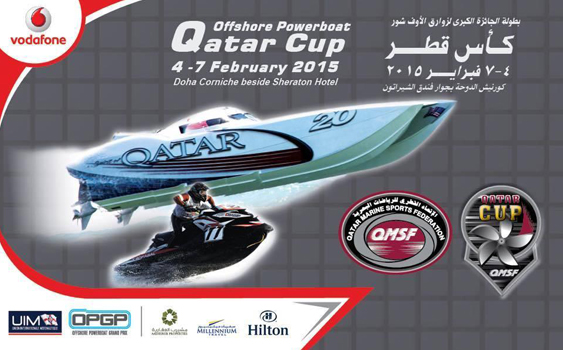 The U.S. contingent for the Qatar Cup heads for Doha Sunday.

When Qatar Airways Flight #778 departs Miami at 7 p.m. Sunday evening, the Boeing 777 aircraft’s Economy Class will be littered with offshore racers and their crews, well-known powerboat racing photographer Pete Boden, at least one journalist and a slew of supporters. To that end, I would like to apologize in advance to the rest of the passengers flying Economy to Doha, Qatar, that night. Because I suspect—strike that, I know—that everyone on board headed for the inaugural Qatar Cup will be pretty excited. And pretty excited can translate to very loud.

Plus, there will some, well, large personalities on board. I’m not sure anyone in the entire Qatar Airways organization has ever met anyone like Micheal Stancombe of the Peppers Racing team. Dan Lawrence of The Hulk team? Yeah, now there’s a mellow, low-key guy. Ryan Beckley? The guy practically bleeds adhesive vinyl and outboard engine fuel. And while Randy Swears of Racing for Cancer could be the most soft-spoken racer in the group, he’s also about 12 feet tall and kind of hard to miss. (OK, I exaggerate for effect, but you get the idea.)

Having covered a Union Internationale Motonautique Class 1 Grand Prix in Norway, the 24 Hours of Rouen in France, an offshore endurance record in Peru and the Powerboat P1 Grand Prix of the Sea in Malta, I can state with absolute certainty that most of the teams have …  absolutely no idea what we’re getting into. (Nor do I.) And to some degree, that could be why 12 teams from the United States signed on for the Qatar Cup—it’s an adventure into the unknown. And the unknown is only 14-plus hours at 500-plus-mph away on a jetliner from Miami.

Yes, in the interest of full disclosure—although it’s never been hidden—the Qatar Marine Sports Federation is paying the way for all the teams and invited media, which includes me and Marc Granet, the Miss GEICO Offshore racing team driver, who will help cover the event. (Granet will fly with the rest of the circus on Flight #778.) But the 12 outfits heading to the Qatar Cup represent a fraction of the offshore racing that could have gone on the QMSF’s nickel, so it really isn’t about the “free trip.”

For the first time ever, an entire group of U.S.-based racers is going to the Middle East to compete against an international field.

Despite all the loyalist rantings you’ll find on offshoreonly.com, competing in the Qatar Cup also isn’t about politics or partisanship. From what every racer who is going has told me, and that means most of them, participating in the Qatar Cup has zero to do with supporting the newly formed (and yet to run a single race) Offshore Powerboat Grand Prix series over Super Boat International.

For the teams headed to Doha from Miami Sunday night, competing in the Qatar Cup is about seizing a once-in-a-lifetime opportunity. For the first time ever, an entire group of U.S.-based racers is going to the Middle East to compete against an international field. With one day of Pole Position competition and two days of racing, the amount of time the racers will spend in their cockpits is tiny compared to the time they’ll spend just getting there.

So why bother? Because this an adventure of epic proportions. And for a lot of folks in the offshore powerboat racing community, plus one journalist who covers it, that’s enough.