You are at:Home»Awesome»Up for the Dam Challenge? 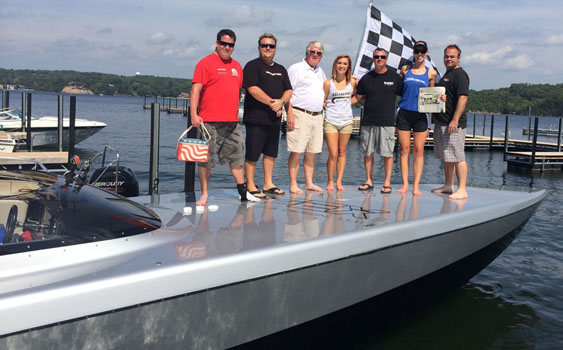 City Alderman Jerry Morowski and Beavers at the Dam’s Destiny McMurray (both in white) joined the team—from left: Michael Donahue, Shane Sherman, Tyson Garvin, Tristan Collins and Andy Sanders—on the deck of the Skater after the run.

After getting pre- and post-run reports from Shane Sherman and checking in on the team’s progress via a GPS tracking system throughout its record-establishing Dam Challenge adventure on Missouri’s Lake of the Ozarks last Saturday, it hit me that even if the grassroots-style record run was a bit spontaneous, the unique challenge just might catch on.

The team completed the 188-mile roundtrip endurance run from Bagnell Dam to Truman Dam and back, which was sponsored by Performance Boat Center and Beavers at the Dam and logged into the Lake Ozark Timing Association record book, in 2 hours, 29 minutes and 49 seconds. The time included ringing a start bell at the Beavers at the Dam docks and then running (LeMans style) to the boat, and getting out at the Truman Dam courtesy docks, ringing another bell and getting back in the boat for the return trip.

Sherman, who has received several calls from people interested in doing the run (Garvin already has too), called the experience one of a kind. During a conversation late Saturday night as Sherman was driving from the lake to St. Louis, it was clear he was proud of the team’s effort as well as creating a “challenge” he hopes the boating community embraces. 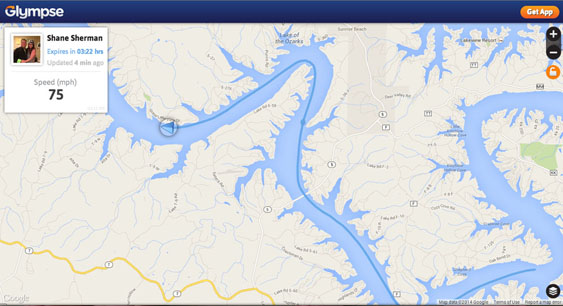 The GPS tracking system, Glimpse, provided an easy-to-use look at the team throughout the Dam Challenge on Saturday.

“We had a blast on Saturday—that was one of the more fun days I’ve ever had on the lake,” said Garvin, who last fall used the 39-footer to break the 780-plus-mile Bermuda Challenge from New York to Bermuda with teammate Chris Fertig. “Part of the reason we decided to do it was because we’ve heard people talk about how fast they could get from dam to dam for years, but no one had done anything about it. Now, I think more people will try it. Whether they go for a record or just boat to one dam, have lunch and head back at their leisure, the Dam Challenge is more about the accomplishment than the time. 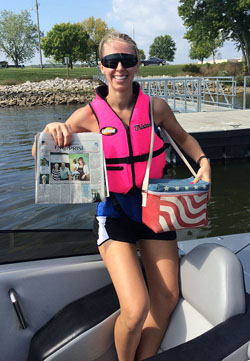 Tristan Collins holds a newspaper that proves the team set foot on the Truman Dam courtesy docks before making the return trip to Bagnell Dam.

“One of the things I want to stress to people is that we weren’t trying to be crazy serious with the run, we just gave it our best shot,” he continued. “I do think we set the bar high, but whether or not we think anyone could beat our time—and there’s lots of people who could beat it—we’re all real proud of what we accomplished.”

Garvin said there are plans to showcase a top-tier trophy at Performance Boat Center and add a display at Beavers for those who complete the Dam Challenge to post their names and boat information. He’s already thinking shirts with “I Did the Dam Challenge” (or something like that) as souvenirs for the accomplishment.

Whether the Dam Challenge turns into a phenomenon like “I Hiked the Grand Canyon” or “The Empire State Building Run-Up” is anyone’s guess. I do believe that because it will be open to a variety of classes from outboard-powered boats and personal watercraft to catamarans and pontoon boats, the potential is there. Heck, a human-powered class (think kayak or standup paddleboard) is even a possibility.

And who knows? Maybe this takes off and becomes something that other communities can embrace to promote fun, purposeful boating on their local waterways. For more information on a record attempt of your own and a description of the rules and classes, contact Sherman at [email protected].