You are at:Home»Awesome»Vector Martini Racing Prepares to Shake Up Europe 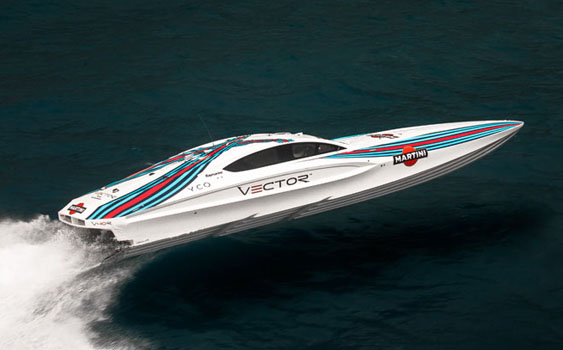 The Vector Powerboats V40R is powered by twin 725-hp engines from Ilmor Marine.

I guess I was asleep at the wheel when I missed the unveiling of the new Vector Martini Racing boat, which took place at the Monaco Grand Prix at the end of May. A while back, I remember hearing about a new raceboat from Vector Powerboats and its London-based distributor, Vector World, that was expected to participate in some overseas endurance races, but this—the first boat to feature the Martini racing stripes in a couple of decades—was news to me.

It had been a while since I caught up Rex Jardine, who founded Vector Powerboats in 2005 when he launched the V28, which was based off of Ocke Mannerfelt’s batboat design. I think I ran into him a couple of years ago at the Desert Storm Poker Run in Lake Havasu City, Ariz., but that’s inconsequential. Thanks to a heads up from the fine folks at Livorsi Marine, who provided parts for Vector’s latest V40R raceboat, I reached out to check in with Jardine on Tuesday.

Jardine said the second 40-foot raceboat built by the talented Vector team in Kelowna, British Columbia, was on display and available for rides at the Monaco Grand Prix in conjunction with the return of Martini to the Formula 1 series as the title sponsor of the Williams Martini Racing F1 team. 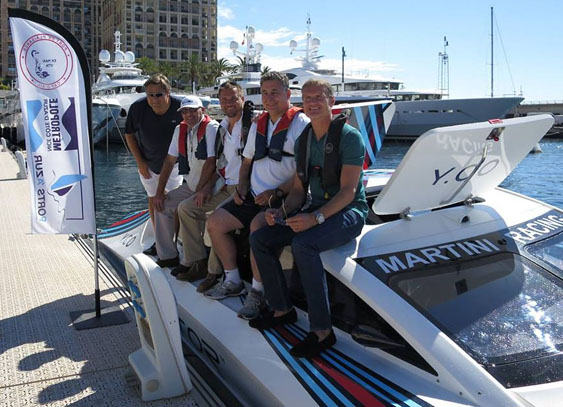 The Vector Martini Racing team proudly takes a picture with its raceboat at the Monaco Grand Prix in May.

Even over the phone, Jardine, who normally doesn’t show much emotion, was ecstatic about the exposure at such an iconic venue. He said the V-bottom, which is equipped similarly to the Lucas Oil V40R raced by Nigel Hook in the former Powerboat P1 Evolution class, treated hundreds of celebrities, dignitaries and guests to flawless demonstration rides throughout the race weekend.

Now back at its home in London, the Vector Martini V40 will continue testing and preparing for some record-setting endurance runs in and around the United Kingdom and Europe, according to Jardine.

“World champion offshore racer Peter Dredge, who holds something like 15 endurance records and has a couple of world championships to his credit, is a partner in the team so the leadership doesn’t get any better,” said Jardine, adding that the vacuum-infused, carbon-fiber/Kevlar boat weighs about 10,000 pounds dry and is powered by twin Ilmor Marine 725 engines connected to Mercury Racing No. 6 drives. He said the 40-footer runs faster than 100 mph with its current setup. 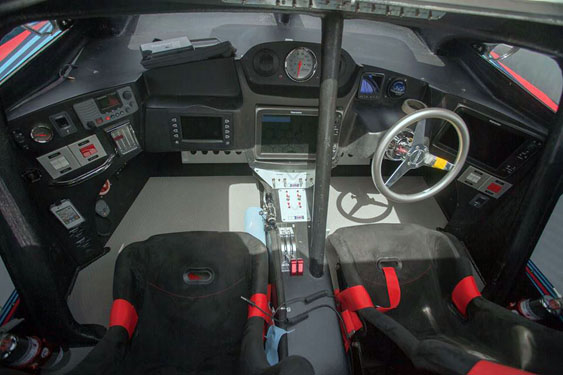 The cockpit of the 40-foot raceboat features suspension seats and all the bells and whistles a driver and throttleman need.

In a press release from Martini, the world’s leading vermouth and best-selling Italian sparkling wine brand, Mal Crease, the founder and CEO of Vector World and the race team, said, “[I]t’s an honor to be the first British powerboat team to wear the famous Martini stripes—they sure make for some cool graphics on the boat in my opinion.” He also said he can’t wait to bring the excitement of offshore endurance racing to a whole new global audience through the unique partnership with Martini.

“Our relationship with powerboat racing started in 1973 and the new partnership with Vector creates an exciting new chapter in this history,” said Sandy Mayo, Martini’s global category director. “The V40R boat with its Martini Racing stripes looks amazing and we are delighted to form Vector Martini Racing to participate in competitive offshore racing once again.”

An aside, Jardine told me that business has picked up overall for Vector Powerboats, stating that the company has several boats in production, including a couple of 40-footers, which have grown in popularity outside of North America.

Stay tuned for more from Vector Powerboats. And if you want to see the 40-foot raceboat in action, check out the videos below.